"Then pealed the bells more loud and deep:
God is not dead, nor doth He sleep;
The wrong shall fail,
The right prevail,
With peace on earth, good-will to men."
- Henry Wadsworth Longfellow (Christmas Bells, 1863)

Molly Thynne was one of the long-lost, forgotten mystery novelist from that luminous era, the Golden Age of Detective Fiction, but her neglected body of work has recently been exhumed by the Dean Street Press and this consisted of half a dozen mystery novels – three of them standalones and the remaining ones are part of a short series. All three of those concern the exploits of an elderly Greek chess maven named Dr. Constantine.

I previously reviewed the excellent Death in the Dentist's Chair (1932) and He Dies and Makes No Sign (1933), but the series commenced with The Crime at the Noah's Ark (1931), which is subtitled "A Christmas Mystery." They were released in the twilight of this year’s summer and late August was a bit too early for a Yuletide mystery, but the holiday season is now steadily approaching. Well, that and I already reviewed three Christmas mysteries last month: J. Jefferson Farjeon's Mystery in White (1937), Winifred Peck's Arrest the Bishop? (1949) and a short story, entitled "The Christmas Bear," by Herbert Resnicow. 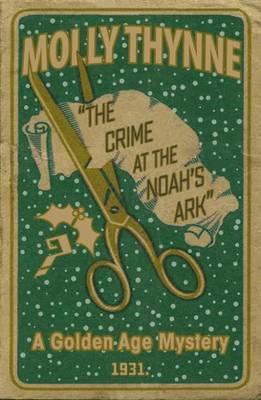 So I wanted to resume my reading of these wintry tales in an attempt to eliminate as many of these seasonal-themed mystery novels and anthologies from my TBR-pile as possible, because we're only six weeks removed from Christmas Day. Let's get this snowball rolling!

The Crime at the Noah's Ark is Thynne's fourth mystery novels, but the first one to feature her series-characters, Dr. Constantine and Detective-Inspector Arkwright, who crossed paths in a spacious, rambling and old-fashioned establishment – a remote inn called the "Noah's Ark." However, the inspector appeared fairly late in the story. So this is the only reference to Arkwright in this review.

A far more important character is Angus Stuart, a rising author with a bestseller to his name, who decided to enjoy the spoils of his success by spending the Christmas holiday at an expensive, seaside resort. Unfortunately, the never-ending snowfall threw a spanner in the works. The snow was so persistent that even "the children grew tired of snowballing" and "the most confirmed among the sentimentalists began to grumble," but, day after day, "the drifts rose higher and higher in the country lanes" – a week before Christmas the roads showed signs of becoming so blocked that it threatened the plans of holiday-makers. And this was certainly the case for Stuart.

Stuart is one of those holiday-makers who failed to reach his intended destination and ended up in a remote, snowed-in inn, the "Noah's Ark," which is well known to hunters and, if it weren't for the heavy snowfall, would've been filled to capacity. So there's enough room to provide a warm shelter for stranded travelers and there’s an interesting collection of characters housed underneath its roof.

First of all, there are two sisters, Amy and Connie Adderley, who were stranded in the snow, but Stuart saved them from their difficult position and drove the sisters (alongside their chauffeur) to the inn. Other guests already there include the Romsey clan, which are represented by Lord Romsey and his three adult children: Victoria, Angela and Geoffrey. Another guest from the upper crust of society is the widow of a rich American banker, Mrs. Van Dolen, who is known for the number of husbands she tried and as the owner of an emerald girdle. She is accompanied by her secretary, Miss Hamilton. Mrs. Orkney Cloude is an attractive and "an exceptionally charming lady," but turns white as a sheet when she sees Lord Romsey. Major Carew is "a proper bounder" and a drunk who will be at the root of some of the problems at the inn. Trevor is an accountant's clerk and very, very shy. Felix Melnotte is a gigolo (i.e. dancer) who was suppose to ply his trade at the resort, Redsands, where Stuart was planning to spend the holiday. Finally, there's Soames, a commercial traveler, and Dr. Constantine, who are both enthusiastic chess players. So they spend some of the dark, cold evenings hunched over a chessboard and locked into a battle of wits.

Well, the severe winter weather has condemned these people to spend Christmas together and Dr. Constantine observes that they're "as completely isolated from the outside world as the inhabitants of the original Noah's Ark," but I found the snowy encirclement of the inn to be reminiscent of a large snow-globe – which is regularly shaken and rocked by strange, nighttime disturbances. A masked figure has been seen in one of the long, dark passages on the first night and this caused some commotion, but this incident proved only to be a prelude.

Major Carew's drunkenness culminates in an altercation with Miss Hamilton and Trevor, who jumps to her defense, is given "a crimson nose." So they decide, for everyone safety, to lock Major Carew up until he's sober again, but that same night a rope is seen dangling from his bedroom window and everyone assumes he escaped to the balcony below – resulting in a midnight search of the premise. During this search, they discover that someone ransacked Mrs. Van Dolen's room, while she was sleeping, and took her emeralds. They also find the body of the major tucked underneath a blanket in his bed: his fractured head resting a blood-soaked pillow. The hostelry was abound with bloody murder and thievery!

However, as contradictory as it may sound (especially coming from an unapologetic classicist), but the violent death of Major Carew is a cosmetic imperfection of the plot. He should've had a bad heart, due to his bad lifestyle, which then gave out during the confrontation with the murderer. If you've read the book, you know it would fit the situation (and the simple plot) a whole lot better, because now the culprit seems stupid for leaving a battered corpse behind. Particularly when you learn the fate of this person in the last chapter.

Otherwise, the plot is pleasantly busy and has a plethora of plot-threads, which the largely sedentary Dr. Constantine calmly untangles and these include hidden relationships, background stories and several secret identities – which go hand-in-hand with the nightly prowls. And while I would not rank The Crime at the Noah's Ark alongside the excellent Death in the Dentist's Chair, it's miles ahead of He Dies and Makes No Sign. A worthy addition to the stack of Christmas-themed mystery novels so many of us loves to read (and re-read) around this time of year.

So if you're sick and tired of endlessly re-reading Agatha Christie's Murder for Christmas (1938) and Ngaio Marsh's Tied Up in Tinsel (1972), you might want to consider adding The Crime at the Noah's Ark to your yearly reading list for November/December. Or check this list that I need to update one of these years.

Well, the next blog-post will probably be of a collection of short stories that may or may not be related to the theme of this review. So stay tuned!
Geplaatst door TomCat on 11/11/2016