"Impossible is a word to be found only in the dictionary of fools."
-  Napoléon Bonaparte

Back in October, "JJ," posted an open invitation on his blog, "John Dickson Carr is Going to Be 110 – Calling for Submissions," which gave everyone who wanted to participate a two-month notice and this was sufficient time to prepare – as even I managed to write and schedule this review well ahead of the deadline. Yes, I actually prepared a blog-post in advance! I'm that much of a fanboy for John Dickson Carr.

And picking my Carr-related subject was even easier than preparing this blog-post: the habitually overlooked and criminally underrated Captain Cut-Throat (1955), which is a thunderous blend of ghostly murder, espionage and adventure set in Napoleonic France. Regardless, the book never managed to emerge from the shadow of Carr's better-known historical work (e.g. The Devil in Velvet, 1951), but (at least) deserves to have its existence acknowledged. So let's put some polish on its name recognition! 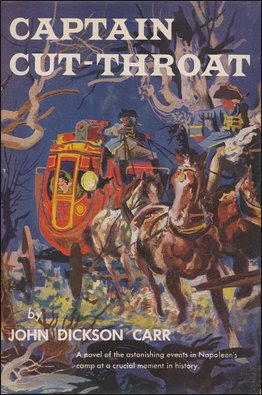 Captain Cut-Throat takes place during the warm summer days of August 1805, when "the shadow of the new Emperor lay long across Europe," who has been amassing an invasion force, called the Armée d'Angleterre, "along the whole length of the Iron Coast" – restlessly awaiting the Imperial order to begin the invasion of England. Their stationary position made the soldiers bored, fidgety and restless, but their attention was soon to be occupied by a murderous, wraithlike creature sneaking around the military encampments at Boulogne.

On the night of the 13th August, this shadowy figure began to murder sentries "like a ghost," because he couldn't be seen "even when he walks in the light." It began as a series or relatively ordinary stabbing deaths, but, "step by step and murder by murder," the killer moved from "a point far outside the camp to its very center," which culminated in a seemingly impossible murder. Grenadier Émile Joyet, of the Marine Guard, was one of the sentries patrolling the lighted, oblong enclosure round the Emperor's cliff-top pavilion, but he suddenly shouted, doubled up and collapsed – stabbed through the heart. The other sentries, who could observe "the whole lighted space," both inside the fence and outside, swear they had not seen a soul anywhere near the spot where the stabbing took place. As if the murderer had been invisible!

After some of the killings, the weapon was left behind, namely bloodstained daggers, but in every single instance there was a scrap of paper: signed "Yours sincerely, Captain Cut-Throat." Since the night of the second murder, the Grand Army has talked of nothing else.

The murders came to the attention of the Emperor himself and he has two options: launch his invasion at once, "which would cure everything by curing inaction," or " he must crush Captain Cut-Throat before another murder can be committed." So the Emperor gives Joseph Fouché, the Minister of Police, an impossible task: he has less than a week to ensnarl the cut-throat with his talent for Machiavellian maneuvering.


M. Fouché has a large, far-reaching network of agents and spies, which captured a foreign agent, named Alan Hepburn, who operated in France under the Lupinian nom de guerre of "Vicomte de Bergerac." He wants to use this British agent to trap a British agent and involves Hepburn secret wife, Madeleine, whom he deserted for unknown reason. But they're not the only ones send into the encampments by Fouché: Hepburn involved himself with another woman, Ida de Sainte-Elme, who's one of Fouché agents and helped to capture Hepburn and they're closely followed by a Prussian horse-rider – Lieutenant Schneider of the Hussars of Bercy. 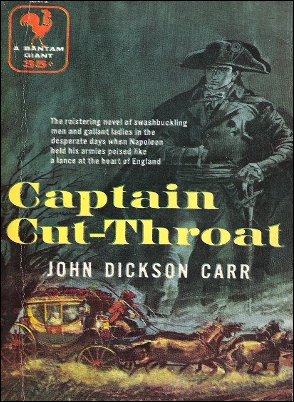 Admittedly, a good portion of the first half of the book is one or two paces slower than the rest of the story, because Carr takes the time to introduce the characters, explain their situations and giving the details about the "series of ghost-murders" of Napoleon's sentries. But after these opening chapters, the story becomes somewhat atypical for Carr. One of the most notable examples of this is how he treated the impossible crime element of the story, which does not take the center stage of the plot and is easily explained by Hepburn around the halfway mark of the book. I found this to be a minor mark against the book, but I can understand why it was done as Captain Cut-Throat is more a novel of adventure and intrigue than one of detection and ratiocination. And that may be a problem for even some of Carr's most loyal readers.


However, purely as a historical novel of romance, intrigue and adventure, Captain Cut-Throat allowed the cavalier attitude of its author to roam freely and let his swashbuckling, adventure-hungry spirit off the chain. This resulted in what is, arguably, Carr's best action scene: Hepburn's night-time flight through the field of balloons. A scene that would, by itself, be justification enough to make an expensive period film out of the book. It's simply that great!

Of course, even an unapologetic JDC-apologist, like myself, cannot deny all of this running around and adventuring did not came at the cost of the detection, which has some shaky reasoning and fair play, but these elements are still far stronger than your usual run-of-the-mill historical spy-thriller – because this is a Carr novel after all. And the final revelation of the omnipresent villain is perhaps one of the most original plays on the least-likely-suspect gambit. I actually figured out the identity of Captain Cut-Throat the first time I read the book, but (admittedly) arrived to that conclusion instinctively rather than deductively.


Captain Cut-Throat is not a perfect piece of fiction, but it's tremendous fun with an intriguing premise and plenty of excitement with a dusting of mystery and romance. On top of that, the first half has a good, if simplistic, impossible crime. So Carr really threw everything he had at the plot and the most impressive accomplishment is how he managed to simultaneously use elements of the spy-thriller, adventure story and an impossible crime tale, inside a historical narrative, without reducing the impact or effectiveness of any of them. Therefore, the book really should be better known within the ranks of readers of both Carr and historical mysteries.

In closing, I would like to wish the ghost of John Dickson Carr a grand 110th birthday. Long may he haunt us!
Geplaatst door TomCat on 11/29/2016