"Men may keep a sort of level of good, but no men has even been able to keep on one level of evil. That road goes down and down. The kind man drinks and turns cruel; the frank man kills and lies about it."
- Father Brown (G.K. Chesterton's "The Flying Stars," from The Innocence of Father Brown, 1911)

Bloodstone (2011) is the eleventh entry in Paul Doherty's "the Sorrowful Mysteries of Brother Athelstan," originally published as by "Paul Harding," which appeared after the series went dormant for nearly a decade, but the ever-prolific Doherty penned six more novels since he pulled his creation from literary limbo – all of them work towards The Great Revolt (2016). I thought this second period in the series seemed like a good place to get reacquainted with Brother Athelstan. 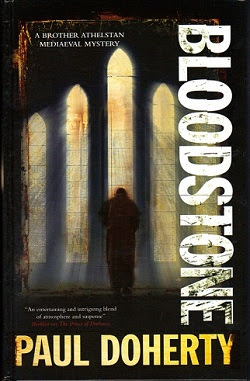 The story takes place during the dark December days of 1380 and opens on the eve of the Feast of St. Damasus I, which takes place during the second week of Advent. So you can chalk Bloodstone down as a Christmas-time mystery, but the spirit of festivities garbed itself in the robes of the proverbial specter at the feast.

Sir Robert Kilverby is comfortably ensconced "in his warm, snug chancery chamber," pine logs were crackling in the mantled hearth and the door bolted from the inside, but even the safe, fortified nature of the room was no security from dark thoughts clouding his mind. The rich merchant was in a lamentable mood: reflecting on the passing of his first wife and regretting his second marriage, which are merely domestic trifles compared to his past sins of a far more serious nature – a grave wrong that made him the custodian of a holy relic.

As a man of wealth, Sir Robert had financed "those depredations in France," which were part of a seemingly never-ending conflict, known now as the Hundred Years' War, but this made him "partly to blame for the theft of that sacred bloodstone." A precious, blood-red ruby, "The Passio Christi," which is said to have miraculously formed out of the blood and sweat of Jesus Christ when he was dying on the cross. The gemstone was the crown jewel of the Abbey of St. Calliste, near Poitiers in France, where it was taken by a notorious band of marauding soldiers.

The Wyvern Company has "a fearsome reputation" as "a deadly, hostile horde from the havens of hells." They were ruthless men of war who had shown "no respect for anything under the sun." During their glory days, these men were the scourge of the French countryside and took everything they desired, "be it a flagon of wine or some plump French wench," but even Holy Mother Church was not spared from their greedy claws – as they scaled the walls and plundered the Abbey of St. Calliste. One of their grand prizes was the sacred bloodstone, the Passio Christi. Officially, they claimed to have found the relic in an abandoned cart, but the crown disputed their claim and ordered the stone to be placed in trust with one its bankers, Sir Richard Kilverby. In exchange, the men of the Wyvern Company would receive a pension out of the coffers of the Royal Exchequer.

So that's how Sir Richard came to be the legal custodian of a stolen relic, but, as of late, he has been repentant about his old sins and bad decisions. The new French Sub-Prior at St. Fulcher, Richer, has warned him about the dangers the possession of the ruby posed to his immortal soul and similar warnings were written down in the Liber Passionis Christi – i.e. The Book of the Passion of Christ. Sir Richard has began making reparations and is determined to deliver the Passio Christie to St. Fulcher, after which he wants to go on a "pilgrimage of reparations" to Rome and Jerusalem, but "some stealthy night-shape" penetrated the secure chamber and delivered earthly revenge. As well as taking the stone from a triple-locked casket.

The death of Sir Richard brings Sir John Cranston, Coroner of London, to the scene of the crime and alongside him is his secretary, Brother Athelstan, who's a Dominican friar and parish priest of St. Erconwald's in Southwark. Athelstan is also the Holmes to Cranston's Watson and usually is the one who finds a path to the solution. One of the many problems facing the friar is having to figure out how poison was introduced into a securely locked and bolted room, which was found to be bare of any traces of toxin. Or how the assassin managed to take the Passio Christi from that same room.

However, this particular locked room was not as difficult to solve as may seem at first. I immediately figured out how the poisoning trick was pulled off, which was practically given away, but also because Doherty recycled this particular artifice from one of his novels from the early 1990s. Luckily, there were more plot-threads and this included one of Doherty's most ingenious locked room murders, but one that was surprisingly underused. It's a trick that should have been used as one of the main plot-threads.

Back at St. Fulcher's, a cowled figure, "cloaked all in black," is targeting the last remaining members of the Wyvern Company: one of them is cut down in the cemetery and another one is gutted along a quayside, but the third one perished in a blazing inferno inside a locked room. The trick for starting this fire was surprisingly clever and deserved more prominence, whether in this book or another, which has its only weakness that Athelstan and Cranston needed outside help to explain the technical nature of the trick. Namely that of an eccentric-looking man, Bartholomew Shoreditch, commonly known as a firedrake "for his skill, knowledge and expertise with all forms of fire," i.e. a pyromaniac with a license! So something fun could have been done with a character like that if this plot-thread had been better utilized.

I should also mention another sub-plot about a gifted painter and talented hangman, a local anchorite, who is haunted by "the ghost of a wicked woman he hanged." The explanation for these ghostly apparitions are, again, fairly easy, but this storyline provided the book with a couple of nicely written, atmospheric and even Carrian set pieces – which added to the overall readability of the book.

Plot-wise, Bloodstone does not rank as one Doherty's absolute bests, but the plot is competent enough to overlook some of its minor shortcomings and the story itself is engagingly written, which showed the author's background as a historian. I think the historical details and the revolt brewing in the background helped a lot in masking some of the plot's shortcomings. So, to cut a long story short, while I have read better from Doherty, I was certainly not left disappointed and kind of want to continue with this insurgence story-arc. But that's something for next year.
Geplaatst door TomCat on 11/20/2016