"I've never before seen anything on the stage that impressed me so deeply."
- Chief-Inspector Roderick Alleyn (Ngaio Marsh's Enter a Murderer, 1935)

Alan Melville was a consummate entertainer with a varied and wide-ranging résumé: playwright, lyricist, actor, producer and raconteur, but gained name recognition as one of Britain's first television personalities, which he did as host of A to Z and as a panelist on a host of popular programs – such as The Brains Trust and What's My Line? Sadly, these accomplishments overshadowed his short-lived career as a mystery novelist. 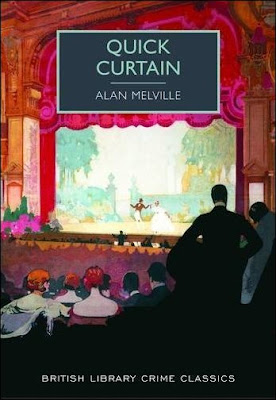 During "a short burst of energy when he was in his twenties," Melville produced a number of light-hearted and humorous detective novels, but they were soon forgotten about and passed into literary oblivion. Fortunately, the British Library noticed them and reprinted two of them: Quick Curtain (1934) and Death of Anton (1936). I reviewed the latter several months ago and the very amusing, circus-set detective story recalled the works of Leo Bruce and Edmund Crispin. I was also reminded of Caryl Brahms and S.J. Simon's satirical A Bullet in the Ballet (1937) and the equally fun Casino for Sale (1938).

So I ushered the other reprint on to the short-list of detective novels to be relieved from the Mount-to-be-Read and my previous read, Come to Paddington Fair (1997) by Derek Smith, provided me with an excuse to pick up Quick Curtain – as both are theatrical mysteries about the on-stage shooting of a thespian. But they both take a vastly different approach in storytelling and resolving what is, essentially, the same problem.

Quick Curtain opens, fittingly, with a playbill of Blue Music, a musical comedy operetta, which is billed as a Douglas B. Douglas production. Douglas is "a master of publicity," of the subtle variety, who had London rumoring about the show before it had even been written. There were even a number of women, members of the Brandon Baker Gallery Club, who had parked themselves, two days before the opening, outside the entrance of the Grosvenor Theatre. What they got as a reward for their dedication, besides stiff necks and sore backs, was being present for the unexpected swan song of their idol.

Brandon Baker's character, "Jack," is shot in Act Two by "Phillipo," played by Hilary Foster, but when the trigger is squeezed the lead actress, Miss Eve Turner ("Coletta"), responds in a way that reminds one of the attending critics of "the famous tragediennes" of the stage – not without reason. The weapon seems to have been loaded with a live round and the man who discharged the fatal shot immediately disappears from the stage, but is soon found in his dressing-room "hanging by the neck." It looks like an open-and-shut case.

There is, however, one person in attendance who sees the hand of an unknown murderer at work: Inspector Wilson of Scotland Yard. He was in the audience with his son, Derek, who is a reporter on the Gazette and they immediately take charge of the case, which is done without much regard for proper police procedure, but they are a fun and memorable pair of characters – with a large depository of banter between them. I also have to add them to the short list of father-and-son detective teams mentioned in blog-post about Clifford Orr's The Dartmouth Murders (1929). 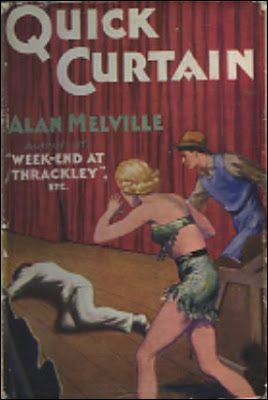 Inspector Wilson and Derek make an actual attempt at reconstructing and explaining the crime, but the comedic tone and some sparks of insanity prevail. However, these make for some fun scenes and sequences. I particularly loved the funeral scene! Several members of the Gallery Club obtained admission to the church and they "stormed the pews like a mass attack going over the top in the trenches," which had its objective the securing of a number of mementos and resulted in them ripping "the church bare of its lilies, carnations and lilac inside a couple of minutes." They even removed chunks from the prayer-books and hymnals strewn on the pews. I think the Brandon Baker Gallery Club is one of the earliest depictions in pop-culture of the creature known as the rabid fangirl.

Derek also contributes some fun to the case by following a potential lead to Crailes, a village in Buckinghamshire, which he does under an alias, "J. Hopkinson," but this will land him a spot of trouble after dispatching a chain of cryptically worded telegrams to his father – eventually arousing suspicion in the local postmistress, Miss Ethel Prune. After the body of a woman is found in Craile Woods, Derek is taken into custody when the local constable learns of the odd telegrams and alias.

So, as a comedic spoof of the detective story, the book is a roaring success, but, purely as a mystery, the plot got the short end of the stick.

Sure, the false solution by Inspector Wilson was not exactly a jaw-dropper, but perfectly acceptable, which even had a fairly clever, if simple, use for the stage in relation to the supposed direction of the shot. But then the letters were delivered. Letters that poked the detective story in the eye, punched it in the nose and buried a knee in its groin. Dorothy L. Sayers was correct when she said Melville blasted "the solemn structure of the detective novel sky-high" and this approach did not exactly do any miracles for the concept of fair-play either.

Quick Curtain is really a light-comedy that uses the detective story as a vehicle, but the book is still a very fun and amusing read. So, if you don't mind the author poking a finger between your ribs, the book comes very much recommended to even the staunchest purist. However, if you want to read something amusing with a more traditional plot-structure by Melville, I recommend you pick up Death of Anton.
Geplaatst door TomCat on 11/06/2016