"I am an old-fashioned villain."


"Old-fashioned villains are always killed in the end."
- Casino for Sale (1938)

Death is no laughing matter, especially when it manifests itself in the guise of a callous murderer, but the mystery genre has a long and storied history of making a laughing stock out of the homicidal tendencies of the scythe wielding death-dealer – goaded by the ghouls who relish these abdominal stories. And yes, we're all guilty of this one. After all, who can honestly say they read Leo Bruce's Case for Three Detectives (1936) with a straight face or were not reduced to soft chuckles after strangling a laugh while flipping through the pages of Kelley Roos' The Frightened Stiff (1942)?
Caryl Brahms and S.J. Simon, co-conspirators in a series of comical mysteries and historical farces, were two of the malefactors responsible for turning the cloaked embodiment of death into a figure of fun. These literary equivalents of Bonnie and Clyde openly confessed that they intended to keep Londoners laughing during the Blitz and schemed their risible narratives while cremating cigarettes, draining cups of tea and emitting frequent shrieks of laughter – which is why I always refer to them as partners in stitches. Well, if Bill Pronzini is ever going to compile a Gun-in-Cheek sequel, dedicated to awful puns and cringing witticism from hack reviewers like myself, I have secured a spot in it with that one! 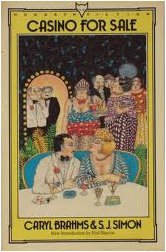 Their first collaborative achievement as a criminal enterprise came with the publication of A Bullet in the Ballet (1937), in which Inspector Adam Quill and the members of Vladimir Stroganoff's absurd and uproarious ballet company made their first on-stage appearance – as they tangoed with an assassin who insists on killing performers dancing the role of Petrouchka during shows with hundreds in attendance as potential eye-witnesses. The jocular story telling gelled perfectly with a well-constructed plot, but it was the impresario Stroganoff who usurped the spotlights. A genuinely droll character who gave actes de présence in numerous of their satirical mysteries as well as non-criminal comedies.
Casino for Sale (1938) opens with the beleaguered Stroganoff being bamboozled into purchasing a small, dilapidated casino within the vicinity of a recently erected, modish casino and on top of that his newly acquired gambling den turns out to be cesspool of crime. Blackmailers and confidence tricksters have a run of the place, but the indefatigably impresario takes on the competition by inveigling the discerning public into the run-down gaming house with his world famous and celebrated ballet company. But nothing runs smoothly and when Pavlo Citrolo, an eminent ballet critic who moonlights as a blackmailer, refused to give a good notice the promoter recognizes that the situation calls for swift and immediate action by doing what everyone in his position would've done – spiking the critics drink with a sleeping draught and rushing-off to write a laudatory review in his name after safely locking the snoring blackguard up in his own office.
So problem solved? Casino Stroganoff receives a commendatory notice from a highly regarded patron of the stage and the decrepit casino becomes a success after all. Well, not quite. 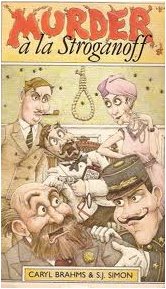 When he returned to unlock his office, a speech prepared to logically account for his groggy state and the locked environment, in which Pavlo Citrolo found himself when he woke up from the drug-induced stupor, he finds the strangled remains of the man in what can only be described as a sleuth's nightmare. There was a noose dangling from the ceiling and a gun near the body; there was a bullet hole in the wall and an untouched glass of milk next to a bottle labeled poison; a half-smoked cigar on the mantel piece and the safe door was swung wide open – and guess who the local Inspector Clouseau incarcerated for the murder after his first inspection of the crime-scene? Exactly! Luckily, for Stroganoff, he had the blind foresight to dispatch an invitation to Adam Quill, now retired from the force and making a living as a private enquiry agent, to waste his vacation at the casino – which now has turned into a busman's holiday.
Casino for Sale is a rollicking cavalcade of crime, in which the bantering characters and effervescent dialogue decide on who has the brightest sparkle by holding a repartee duel – making this is a fast-paced and breezy story. Unfortunately, as a detective story, the plot missed a beat or two by trivializing the circumstances in which the murder was discovered. The clue filled murder room was fairly quickly accounted for as one of Stroganoff's artistic fits (hoping to obscure the murder as a suicide and abscond any personal responsibility for drugging him) and the banality of the locked room trick was unsatisfactory to say the least. Admittedly, the latter advanced the plot and provided a few chuckles, but I think littering the place with a dozen spare keys would've worked just as well and been less of a disappointment.
Nevertheless, these cosmetic anomalies take very little away from the overall quality of the book as it remains a very amusing romp and Adam Quill is a pleasantly assiduous detective – diligently picking up clues, interrogating witnesses and pursuing suspects. It's just that I feel that this could've been a minor classic if Quill also had to explain away the murderous instruments and intriguing clues, one after another, before uncovering the culprit's identity – akin to Carter Dickson's Death in Five Boxes (1938).
If you'd compare this book to a casino slot machine, it only missed one of the symbols needed to complete the winning combination that would've hit the jackpot. Oh well, at least playing the game was plenty of fun.
Bibliography of the Adam Quill and Vladimir Stroganoff series:
A Bullet in the Ballet (1937)
Casino for Sale a.k.a. Murder a la Stroganoff (1938)
Envoy on Excursion (1940)
Six Curtains for Stroganova a.k.a. Six Curtains for Natasha (1945; non-mystery)
Stroganov and Company (1980; a short story collection)
Geplaatst door TomCat on 8/13/2011