An "F" for Felony

"It was as fantastic as Alice's sojourn in Wonderland – as improbable as her tea party with the Mad Hatter!"
- Hilary Fenton (Murder at Cambridge, 1933)

The collaborative, literary venture, operating during one of the most prosperous eras of the detective story under a number of different pennames, such as Patrick Quentin and Jonathan Stagge, accumulated a considerable hoard of praise on here – and each and every laudatory syllable was well deserved. Unfortunately, they didn't permit me to compose another meritorious song of praise, in which I would've lyrically waxed about their skillful handiwork at knitting an intricately patterned wire mesh from a ball of plot threads and their knack for gauging the intelligence of their readers and act on it to cleverly lead them up the garden path. But none of these talents were on display in Murder at Cambridge (1933). 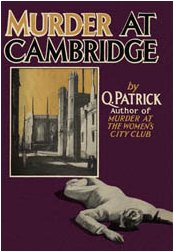 When I invaded the opening chapters of Murder at Cambridge, published under the Q. Patrick byline, I was astonished to find myself at the heart of what appeared to be John Dickson Carr territory. Naturally, the style of story telling diverged from that of the maestro himself, but the characters and events suggested a conscience pastiche – which I would've assumed to be the case were it not for the fact that John Dickson Carr was still an up-and-coming writer himself at the time of publication.
This felonious yarn of double murder, sudden romance and buried family skeletons, clawing away a ton of dirt to their freedom, set at a quiet, British college is narrated by Hilary Fenton, son of a well-to-do, notable jurist from the States, who studies abroad and leads the habitué lifestyle of an undergraduate – which is turned on its head when he catches a glimpse of a woman in the lecture hall and promptly falls in love. The name of the woman, referred to by the love struck chronicler as The Profile, turns out to be Camilla Lathrop, a daughter from a wealthy family, who trots the campus grounds with her fair share of secrets – one of them being the true nature of her relationship with Julius Baumann, a South African of Dutch extraction, who coincidently turns up at Fenton's doorstep with a rummy request.
Baumann wants Fenton to countersign a document as a validation of his signature and entrusts him with an envelope, which he has to drop off in a mailbox, in case anything happens to him – dire words pregnant with prophesizing qualities. Because one night, during a roaring thunderstorm, doubling as an atmospheric backdrop for a group of students telling horror stories and as a cover to drown out the noise of a gunshot, someone surreptitiously slipped into Baumann's room and shot him in the face.
Well, there you have it: nearly all the ingredients required to formulate a John Dickson Carr novel. The male lead of the story is a youthful, American hero who is swooned off his feet by an attractive, British girl and they're subsequently plunged heads first in a shady, dangerous affair – cumulating in a murder committed while everyone was breathlessly listening to ghost stories with occasional interuptions by the crackling thunder. The only components needed to have completed this concoction was a killer striking in a hermitically sealed environment and the hidden presence of ingenious, double-edged clues.
The lack of a proper, meticulously conceived locked room trick is a grave offence, but one that would've received some leniency if there had been even a single, semi-clever clue to look at – instead of randomly selecting a culprit who snugly fitted the role of least likely suspect and even that bolt from the blue was deflected by the front cover of my edition! Yes, the second-rate, poor excuse for a hack illustrated the front cover of the Popular Library edition with a depiction of the murderer in the act of poisoning the cup of the third, intended victim – hence the reason for picking a different cover to embellish this post with.
Thankfully, this artistic debauchery didn't spoil a better detective story, but I'd still like to show this paint-waster, and others of his kind, the error of his ways in an interactive college course I entitled, The Experiments of Dr. Mengele: An Reenactment. Guess who will be wielding a set of syringes filled with a brightly, multi-colored liquids? Oh, c'mon, don't pretend you failed to notice the tell-tale signs of my crumbling sanity and ever weakening grip on every-day reality.
Anyway, the only redeeming qualities this book possesses is the Carrian flavor that lingers through-out the book, the protagonist who tells an excellent story and the delineation of college life in the early 1930s – but as a clever, fair-play detective story this one just might constitute as the biggest misfire of the year.
This is not at all what I expected from the same, straight "A"-minds who crafted the deviously, twisted and multi-layered plots that adorn the pages of Death and the Maiden (1939) and Black Widow (1952) – and I have no other choice than to mark this one down with a big red "F". I hope you do better next time, guys!
On a final note, I once again have to apologize for the fact that a bad read translated itself into another shoddily written review. When a book turns out to be as disappointing as this one, it's an exhausting wrestling match to gather the right words, string them together to form coherent sentences and hoping that it miraculously resembles a half decent review. Hopefully, I will do better in my next blog entry, which, by the way, will focus on one of John Rhode's most praised books. Stay tuned!
All the books I reviewed by these writers:
Murder at Cambridge (1933)
Puzzle for Players (1938)
Puzzle for Puppets (1944)
Death and the Maiden (1939)
Black Widow (1952)
Geplaatst door TomCat on 8/07/2011