"Cannibals," I added, "must be very, very queer people."
"Especially," Lynch said peevishly, "cannibals who inexplicably lose their appetite on a dark night on a deserted mountain peak when the job’s four fifths done. Queer indeed!"
- Murder in Fiji (1936)

John W. Vandercook (1902-1963) was a foreign correspondent and globetrotter who explored the forgotten nooks and unexamined niches of the world. These voyages extraordinaire were made when the globe was still dotted with blank spots, Terra Incognito, which resulted in paddling the swamps of New Guinea in a native dugout, journeying over the uncharted waters of unexplored rivers on Malaita Island and cutting through the African bushes – resulting in several authoritative books on anthropology and a exposition of his souvenirs at the Brooklyn museum.
But he also poured these experiences, as a cosmopolitan adventurer, into writing four detective novels, penned between 1933 and 1959, in which he dispatches Bertram Lynch, a special agent in the service of the League of Nations, and history professor/narrator Robert Deane on dangerous assignments to exotic locations – where death assumes a deceptive air of passivity as it feigns to be languidly snoozing in the coolness of the shadows. Reputedly, these colorful backdrops provide the reader with a sense of danger and perilous situations for the heroes usually missing from detective stories set in the concrete jungle of Ellery Queen's New York City or the sleepy countryside villages like Miss Marple's St. Mary Mead, but the book I just read was a traditionally plotted mystery, situated in an unusual location for a whodunit, instead of a full-blown hybrid – which was a pleasant surprise. 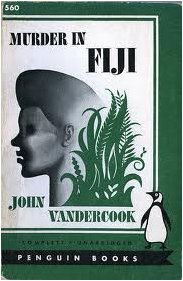 In Murder in Fiji (1936), Bertram Lynch and Robert Deane are packed-off to the Fiji Islands where a trail of mutilated bodies has rock the islands. Violent crimes are uncommon on the now harmonious South Pacific slice of Britannia, but the mutilations has the colonials worried that the natives are returning to the cannibalistic customs of the previous generations – and the local news rag is crying for punitive measures against the native inhabitants. A dangerous sentiment that could become a popular one when the fourth victim turns out to be a white man.
Enter Bertram Lynch, whose assigned to safeguard the good relations between the natives and colonials by dropping off the perpetrator at the gallows and a preliminary investigation of the latest victim convinces the special agent that he's, in fact, dealing with a savage killer, however, not one that is indigenous to those islands. Vandercook's vivacious writing sketches not only a memorable imagery of the regions vista, but also portrays the natives as actual human beings who are generally nice and sympathetic people – which is a continuation of a tradition that began with Earl Derr Biggers and honored by Clyde Clason.
Well, we have an inexplicable succession of detestable mutilation killings, suggestive of a resurgence of cannibalistic rituals among the native inhabitants of the land, set against the backdrop of an exotic location dotted with engaging characters, but does the plot hold up as a fair-play detective story? Yes, I think it does. The clues were more than fairly strewn throughout the story, which made the revelation of the manslayer's identity feel like an inevitability, with the most perceptible one tucked away near the end of the book – when Lynch stages a psychological experiment by staging an ancient ritual during which a local chief is poisoned under seemingly impossible circumstances. Don't expect too much from the solution of that little side puzzle, though, as it was clearly meant as a throw-away clue for readers who hadn't stumbled to the truth yet. Great scene, though!
This book is not a monumental landmark in the genre, but otherwise an evocatively written, competently plotted mystery with a pair of amiable, non-intrusive or annoying detectives, who actually have a nice Sherlock Holmes and Dr. Watson vibe going for themselves, chasing an individual who's a truly nasty piece of work – and one with the worst streak of bad luck you've ever seen in a fictional killer from the golden era. Yup. This murderer isn't aided by staggering feats of almost supernatural luck and a series of perfectly timed coincidences, which makes me like this book even more and enough to warrant a further exploration of this particular authors work.
So expect more reviews from the other books in this series to surface on this blog in the hopefully not so distant future, but for the next few blog entries I want to look at some other impossible crime stories and locked room mysteries.
The Bertram Lynch and Robert Deane series:
Murder in Trinidad (1933)
Murder in Fiji (1936)
Murder in Haiti (1956)
Murder in New Guinea (1959)
Geplaatst door TomCat on 8/19/2011