Serpents in the Garden

"Stories rife with words inane,
Tears in hand, all shed in pain;
These, the author holds—a fool,
Who else can make their thread unspool?"
- Cao Xueqin

Recently, our resident tour guide in the world of shin honkaku, Ho-Ling, posted a review of Akechi Kogorou tai Kindaichi Kousuke (Akechi Kogorou vs. Kindaichi Kousuke, 2002) by Taku Ashibe, which is a collection of short stories from his Exhibition of Great Detectives series – a flattering "showcase of pastiches starring famous detectives from both East and West." Ho-Ling's enticing review was a helpful reminder that, not only, is there an English translation available of one of Ashibe's detective novels, but also that the book in question was residing on my TBR-pile. So I felt compelled to finally take a crack at this very strange and peculiar locked room mystery. Yes, I know, but what did you expect from me? 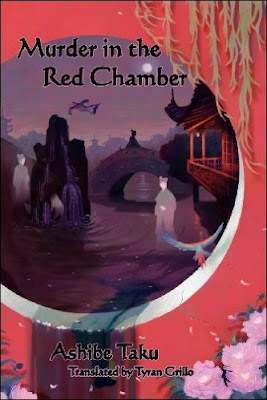 Ashibe is an award-winning novelist with close to forty books to his name, "spanning the gamut from horror to courtroom dramas," but seems to have a fondness for "highly detailed pastiches." And his sole work (thus far) appearing in English can definitely be described as a meticulously constructed homage.

Koromu no satsujin (Murder in the Red Chamber, 2004) takes place in the world Cao Xueqin's Dream of the Red Chamber (1791), widely regarded as one of the four classic novels in Chinese literature, which received a thorough translation under the title The Story of the Stone and consists of more than two thousand pages – spread out over five volumes. I've not read this 18th century novel of manners and therefore every single reference flew pass me unnoticed, but Murder in the Red Chamber can perfectly be read as a standalone work. Some might even be inspired to pick up the book that inspired this imaginative, blood-soaked take-off.

There is, however, one drawback to the fact that the fundament of the plot stands on the premise of a two-hundred year old book of more than two thousand pages, which is that it comes with a large, sprawling cast of characters. Only recently, "JJ," mentioned in his review of Jan Ekström's Ättestupan (Deadly Reunion, 1975) how he found the genealogy of the central family to be confusing, but the family tree from that book is dwarfed by the one printed in this one. It comprises of roughly thirty names, dead and alive, spanning several generations and the dramatis personae lists thirty-four active characters! Even Michael Innes' Hamlet, Revenge! (1937) has not as big a cast as that.

So this makes the book a bit of an ordeal to properly review, which is why the primary focus of this blog-post is on the plot and its profusion of impossible crime material. It's a farrago of impossibilities comparable to Paul Halter's Les sept merveilles du crime (The Seven Wonders of Crime, 1997), but Ashibe, arguably, wrote a better story around those half a dozen locked room situations.

Murder in the Red Chamber opens with the return of Jia Yuan-chun to her ancestral home. She was once a maid of the Imperial Palace, but has since risen to the position of Imperial Consort and Jia clan erected a garden compound in her honor – a walled paradise christened Prospect Garden. The book also includes a beautifully illustrated and numbered map of Prospect Garden, which shows all of the locations within its walls. It's very similar to the maps found in the Judge Dee novels by Robert van Gulik.

Anyway, the first of many tragedies also take place within those walls: one of the maidens of Prospect Garden, Ying-chun, who was seen across a lake, resting on a stool beneath the arched roof of a pavilion, when "a pair of arms sprouted from the darkness" – grasping her by the throat and eventually dragging the body "into the lifeless void behind her." The body of water between this horrifying scene and the onlookers on the opposite bank of the lake prevented immediate actions, but when everyone recovers from the first shock and comb the garden they find the body of Ying-chun in a stagnant pond not far from the lake. However, the shadowy killer seems to have escaped and "vanished from a heavily guarded garden." And this would not be the only inexplicable event haunting the characters of this story.

One of the woman from Jia clan, Wang Xi-feng, disappears from a locked and watched room, in which "a looming shadow" was flitting across the sliding door, but when the room was opened the only occupant was the chief maid, Patience – who was tightly bound and clasping the key of the room. But this is only the first act of a three-part (miracle) trick: outside they see "a swath of silk floating nearly seventy feet up in the air." It's a tailored garment that's recognized as Wang Xi-feng's robe and the body that was supposed to be inside this piece of clothing miraculously reappears inside "a courtyard locked from all sides."

Note that these are still only half of all the seemingly impossible situations in the story: the body of a third woman, Shi Xiang-yun, inexplicably appeared in a bed of petals and fourth, named Caltrop, vanished mere seconds after being seen inside a locked room and her body was later found on an outside field. Lastly, an apparition manifests itself by the lake and tries to drag a woman into the water, but this attempt is thwarted and the manifestation sinks back into the underworld.

Well, that's a hefty parcel of miracles and naturally not every single one of them is a classic example of the form: the impossibilities at the lake, the first and last one, where rather theatrical in nature and wonder if they would actually work or fool anyone, but they're good for what they are – especially the first one. The disappearance of Wang Xi-feng and the intruding shadow from the locked room was pretty routine, as was her reappearance inside the locked courtyard, but loved the bit about her ghostly garment floating in the air. It was wonderfully silly and a bit Scooby Doo-ish. I found the answer as to how Caltrop vanished from her locked and watched room a bit sketchy, but the explanation for how a body suddenly appeared in a bed of flowers was as clever as it was imaginative. A similar kind of trick was used in The Undying Butterflies (1997), from The Kindaichi Case Files, to create an alibi-trick and the idea might have been cribbed from that story. Regardless, Ashibe added some noticeable color to the idea. I loved it!

All of these apparent impossibilities are directly connected to the family history of the characters, inter-connecting relationships, past sins and the cultural mores of the time, which form an intricate maze of illusions and treachery – which is navigated by Lai Shang-Rong. A bright government official whose impressive casebook lifted him from the rank of lowly prefect to full-fledged Inspector of the Ministry of Justice. He's enjoyable and energetic investigator who sees mere trickery were others are blinded by the apparent supernatural, but his final conclusion has a blemish or two.

The first one is that the clueing is rather sparse and the second one is the revelation of what's behind this extraordinary chain of events, which is rather anticlimactic as it does not show any kind of grand design one expects from such a elaborate, twisted and complicated plot. However, this is partially made up when an intervening force is revealed to have meddled in the murders and the motive for the interference is what makes The Murder in the Red Chamber a genuine original piece of crime-fiction.

So, The Murder in the Red Chamber is far from being a classic in its own right, but the large scope of the story, the maze-like nature of the plot, the plethora of impossible situations and the final explanation definitely makes the book worth a shot. In particular if you're a fan of locked room conundrums, historical mysteries, foreign crime novels, pastiches or simply loved the source material that Ashibe drew upon for this book.

A note for the curious: some time ago, I took an enthusiastic shot at reading one of The Four Great Classical Novels of Chinese Literature, A Journey to the West (c. 1592) by Wu Cheng'en, which consists of two-thousand pages and the faithful, but terse, translation covered four volumes. Actually, the first volume, detailing Sun Wukong's rebellion against Heaven, was very readable, but got burned out in the second volume. It's a great and fantastic epic, but not the kind of literature that lends itself for binge reading. However, I still want to return to the third and fourth volume, because I still remember where I ended (the kidnapping of Tang Sanzang).

So far another one of my overlong, rambling reviews. I'll try and make an effort to ease off on the impossible crimes, but again, no promises.
Geplaatst door TomCat on 12/01/2016