"The cheaper the crook, the gaudier the patter."
- Sam Spade (Dashiell Hammett's The Maltese Falcon, 1929)

In my previous blog-post, I reviewed The Cell Murder Mystery (1931) by Donald Bayne Hobart, which was reissued by Coachwhip, alongside The Clue of the Leather Noose (1929), as a twofer volume – simply titled Two Mysteries (2014). Why not, I thought, polish off this double edition in one go and have it done with. Or else, it would be sitting, unfinished, on my TBR-pile for weeks or perhaps even months. So here we are again! 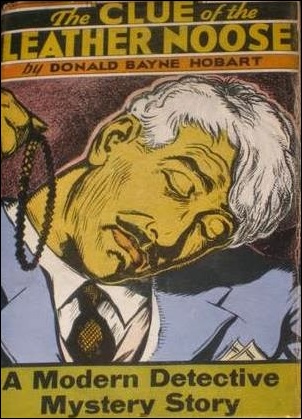 One of the most notable aspects of the book is the historical and scenic backdrop of the crime-scene, which seems to be the reportedly famous Boardwalk of Ocean City, New Jersey.

There are only two, very minor, references that give the location away: one of them is a rather obvious, throw-away line mentioning the place by name ("Ocean City looked like a fairyland...") and the other was a reminder to one of the suspects that New Jersey electrocutes its condemned murderers, but both of them were made halfway through the book – suggesting that the author actually tried not to make the location of his novel too obvious. However, Hobart should have known that mystery readers are a skulk of curious and persistent foxes!

A second point of historical interest was the immediate scene of the crime: a rolling chair parked on a public spot of the Boardwalk. A rolling chair is, usually, a (covered) two-seat cart that can be hired by vacationers to be rolled across the Boardwalk by a chair-pusher. During the late 1800s and early twentieth century, they were a sign of luxury, but, nowadays, they're only a novelty attraction.

The Clue of the Leather Noose begins with the discovery of a rolling chair, "parked close to the outer rail and facing the sea," which turned out to contain the body of a retired and unscrupulous stage producer, Mr. Watson Gregg, who had been evidently murdered – strangled with "a peculiar cord of saffron leather." Before the murder was discovered, onlookers, one of them a policeman, saw a number of people near the rolling chair: one of them a tall gentleman, "who appeared to be having a very amusing conversation with Gregg," but there were also two women who stopped at the chair. Both of them heavily veiled (of course!). This was preceded by "a slender, golden-haired girl" getting out of the chair and "hurrying off the Boardwalk crying."

She was recognized by Larry Benson as his love-interest, Lannon Gorden, which he neglects to tell to Police Captain Jerry Blake and his chief aid, Detective Dan Flannigan, but there were also other characters abound on the Boardwalk. Gregg's physician, Dr. Fulda of New York, who found the body and called upon Benson for help. They're quickly joined by a Giovanni Danton and the doctor notes that "there seemed to be a tense antipathy between these two men."

There is, however, one important witness missing from the scene of the crime: John Hagen, the chair-pusher. 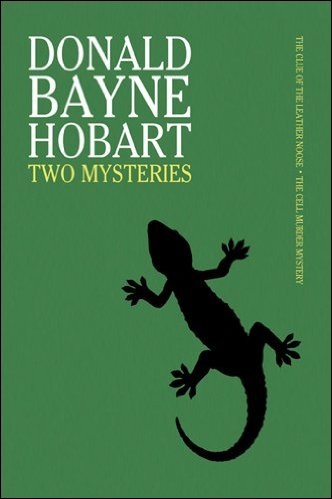 So, there's more than enough interesting material for a potential interesting detective story, but, as I observed in my previous blog-post, Hobart was not one of the genre's greatest plotters. As a pulp-writer, he knew how to spin a yarn and rapidly move a story from one event or revelation into another, which makes for some pleasantly paced storytelling, but his plots are not exactly sterling material – which never seem to be able to fully deliver on their premise or play fair with the reader. Some key points and evidence were unfairly withheld from the reader by Captain Blake.

Nevertheless, Hobart is not an unpleasant writer and keeps you moving along with the story that involves an "evil-faced blackmailer," a Japanese servant, a dotty aunt who celebrated the death with a dinner party, alongside a handful of additional characters, as well as a number of (attempted) murders. But, once again, you should not expect all of this to result in a rug-puller of a final chapter, because Hobart was not that kind of a crime writer.

The treatment of the murderer and motive was, somewhat, interesting, but hardly enough to make for a fully satisfying mystery novel.

So, that's two lukewarm reviews in a row, however, I have something that might end this blog-post on a semi-interesting note. As you probably guessed, I found the boardwalk setting and the rolling chair to be (historically) interesting, which made me wonder what some of Hobart's god-tier contemporaries would've done with such a premise. I actually began to imagine how my favorite mystery writer, John Dickson Carr, would've tackled this problem and actually was able to come up with a full-fledged, Carrian-styled explanation for the strangling death of Watson Gregg. I also turned it into an impossible crime, but used (nearly) all of the elements that were already in the story.

Hey, it's Christmas is almost upon us. So why not work my magic and conjure up a little miracle for you all to enjoy?

If Carr had been the author of The Clue of the Leather Noose, the doctor would have been revealed as the murderer and he would have approached the rolling chair twice. The first time as the unknown gentleman, who was seen having a very amusing conversation with the victim, which was an animated talk because Fulda was explaining why he was on the Boardwalk in disguise – probably spinning a tale about seeing a married woman (or something along those lines). He offered a very amused Gregg a swig from a his pocket flask, which was, of course, doctored with a sleeping draught.

The point of the sleeping draught is that he would not be knocked out immediately, because the doctor had to ditch his disguise for the second and final phase of his murderous scheme. And this is where his plans begin to unravel. Unknown to the doctor, Gregg is seen (by the police officer) being approached by the two previously mentioned women and every time there are signs of life coming from the strolling chair. But, eventually, the effects of the doctored drink kicks in and Gregg falls into a deep, deep sleep.

When the doctor returns, he is seen leaning into the vehicle, "as he seemed to speak to the occupant," but he actually put the titular noose around Gregg's throat and drew it so tight "that it was deeply embedded in his flesh" - which is an action that only takes a couple of seconds. So, while an unconscious Gregg is strangled to death by a tightly pulled leather noose, the doctor pretends he found an already dead body.

Any twitches or final spasms of the body are easily obscured as "it was growing dark" and the wicker and glass sides, as well as the heavy top, placed the interior of the rolling chair in a shadow. So by the time an official homicide detective arrived, Gregg would have been slowly strangled to death. The book-title also gets an actual meaning with this method. Anyway...

Unfortunately, the doctor can't shovel the blame on the shoulders of the mysterious, and non-existent, gentleman he created. And the patrolling policeman is baffled, because how could someone have taken several minutes to strange a man right under his nose without being seen? It seems completely impossible! I know, I know, it would have made more sense, as well as having been easier, if the doctor had simply poisoned Gregg, but where would the fun have been in that?

Well, I hope you enjoyed this little re-imagining of the plot and I'll try to pick something better for the next review. But, for now, I wish you all a Merry Christmas and hope to see you all back next week!
Geplaatst door TomCat on 12/24/2016