"You can't evade ghosts in any case, and it looks as if they're going to play a big part in this mystery. The air here is full of them."
- Anthony "Algernon" Vereker (Robin Forsythe's The Spirit Murder Mystery, 1936)

Back in June(-ish) of 2015, the Dean Street Press and Curt Evans embarked on the arduous task of salvaging the legacy of the criminally neglected E.R. Punshon, once a giant from the genre's Golden Era, who wrote thirty-five police novels about Bobby Owen – a once humble constable who climbed to the rank of Commander of Scotland Yard. Over the course of a year and a half, this collaboration brought the entire Bobby Owen-series back into print and these brand new editions were introduced by Evans, which also offered glimpses at the life and work of Punshon's colleagues. 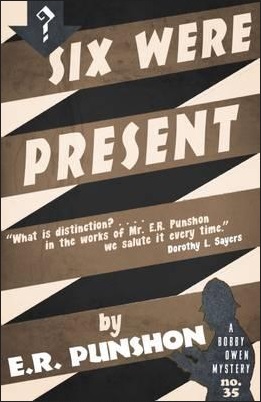 On January 2, 2017, the Dean Street Press is going to complete their reissue program of the entire series and comprises of the last ten novels Punshon wrote during the last years of his life. A period that covers the years between 1949 and 1956. Interestingly, this last batch of Punshon's "contain lots of extra goodies," such as short stories and an entire script of a never before published BBC radio-play, but also a newly written and slightly depressing introduction.

Under the title "Detective Stories, the Detection Club and Death: The Final Years of E.R. Punshon," Evans describes how "time had wrought cruel changes" on the members of the London-based Detection Club after the long interval of the war years. John Dickson Carr noted how everyone looked decidedly "greyer and more worn," but, by that time, eight of the original club members had already passed away and the relentless march of time would continue to thin their ranks – eventually taking Punshon in the mid-1950s. But the introduction also contains such snippets of information about his scrap with Anthony Berkeley, one of the "crankiest and most cantankerous," or how Christopher Bush allowed him recuperating from an operation at his home.

However, the bits and pieces on the final days of some of our favorite mystery writers are overwhelmingly depressing. Such as Sayers' passing, who was found a week before Christmas, at the foot of her stairs, "surrounded by bereaved cats."

Only a few months before her death, Sayers received a copy from Punshon's widow of his last published detective novel, Six Were Present (1956), which Evans described as "charmingly introspective," since she always appreciated her husband's books – famously asking "what is distinction?" and then pointing to a stack Bobby Owen mysteries. One distinction that's undeniable is the amazing consistency in the quality of his plots and writing. Six Were Present was written by a man in his eighties and who was probably already on Death's doorstep, but there's hardly any wear and easily one of my favorite Owen novels so far.

You see, Six Were Present is Punshon's take on the Carr-Talbot School of (Impossible) Crime-Fiction. So, yes, the book sort of catered to my personal taste.
Six Were Present is the thirty-fifth and final entry in the Bobby Owen-series, which saw him rise to the rank of Commander, but in his last recorded case he acts in an unofficial capacity in what is, essentially, a family affair – as a message from his cousin brings him back to the place of his childhood. 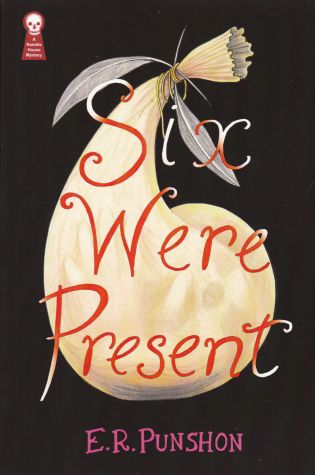 Bobby has taken leave from Scotland Yard and took his wife, Olive, for a motoring tour of the English countryside, which brought him to a bewildering standstill at the remnant background decor of his childhood days. However, as bewildering as the changed landscape is the household he finds: his cousin, Myra, is married to Val Outers, a retired Colonial Officer from South Africa, who is a specialist in African folklore and the dubious owner of a genuine Witch-doctor's medicine bag – which is said to contain a moldering dead man's hand and a hand drawn map of an unclaimed uranium field. Sadly, Outer's fascination for "the Unknown Powers the Africans believe in" may have caused the death of his twin sons. Myra and their daughter, Rosamund, always suspected Val of having ordered the boys to spy on a secret initiation rite. And when they were found out by the Natives, they were sacrificed to "The Dark Ones."

So that kind of baggage might make family dinners around Christmastime a bit tense, but now a psychic medium, Teddy Peek, became a regular visitor to the household. And in the background, Rosamund as three admirers moving around: a guy known as BB, Ludo Manners and a hunchback, named Dewey James, who lives with his invalid, but nimble, mother.

I think this cast-of-characters, background props and premise show Punshon's imagination was unaffected by old-age, but the storytelling, however, was affected. There's about of fuzziness about the details and the best example of this is the haunting memory of the twins, which hang as a pair of silent ghosts over the plot, but their names are never mentioned. They're always referred to as "the boys." The strongest aspect of the plot is the impossible murder and the plot-threads that were woven around it were not as firmly grasped as in previous books. Some of them appear to be nothing more than window dressing and disappeared (unresolved) into the background (e.g. the African seen by the side of the road). However, the murder plot is a wonderful take on the impossible stabbing during a séance inside a locked (tower) room.

Bobby is informed by Mr. Nixon, who's not a crook, but the West Midshire Chief Constable, about the murder of Val Outers. During a sitting in the Tower Room of the estate, Val was violently stabbed and the weapon vanished from locked and watched room. The room was pitch-black and the door were both locked bolted, while the windows were heavily curtained. Everyone was sitting around a round table. And in these conditions someone struck a deadly knife-blow, which killed instantly. But how did the knife manage to vanish from the room? And how did the killer manage to strike such a precise and powerful blow?

Well, I actually (brag, brag) managed to solve the impossible angle very quickly and this is another case, when you know how it was done, you know who has done, because the method fitted this character like a glove. After that, you can easly guess why it was done. Or roughly guess. However, the killer and motive were absolute grand, which fitted the method very well. One that hinges on the Chestertonian paradox of "when is a knife not a knife?" So, perhaps not a stone-cold classic locked room mystery, but overall, a very competent and spirited effort for the annals of the impossible crime story. For someone like me, that's not a bad way to bow out of this world as a mystery novelist. Yes, I'm biased in favor of authors who made a genuine effort at writing a good locked room. It makes you sort of family.

So, all in all, Six Were Present is a wonderfully lucid mystery novel, with flashes of originality, from a writer who was in his eighties and published his first novel in 1907. Some of Punshon's colleagues have bowed out on less gracious terms. Agatha Christie's muddled Postern of Fate (1974) stood in stark contrast to the work that garnering her the reputation as the Queen of Crime. Luckily, she had prepared Curtain (1975) and Sleeping Murder (1976) well ahead to cover up that abortion of a novel. Speaking of abortions, the reputation of Carr's sad swan-song, The Hungry Goblin (1972), has always prevented it from being reprinted and turned it into one of his rarest novels. Edmund Crispin's The Glimpses of the Moon (1977) was, at best, an unnecessary afterthought to an otherwise excellent series.

Well, you get the idea. Six Were Present ended the series on a high-note and that was not always the case for even the best of the Golden Agers. And as a fan of the series, locked rooms and Carrian plot-devices, I would even place the book among my personal favorites in the series. So perhaps not recommended as a starting point in the series, but one you must read once you have become a fan. It gives a nice sense of closure. Luckily, I still have about twenty of them left on the TBR-pile and at least one other is a locked room mystery! So, I guess my next stop in the series will be Everybody Always Tells (1950).

Finally, the book also contains the script of a radio-play, "Death on the Up-Lift," which I'll safe for a separate review (read: filler-post).