I'm not the most qualified person to comment on the detective story in Italy, but I've always been amazed at the apparent quantity of classically-styled crime-fiction available in that Mediterranean country – ranging from the Titans of the Golden Era to translations of Detective Conan and Paul Halter. But where there any Italian mystery novelists who participated in the Grandest Game in the World? The answer to that question is yes and one of the most illuminating figures from their nook of the genre has recently made an appearance in English!

Augusto de Angelis is known as "the father of the Italian detective novel," whose series-character was Commissario Carlo de Vincenzi of the Squadra Mobile (Flying Squad) of Milan, but as interesting as his literary legacy were the final weeks of his life. De Angelis wrote during the days of Fascist rule in Italy and Il Duce's regime took a dim view of detective fiction, which they saw as glorifying criminal behavior and preferred a public image of an idyllic, crime-free Italy. 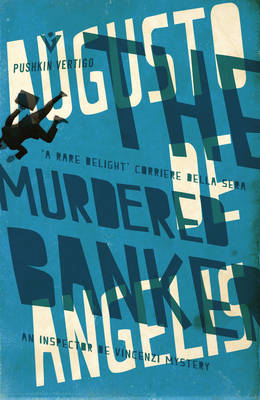 As a result, the Nestor of Italian crime-fiction was banned from the national bookshelves and De Angelis was eventually imprisoned as an anti-fascist in 1943, but his tragic end came upon being released and had a physical altercation with a group of fascists – sustaining serious injuries he was unable to recover from in his weakened state. This is, literally, the worst the fascist have done during their reign in Europe! What? They murdered a mystery writers! Name one thing they did was worse than that. Just one thing!

Earlier this year, Pushkin Vertigo, published Il banchiere assassinato (The Murdered Banker, 1935), which marked the (genre) debut of both De Angelis and Commissario De Vincenzi. Since then, there have been two additional translations: L'albergo delle tre rose (The Hotel of the Three Roses, 1936) and Il mistero delle tre orchidee (The Mystery of the Three Orchids, 1942).

So readers have an opportunity to sample some of the non-English Golden Age mystery fiction from a truly obscure and overlooked corner of the genre.

The Murdered Banker opens on a cold, foggy night and De Vincenzi receives an unexpected visitor in his office at the police station: his old school friend, Giannetto Aurigi, who seems not to be himself. Coincidentally, the ringing of the phone, "like three desperate screams," interrupts their conversation and De Vincenzi is summoned to an apartment at 45 via Montforte – which happened to be the home address of his friend.

An anonymous phone-call, reporting a murder, had lured Inspector Maccari to the apartment and there he discovered the body of a man in the sitting room: stretched out on the floor, clad in evening dress, with "a bullet hole in his temple." The body belonged to a wealthy banker, named Garlini, who's worth millions and Aurigi was in debt to him to the tune of "exactly five hundred and forty-three thousand lire." So that's a cut-and-dry motive right there, but the case turns out to be more complex than it appears on the surface.

There are a number of physical clues that obscure the matter, which range from a phial of perfume containing prussic acid, a stick of lipstick, a brace of revolvers, letters, receipts, ticket stubs and a clock that is running an hour fast, but there are also interconnecting relationships and hidden motives – forming "a disturbing web of mysterious and hidden facts." At the center of this web is "the fatal triangle," which consists of Aurigi and his fiancé, Maria Giovanna, who has a past with the tragic young man living in the attic apartment above Aurigi. On the sideline is Maria's father, Count Marchionni, who engaged the services of a private-eye, Harrington. 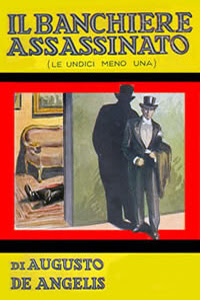 Harrington is an obvious nod to the detective-characters from the English speaking world and he even remarks how De Vincenzi only has to get his "little grey cells" working in order to solve the case. He was briefly setup as a rival detective, but, sadly, was sidelined well before the end of the story. I absolutely love rival detectives (e.g. Patrick Quentin's Black Widow, 1952), but Harrington was, perhaps, out of place in this book, because The Murdered Banker was written in the traditional of the police novels (roman policier) of continental Europe, which includes the work of Georges Simenon, A.C. Baantjer and Herbert Reinecker. The problem solvers in these books and TV-series are sober-minded, sensible and philosophical-prone policemen who often reach a solution by common sense thinking rather dazzling feats of deduction. And the solution also reflects this style of crime-fiction.

The identity of the murderer is slightly underwhelming and the plot turns out to be a simple, grubby kind of murder, "an ugly crime," but the killer did a wonderful job at obfuscating the whole business – basically committed one crime to cover-up another. So that part of the explanation was pure Golden Age and encourages to return to his work before too long.

While The Murdered Banker was not entirely perfect, I still found the book to be an interesting and rewarding read with a decent enough plot. I've always been curious about the Golden Age detective stories from non-English speaking countries, but only recently were some of these traditionally-styled mystery novels from France and Japan translated into English. And now we can add Italy to that list. So we're finally getting somewhere!

Finally, allow me to draw your attention to my previous review, Koromu no satsujin (Murder in the Red Chamber, 2004) by Taku Ashibe, which offers a feast of locked room mysteries and seemingly impossible situations. There are about seven of them. So that should pique the curiosity of some of you!
Geplaatst door TomCat on 12/02/2016