"To know that one of your relatives is a murderer is bad enough..."
- Sally Bowen (The Seven Deadly Sisters, 1948)

With a nickname like the "Swedish John Dickson Carr," it was inevitable that Jan Ekström's Ättestupan (Deadly Reunion, 1975) ended up on my prodigious pile of books to read, but as John Norris from Pretty Sinister Books pointed out in his review, it has more in common (stylistically) with Ross Macdonald than Carr. However, the plot's exposition is as clever and twisty as those of Ekström's predecessors, and I would place the book a lot closer to Christianna Brand than Carr – who provided a wonderful blurb for this novel, "a beautifully twisted, many-colored skein which it was a pleasure to try to unravel." Do I agree with her. Yes! Let's find out. 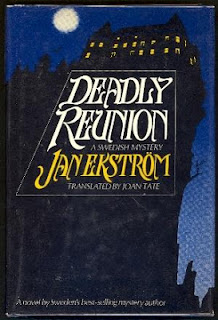 You could call Aunt Charlotte Lethander blessed, an elderly woman of great wealth whose ninetieth birthday is looming, and has one more thing to accomplish in her life time: consolidating the three warring branches of her family and summons them to her home. And they come swooping down like a flock of vultures.

John mentioned "the story is filled with the kind of brooding aura and dark family secrets that fill the cases of Lew Archer," and this style is apparently quite common in Scandinavian crime fiction, but this dark and brooding ambiance also reminded me of the German TV-krimi Derrick – in particular the episode Der Fall Weidau (1986). Contrary to the usual tone of the series, Der Fall Weidau had a classically-structured plot in which the dour-looking Oberinspektor of the Munich Kriminalpolizei, Stephan Derrick, has to visit a country estate to look into the poisoning of a young family member and I suspect that the ending was made as depressing as possible to make up for any fun viewers may have experienced while figuring out who-dun-it. Ekström's story is more tragic than depressing and a clever one at that.

Problems arise when Victor Bernheim, a womanizing photographer, runs low on funds and decides to cash-in on a "security," a letter containing incriminating information, which he offers up for sale to his father, Martin, for the sweet sum of 15.000 kronor. What we have here is a classic set-up for an old-fashioned murder, however, it's not a case where the blackmailer or the victim is rubbed out... but both of them!

On first impression, there is nothing to dispute that Martin, after having shot Victor, locked himself into his bedroom and took his own life by filling the room with the noxious fumes from the bedside fireplace, but Bertil Durrell agrees with the opinion of the family that there's more to it than just a simple case of murder/suicide – and soon uncovers evidence to support their theory. But a lot of those clues make the affair look even twistier and more impossible than when they first assumed foul play. The gun found in Martin's room is not the murder weapon and the damper was open, making it impossible to die of carbon monoxide poisoning, but that’s how Martin died. The smoldering family secrets, brooding relationships, rivalries and even an unresolved death from the past, which all may have a bearing on the murders of Victor and Martin – showing why I think Deadly Reunion is closer to Brand than Carr (e.g. London Particular, 1952).

Brand's stories usually concern a closed circle of suspects that drive the plot and she turned her hand to the locked room from time to time. If this was a Carrian story, the ancestral precipice and its ghostly legends would've been a more prominent presence in the book, than just a story from an old lady, and probably have been the backdrop for a spine-chilling scene, played out underneath a pale moon, before the murderers downfall. I can only imagine what Paul Halter would've done with the death of Stella Corn, who was found at the foot of the precipice several years before the opening of this story, which he would no doubt turn into an impossible murder. Definitely not a Carr, but the solution to the locked room doesn't disappoint nor does the rest of the explanation. I can recommend Deadly Reunion to anyone from ardent whodunit fans to avid readers of crime/thriller novels.

Jan Ekström appears to have been a part of an international wave of mystery writers, emerging on the scene during the 1970-and 80s, who made an admirable attempt at bridging the gap between the detective stories of yesteryear and contemporary crime novels. Not surprisingly, these are the mystery writers from the post-Golden Age period that I enjoy the most, but alas, their voice was not the prevailing one.

But it does make one wonder... did the Silver Age we've all been longing for passed-by unnoticed, decades ago, like Chesterton's "invisible man"? Or did the deluge of spy and thriller fiction act as Carr's "silver curtain"? On the upside, we seem to be in the spring of another, brighter period for the traditional detective story and the next book on my pile may end up proving that we're on the right track.

Oh, and yes, despite my hammering that Deadly Reunion is not really all that Carrish, I still picked "The Golden Hag" as a post title, but how could I not, after the fabulously rich Charlotte Lethander uttered "for an ancient hag it would be eminently suitable" and better than "Lock, (Family) Stock and Two Smoking Barrels."
Geplaatst door TomCat on 2/03/2013