Even in the Best Families

"But, my family being what it is, even those short periods furnished plenty of incidents that might have been the prelude to a murder..."

When you closely scrutinize the list with names of novelists that have one or more detective stories to their credit, it's not always an inexplicable enigma how a bunch of them ended up, knee-deep, in the boggy mire known as biblioblivion and are sinking ever deeper with each passing year. They may have had a feeble grip on their plots or sketched their characters without turning them into portraits. Their dialogue may have reverberated with the buzzing of insipid babbling or they were competent, but lacked that modicum of originality necessary to stand out in the crowd. On the other hand, if you see a writer trudging through that slough and bog who had everything, from a way with words that gave the illusionary thumbing of a heartbeat to their characters to a surprisingly effective and novel way to tackle plotting, you can't help but stare in disbelief as they slog pass you. 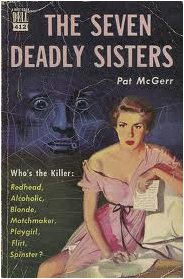 Pat McGerr was one of those mystery writers who had the ability to draw convincing characters, construct ingenious plots without being over-elaborate and presented them in an unconventional way – which also had a surprising touch of realism. McGerr reasoned that the basic formula, for penning a traditionally-styled whodunit, hinges on figuring out whom of the suspects planted a dagger in the neck of the body, but what if a detective story kicks-off with divulging the identity of the culprit and you have to work your way back in order to figure out who was murdered? This simple reversal allows a writer to turn even the simplest of crimes into genuine puzzlers and her first effort with this plot device, Pick Your Victim (1946), is one of the authentic masterpieces of the genre, but McGerr outdone herself with her second novel, The Seven Deadly Sisters (1948), in which we are unaware of both the identity of the murderer and the victim – an absolute gem of a who-was-done-in-and-by-whom!
Sally Bowen has moved with her newly acquired spouse, Peter, back to his native England to settle down and start a family of their own, but a frantic letter from a friend, expressing condolences and sympathy over the fact that her aunt committed suicide after poisoning her uncle, throws a sizeable peddle in the tranquility of her mind – especially since the letter neglects to mention any names. The problem is that Sally Bowen has seven aunts who are all, more or less, unhappily married and equipped with adequate motives to act on the "till death us part" line from their wedding vows.
Here's how the titular sisters are introduced in the dramatis personae in the Dell edition:
Aunt Clara:
The oldest sister, a determined matchmaker. Her domineering tactics force all of her sister in more or less unhappy marriages.
Aunt Tessie:
The schoolteacher sister, remains a spinster into her thirties. She finally marries a man younger than herself.
Aunt Agnes:
The shrewish sister, is a redhead who makes life miserable for two husbands.
Aunt Edith:
The weak sister, was maneuvered into an unhappy marriage and finds solace in the "magic bottle."
Aunt Molly:
The beautiful sister, is a free-lance artist. Too much prodding toward matrimony has made her afraid of men.
Aunt Doris:
The glamorous sister, very frankly likes men, and she doesn't let the conventions cramp her style.
Aunt Judy:
The youngest sister, is only a few years older than Sally. She has been spoiled by too much indulgence.
The knowledge that one of her aunts poisoned her husband without knowing which one prevents Sally from immediately establishing contact with the home front, but the uncertainty wages a war with her peace of mind and begins to tell her husband all about her family during an all-night conversation – from which a picture emerges of a family that could've been a happy one if one of them didn't do all the wrong things for all the right reasons.
This on-going flashback covers a period of several years and tells how most of the sisters were married off to the wrong husbands, recounting heated domestic disputes and uncovers underlining relationships that could've been lifted from the storyline of a second-rate, mid-day soap opera, but the way in which McGerr exploits these elements is everything but corny – and would make for a great television drama! But within this narrative there are also a few neat clues tucked away, accompanied with some clever misdirection, but I have to beat my own drum, once again, for being extremely lucid in picking up on all the hints and pointing the finger at the murderer before arriving at the final chapter, however, this took nothing away from a very effective conclusion – which felt both logical as well as an inevitability.
The only part that gave me pause for thought was the feasibility of Sally being able to give her husband an accurate, detailed and uncolored account of events stretching back several years that provided him with the information needed to positively identify the murderer and her victim, but if you can accept that premise you have a brilliantly executed and original detective story on your hands. I recommend this one without hesitation.
I have one more Pat McGerr novel on my to-be-read pile, Follow As the Night (1951), but I will safe that one for the one-year anniversary of this blog – which began with a review of her first novel.
Geplaatst door TomCat on 1/21/2012