"The distinction between the past, present and future is only a stubbornly persistent illusion."

As the days that lead up to the one year anniversary of this place dwindle down, crossed off the calendar, one after another, like names on the guest list of Mr. U.N. Owen, it slowly began to morph back to its original incarnation – a blog that is dedicated to the great old detective stories of yore! There was a stretch of time when this place resembled a shrine for new-fangled, neo-orthodox mysteries, but it appears that the ghosts of past writers, such as Anne Rowe and Willy Corsari, reclaimed this digital mausoleum from the living. Well, they are about to welcome another revenant spirit, whose memory has faded like a neglected black-and-white photograph, in their midst. 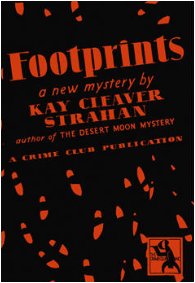 Kay Cleaver Strahan is one of those names that has been accumulating dust in the attic of our collective memories for decades, but nobody seems to remember why, exactly, this author was stored up there. I guess it was a convenient, spacious spot when they began tidying up the genre.
Strahan was a writer who designed a number of plots that functioned as the structural skeletons for seven mystery novels, which were, in turn, craftily deconstructed by a seasoned crime analyst, named Lynn MacDonald, and, from what I gathered, there was a different approach in storytelling in each of these narratives. Her endeavors at finding new and fresh perspectives, to put a detective story on paper, were rewarded when her novel Footprints (1929) became the recipient of the Scotland Yard Prize – handed out by 100 independent booksellers that were affiliated with the Collins Crime Club for the best mystery of the year.
Footprints opens in the present time, which, in this novel, is 1928, but spends most of its pages on looking back at a murder that was committed in the year 1900 and we are almost immediately confronted with a rather dubious and shaky confession. Neal Quilter confesses to his sister, Judy, that he has come to believe that it was him who was responsible for the death of their father, all those years ago, but the circumstances, in which the murder was carried out, won't allow this admission of guilt to stand.
The Quilter's are among the best-known families in Oregon, whom transplanted their lives and family tree from the South during the Civil War, and lived together, as an outwardly happy and caring family, on a big farm known as Q 2 Ranch – until the report of a pistol shot ripped through their lives and awakened that ogre known as suspicion. This one shot was enough to wrench them all from their peaceful slumber, but they found themselves unable to leave their bedrooms – as their doors were all locked from the outside. The keys were later found in a pile on a table in the bedroom of Richard Quilter, who was dying in his bed from a gunshot wound in the chest, next to an open window with a rope dangling out of it. 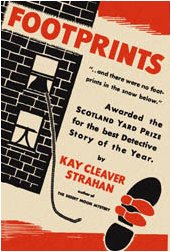 Richard Quilter, with his dying breath, murmured the words, "red mask," as he inclined his head towards the window, however, when the shot rang out it had stopped snowing for some time and the house was marooned in an expanse of unbroken snow – and there were rolls of undisturbed snow on the windowsills. This literarily threw the possibility of an intruder out of the window, but the absence of a gun in the room makes suicide as unlikely a possibility as murder and the case went unsolved for three decades.
That is, until Dr. Joe Elm, the likeable family physician and friend, who shares the concern of his friends over the mental well being of Neal, decides to consult Lynn MacDonald – a renowned criminologist. Nearly thirty years have elapsed since the fatal bullet was fired and there's little left for her to go on. The house has been remodeled and refurnished several times, family members have died off and the intervening years have made the memories of those who are still alive unreliable, but the family does have in its possession two parcels of letters that were penned by the youngest members in the house, Neal and Lucy, to their sister Judy – who lived away from home at the time.
Based on these scraps of paper, written by a child and disturbed young man, MacDonald has to come up with, not only, a possible murderer, but also gauge for a motive and figure out the method. The picture that emerge from these letters is refreshingly different from your usual, stock-in-trade dysfunctional family and showed a relatively normal family who are attempting to deal with problems that life throws at them. There's a less-than-popular in-law making an entrance into the family and there are financial problems that may force them to sell their ranch, but no stereotypical patriarchs ruling over the private lives and clutching the purse strings of the family with an iron first or fooling around with changed wills.
It's a fairly realistic portrayal of a family during the early 1900s, or, at least, I imagine it is not an entirely unrealistic representation of such a family during that period in time and the biography of the Quilters, provided by Dr. Elms, is equally fascinating – placing this book in the Van Dine-Queen School of Detection. This detailed description traces the family history of the Quilter's all the way back to the settlement of America and their exodus from the South because of their commendation of slavery. Not to mention that it also introduces several plot devices that would resurface in the succeeding decades: Q. Patrick's S.S. Murder (1933) also uses a series of letters to relate the story, the retrospective look at a murder from the past foreshadows Agatha Christie's Five Little Pigs (1943) and Sparkling Cyanide (1945) and Ellery Queen (who debuted in the year this book was published) would make the dying message their trademark.
The only thing that mucks it up is the almost Gladys Mitchell-like vagueness where the solution is concerned. There's an interesting false solution proposed towards the end before the actual culprit is revealed in the final sentence of the book, but this impressed me more as a guess than as a statement of fact. This last moment "surprise" left absolutely no room whatsoever to explain how this person was either locked into the bedroom or trodded over snow without disturbing its surface, although, if you know who is fingered for the murder you can pretty much guess the method. But it's a sloppy writing/editing job on the part of both the writer and editor. This is a shame, because up till the final pages this has been an excellent read and could easily become a favorite of mine – even with a routine solution to the impossible nature of the murder.
All in all, this is a nicely written story that must have seem like a breath of fresh air at the time and some of its originality still shines through, which makes it worth picking up when you come across a dirt-cheap copy of the book, but the ambiguous (read: sloppy) ending should not make this one of your top-priorities on your wish-list.
K.C. Strahan's bibliography:
The Desert Moon Mystery (1927)
Footprints (1929)
Death Traps (1930)
October House (1932)
The Meriwether Mystery (1932)
The Hobgoblin Murder (1934)
The Desert Lake Mystery (1936)
Geplaatst door TomCat on 1/07/2012