It's September, 314 AD, when a fiendish ripper, known as the Nefandus, reemerges in the Caelian Quarter, "a rat warren of alleyways," after years of dormancy and vents his ire on the local prostitutes while tearing through the neighborhood. In another part of Rome, in far more august circles, Emperor Constantine and his mother, Empress Helena, are making plans for their empire, but not before smoothing out a few creases and turn to their trusted agentes in rebus, Claudia, for the job.

Murder's Immortal Mask (2008) is a typical fair back in time, entailing practically all the elements, readers have come to expect from one of Paul Doherty's historical mysteries: like an uncaught murderer who crawled out of time's abyss and the recluse whose military past is the source of an all-consuming secret. 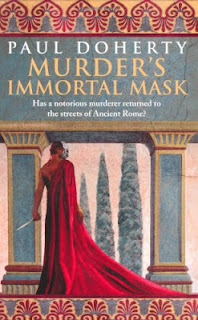 Attius Enobarbus was a cohort of the fallen emperor Maxentius, snuffing out Christians and plundering their shrines during his reign, but times have changed and the only reason he's tolerated hinges on important knowledge he may possess – such as the secret location of the tomb of Peter the Galilean. But lately, Attius' wariness confined him to his chamber, which could double as a vault, however, secure and sealed rooms can be about as dangerous as a lonely track way – especially in Doherty's fancies. An assassin managed to slink in and out of the room unnoticed, stabbing Attius in the interim, but simplicity, if not to say banality, is the crux of the illusion here. I've noted before that Doherty's locked room tricks can be either simply clever or disappointingly simple, but the one he proposed here fits neither of those descriptions and felt like an inceptive idea that was left unexplored. I'm afraid this one was a bit too basic to meet my demands.

Fortunately, Murder's Immortal Mask did not depend solely on the deliverance of the locked-room angle to succeed as a historical novel of crime. That was just one facet of the plot.

The Nefandus' killing spree in the Caelian Quarter is somewhat reminiscent of Jack the Ripper's reign of terror over Whitechapel in London's East End of the late 1800s, and such persons, as Doherty remarked in his endnotes, must have existed in such places during that time. But what makes it interesting is how the Nefandus ties-in with the many twisted strands of this story, the dangerous, but colorful, backdrop it provides for Claudia and it's better clued than you'd expect – one clue a medical man gave on one of the Nefandus' victims was interesting to say the least. Well, it does give the reader a nudge in the right direction.

On a whole, Murder's Immortal Mask is a fun blend of the ratiocinative detective and the serial killer story, set during a tumultive period of political and religious upheaval in Ancient Rome, in which Doherty plays his formula like a violin – and should please fans of his work and this series. But to be honest, while not unsuccessful as a mystery, it was kind of bland and I haven't enjoyed this series half as much as those that follow Sir Hugh Corbett and Judge Amerotke around, but than again, that's personal preference speaking.
And in case you missed it, I posted a notice of the two year anniversary of this blog a few days ago.
Geplaatst door TomCat on 2/22/2013