Where the Devil Slumbered

Ghosts, goblins and other grotesque imaginations that pried themselves loose from the human mind have proven themselves prone to sudden bursts of stage fright, whenever they are expected to perform under controlled conditions and the cold discerning eye of reason, but what if you have a reputedly haunted room with a malevolent ghost as a permanent tenant... who's not shy at all? 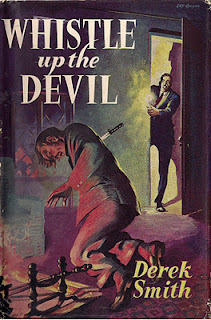 Well, that's the plot of Derek Smith's Whistle Up the Devil (1954), an ingenious locked room novel that has been on my wish list for years but got top-priority when Patrick posted a mouthwatering review of the book and spiced it up with lots of background information on the author of this little gem. I won't reproduce it here, but from it a picture emerged of a man we all would've loved unconditionally. Derek Smith was apparently a kind and generous man who was above all a mystery fan, and a clever one as that. Patrick began his review with his concluding opinion of the book and it's one I would like to echo before I begin to look for the words to shape mine: Whistle Up the Devil is one of the most ingeniously concocted and worked out impossible crimes that I have read and you almost wonder if Satan himself sat down with Smith to plot the story.

The story opens with an early phone call from Chief Inspector Castle to his friend and dilettante sleuth, Algy Lawrence, with a request to go to home of personal friend, Roger Querrin, who's determined to keep an appointment with the family ghost in a locked and haunted room – giving a perfect cover for an assassin to strike and unburden the guilt on a ghostly murderer who can't be cuffed or hanged for it. Everyone in his household is trying to keep Roger from spending the evening with a long dead relative, like his fiancé and his brother, who's worrying himself into a straightjacket, but he stands firm and guards are posted outside the room to stand guard. (including a policeman outside who keeps a hawk's eye on the window). But naturally a piercing scream shatters the peaceful night. And as the door is taken down, they're only just in time to see Roger taking his last breath as he collapses. A dagger that was in a sheath on the wall was sticking out of his back like a well-fed parasite.

Unfortunately, the supernatural elements are not played up as one would expect from a premise like the one I just sketched and this was perhaps most notable in the Querrin family legend, which gets a brief and a guess of an explanation towards the end, however, this is merely a stylistic flaw and one that's more than compensated with an intricate plot that is woven like a mesh of hex netting. There is, for example, the obligatory "Locked Room Lecture," nearly all these novels with a grand status seems to have one, but here's its not just to show-off the authors knowledge of the genre but to drive the reader (and Castle) up the wall by demonstrating just how impossible this murder really is – simply by eliminating every known trick in the book.

Whistle Up the Devil is also scattered with references to other detective stories and they're not the usual bunch of suspects, like The Hanshews The Man of the Forty Faces (1910), Rupert Penny's Sealed Room Murder (1951), which had a good trick but was tedious to read, and Clayton Rawson's Death from a Top Hat (1938), showing the individual taste of Smith.

As one of those celebrated, but obscure, monuments of the locked room sub-genre, there's also the second obligatory murder that mimics the maddening impossibilities of the first one and this time the backdrop is between the walls of a room supposedly a stronghold of safety: a prison cell in an occupied police station. A man named Simon Turner was deposited in one of their jails after assaulting Algy and sergeant Hardinge during a nightly prowl on the Querrin premise, but prying any information from him on what he may have seen is another impossibility dropped in the lap of our investigators – followed by another one when the murderer made sure he stays as quiet as humanly possible. The lock of the cell door was picked and Turner had been expertly strangled and according to the medical evidence the murder took place when Algy and Hardinge were talking in the Charge Room, which you have to pass if you want to go the cells. Guess what... they didn't saw a soul! Not a visible one, anyway.

The murders are pulled off with the routine a stage magician saws a woman in half, but, surprisingly, it did not lack any believability because Smith dovetails every snippet of plot together to form a coherent sequence of events that you can’t help but believe it could be pulled-off like that. I also loved how he continuously made me switch between two suspects only to show me what a fool I have been in the end. This makes it very heart to care for a few not so well drawn characters, ghosts who prefer to keep snoring in their graves or tip-toeing poltergeists. Whistle Up the Devil simply is a collaborative labor of love between the enthusiastic heart and sharp brain of a very big mystery fan. So much is obvious from reading this book.

Smith did wrote a follow-up novel, Come to Paddington Fair (1997), but he was unable to find a publisher until a fan published it in a limited release of 100 copies in Japan (published in English) and is impossible to find. If you want to know about Smith, I urge you to read Patrick's in-depth post of this book and the man who penned it. Oh, and Patrick... Damn you! You were not suppose to tempt me with our tempting reviews. Aim for the unenlightened masses!
Geplaatst door TomCat on 7/20/2012