"Imitation is the sincerest form of flattery."

After perusing the article "C is for... John Dickson Carr," an unabashed piece of hero worship from fellow blogger Sergio, a germ of an idea began to fester and grow in my mind, but with it came a knock on the door and found a problem on my doorstep. The instrument I exert to trumpet his praise broke after beating a dead horse with it and more than enough people are already of the opinion that I should get a room for me and the ghost of John Dickson Carr. So I decided to adjust my focus for this post and take a look at some of the stories that he inspired others to write.

Well, I guess I have to start with the late William Brittain, a novelist and school teacher, who scattered the pages of The Ellery Queen Mystery Magazine and Alfred Hitchcock's Mystery Magazine with an abundance of short stories – including "The Man Who Read" series. It's a series of stand-alone mysteries centering on readers of detective fiction that are put in a position where they have to apply the knowledge culled from the stories of their favorite mystery writer to solve a problem of their own... or to create one.

"The Man Who Read John Dickson Carr" is a young orphan, named Edgar Gault, who discovered the undisputed master of the locked room mystery at the impressionable age of fourteen, imbuing him with the conviction that, one day, he will bring his stories to life – preferably with his unpleasant uncle as the victim. The trick of the locked door is almost as good as the final sentence of the story, which is a real kicker, and it's just overall an amusing and a very rich story. It places the inverted mystery in the convinces of the locked room and even gives you, somewhat, of a character study of the protagonist, but, above all, it's just fun story to read. I wish the entire series, all ten of them, were gathered in one easily accessible volume. Messrs Crippen and Landru, are you taking notes? Until then, you can find this story in Murderous Schemes: An Anthology of Classic Detective Stories (1998).

Norma Schier was another mystery writer who had her tongue firmly planted in her cheek when she began to pen a series of short stories for The Ellery Queen Mystery Magazine, in which she harlequinade her most famous predecessors – from Agatha Christie and Ngaio Marsh to Clayton Rawson and John Dickson Carr. Most of her stories perfectly captured the heart and soul of the originals and have the added bonus of being anagram puzzles. You can figure out whodunit and who's being spoofed by simply decoding the anagrams.

"Hocus-Pocus at Drumis Tree" (published under the byline Handon C. Jorricks) was her nod to John Dickson Carr, which takes place in a reputable restaurant where it's not the custom to spike a glass of champagne with poison and then pass it around, but that's exactly what happened. Enter Sir Marvin Rhyerlee! Who's miffed that he can't enjoy a quiet lunch without someone dying under impossible circumstances. Schier admitted that her little pastiche does little justice to Carr's plotting technique and knack for coming up with impossible situations, but the attempt that was made here is definitely being appreciated. You can find this story in the collection The Anagram Detectives (1979). 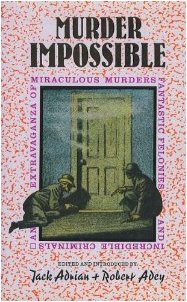 Alex Atkinson wrote another parody, "Chapter the Last: Merriman Explains," which is more a spoof on Carr's detectives than his plotting technique and someone on the JDCarr forum noted that the more Carr you've read the more you'll appreciate it. I agree. It's a brief, but fun, distraction and can be read in the anthology Murder Impossible: An Extravaganza of Miraculous Murders, Fantastic Felonies and Incredible Criminals (1990).

Another humorous excerpt, lampooning Dr. Gideon Fell, comes from the word processor of one of our very own, Barry Ergang, who was inspired to write "Dr. Gideon Fell, Hardboiled Sawbones" after a comment from Nick Fuller berating the atrocity that was The Mrs. Bradley Mysteries – a TV series that butchered a number of Gladys Mitchell's most enjoyable novels. Here is Nick's full-comment that can double as a synopsis for Barry's story: "It is like adapting Carr, and making Dr. Fell a cantankerous hard-drinking medico on the sleazy streets of London's East End who deals with professional crime of the hard-boiled variety and with an awful number of demented blondes, without an impossible crime in sight." The story can still be read by clicking here (GAD archive). 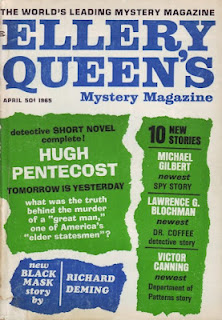 William Krohn's "The Impossible Murder of Dr. Satanus" was written in a more serious and darker vein, when the author was only 18-years-old, and almost reads like a love letter to John Dickson Carr and the locked room mystery. Krohn's introduction to the genre came a few years previously, when he read The Three Coffins (1935) and the Cult of Carr welcomed another member in their midst. The story itself dribs with Carrian influences, involving the stabbing of a magician in closed and moving elevator, with a solution that does not rely on gizmos like a certain other story I could mention – and I can only imagine that Carr himself must have beamed with pride after finishing the story (it was published during his lifetime). Krohn penned a second story for the EQMM, but it was rejected as too complex and eventually moved away from detective fiction to become a film critic and expert on Alfred Hitchcock. I wonder if a copy of that story survived. Anyway, as Darrell from The Study Lamp remarked, the story has been deservedly reprinted in The Mammoth Book of Perfect Crimes and Impossible Mysteries (2007).

By the same token, I should also mention Paul Halter's The Fourth Door (1987), whose Dr. Alan Twist is a "thinly" disguised version of Dr. Gideon Fell, and Jean-Paul Török's The Riddle of Monte Verita (2007), but I already discussed them in depth on this blog. However, Peter Lovesey's Bloodhounds (1997) should be mentioned, even if it's more of a general wink at the genre than one specifically meant for Carr. The bloodhounds of the title are a group of fanatical mystery fans, ranging from locked room enthusiasts to hardboiled fanatics, who meet once a week to discuss detective stories – until one of them is murdered aboard a locked houseboat. A very clever, fun and eerily recognizable book that should belong on the shelves of everyone who's permanently under the weather with the sleuth flu. It's about us!

I probably missed a few and could probably find more, but I think this was more than enough hero worship for this Sunday. My next sermon will be on how Carr has fed our hungry brains and banished mediocrity from our bookshelves. Thank you Carr for unlocking doors and forgiving our sins, like you did with the murderers in so many of your books, past, present and future. In name of the Father (Edgar Allan Poe), the Son (Sir Arthur Conan Doyle) and the Holy Spirit (G.K. Chesterton). Amen.
Geplaatst door TomCat on 7/15/2012