Until Death Tore Them Apart

"Once I went professionally to an archaeological expedition--and I learnt something there. In the course of an excavation, when something comes up out of the ground, everything is cleared away very carefully all around it. You take away the loose earth, and you scrape here and there with a knife until finally your object is there, all alone, ready to be drawn and photographed with no extraneous matter confusing it. That is what I have been seeking to do--clear away the extraneous matter so that we can see the truth--the naked shining truth."
- Hercule Poirot (Death on the Nile, 1937)

The primary focus of this blog is to judge mysteries of a particular vintage, uncovered from the dust-covered shelves of the endangered, second-hand bookstores or plucked from the catalogue of an online book dealer, occasionally venturing out of the obscure to discuss one of the modern guises of the traditional detective story, but, notably, I have mostly left the familiar brand names alone. This has a practical reason: I already covered most of them before I began blogging, from G.K. Chesterton, Conan Doyle and Ellery Queen to Agatha Christie, Dorothy L. Sayers and Edmund Crispin, forcing this Sommelier of Crime to descend into the dark and mouldy cellar of the genre to hunt among the cobwebs and dust bunnies for more, but after patching up my list of favorites I wanted to revisit some of these old favorite – already resulting in a review of a novel that I'm particular fond of. It also dawned on me that it had been ages since I read Agatha Christie's Death on the Nile (1937), or any story from her hand for that matter, which is an oversight that needed to be corrected ASAP. 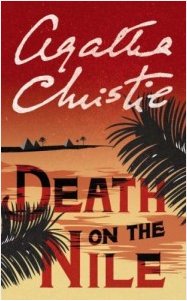 Death on the Nile has a plot as classic and well-known as two other of Christie's most famous novels, The Murder on the Orient (1934) and And Then There Were None (1939), and writing a synopsis is almost superfluous, but hey, it would be a very short review otherwise – so here we go anyway.

Death on the Nile is, for me, the quintessential Agatha Christie novel and her most successful treatment of The Internal Triangle, which in turn produced a set of her best and most convincingly drawn characters. The rich and glamorous Linnet Ridgeway, the girl who had everything and wanted Simon Doyle, the man of her friend, Jacqueline de Bellefort, as well and snatches him away from her like Arsène Lupin relieves a cantankerous Duchess of her pearl necklace. Betrayed and broken-hearted, the hot-blooded Jacqueline begins to stalk the newly wed couple during their honeymoon in a particular nasty, but effective, way, eventually cumulating in a shooting incident in the saloon of the S.S. Karnak – gliding over the waters of the ancient Nile.

During a heated and emotional scene, Jacqueline whipped out a small pistol and bored a bullet through Simon’s leg bone, practically leaving him an invalid, after which she immediately wanted to kill herself and needed to be sedated with a nurse standing guard over here the entire night. However, when everything began to quiet down, someone seized the moment and purloined to gun, sneaked into Linnet's cabin and squeezed the trigger with the muzzle pressed almost against her head. With Simon and Jacqueline scratched off as suspects, Poirot and Colonel Race have to look among the cast of gargoyles that make up the remainder of the passengers for an assassin and they are remembered of a remark from Linnet how she was surrounded by enemies. As Milward Kennedy remarked, "a peach of a case for Poirot."

Having not touched any of Christie's books for several years, it had slipped my mind how good she actually was and how the title of the Queen of Crime is no exaggeration in any way – even after all these decades and with the 100th anniversary of the publication of The Mysterious Affair at Styles (1920) looming at the horizon. It also surprised me how still remembering the solution enhanced my enjoyment of the book instead of deterring it. I simply marveled at recognizing all the carefully planted clues, both physical and psychological ones, and it's almost inconceivable that anyone could miss them when you know how obvious they actually are, but that's the craft of the mystery novelist for you – and Christie was at the very top of the game. I always thought of Death on the Nile as one of the grand whodunits, but I think I appreciate it now more than I did back then when I read it for the very first time. There's also something else I appreciated, but I can't tell without running the risk of giving too much away to the clever and observant reader.

All in all, Death on the Nile comes fairly close to being a perfect detective story, with a plot and characters that balance each other out to a tee, and may very well be one of the Seven Wonders of the Golden Age.

Yes, I will (probably) dust-off one of the Christie's forgotten, attention-starved contemporaries for my next post. Maybe.
Geplaatst door TomCat on 7/12/2012