"I found some time ago that I have to be careful, while working on a novel, what I read."
- John Sladek.

In 1972, the Times of London organized a short story competition for detective stories and after the jury, comprising of Lord Butler, Tom Stoppard and the Queen of Crime Agatha Christie, had ploughed through a 1000 stories – it was John Sladek's "By an Unknown Hand" who let his fellow competitors biting the dust of defeat. His award: the story was published in The Times Anthology of Detective Stories (1972) and a contract to pen one of my all-time favorite locked room novels, Black Aura (1974), and he wrote a follow up a few years later entitled Invisible Green (1977). 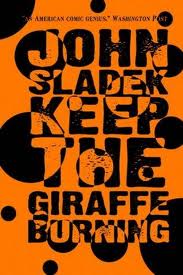 These stories are very well-known among locked room enthusiasts, like yours truly, but a let less familiar are the (non-impossible) short-short story "It Takes Your Breath Away," featuring Sladek's series detective Thackeray Phin, and a body of inverted mysteries with a twist, collected in Maps (2002), which I recommend without hesitation. But Sladek also wrote a parody on the impossible crime genre, aptly titled "The Locked Room," which is virtually unknown because it's inexplicably buried in a volume of science-fiction stories – Keep the Giraffe Burning (1978). It you've always wondered what would happen if you tossed Douglas Adams or Monty Python into the blender with John Dickson Carr's "The Locked Lecture," a chapter from The Hollow Man (1935), than you have to read this story.

The protagonists of this yarn are Fenton Worth, a lauded private investigator, and his valet, Bozo, but instead of taking on a case that's probably on their doorstep waiting to be let in he locks himself up in his library to read a mystery novel with The Locked Room (????) as its tantalizing title. As he reads through the pages, he begins to reflect on the miracles he has explained himself and goes over a lot of the familiar (and often trite) methods mentioned in Dr. Fell's lecture and has a good laugh at their expense. He also a few, uhm, interruptions from prospective clients.

Sladek also wrote a mini-short story into this already short, short story and has Worth reflecting back on "The Case of the Parched Adjutant," in which "a retired military gentleman of sober and regular habits" and "an ardent anti-vivisectionist" is murdered in his locked study on the day the circus was in town. It's campy and absurd, but futile to suppress a grin while reading it.

One more thing worth mentioning, is that Worth had to cut open the pages of the book he was reading. I was aware you had to do this back in the days with (some) hard covers, but I think this is the first time I have seen it being described in a story.

Yes! I have broken the dry spell of not reading any mysteries since posting my review of Max Murray's The Sunshine Corpse (1954)! Now, if you'll excuse me, I have to tackle a monument of a locked room story. As much as Carr hated the modern era, I think/want to believe he would have liked this galore of busted doors and broken locks that is my blog.

And in case you've missed it, take a peek at my second installment of favorite locked room mysteries: short stories and novellas.
Geplaatst door TomCat on 7/19/2012