At Night the Moonbeam Kisses the Flower Petals

"To be overcome by the fragrance of flowers is a delectable form of defeat."
- Beverley Nichols.

Beverley Nichols was one of those versatile centipedes, filling his waking hours with writing plays and composing music or clamber on stage as an actor or appear as an public speaker, who's best remembered, if he's remembered at all, for a series of books he wrote on gardening that are still in print today. The same, alas, can't be said for his five detective novels, written and published during the waning years of the Golden Age, about his mild-mannered and sometimes playful (botanic) detective Horatio Green – who possesses a sensitive nose and a proven track-record as a successful criminologist. 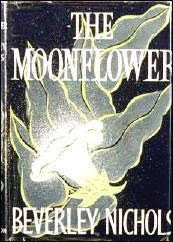 The Moonflower (1955; a.k.a. The Moonflower Murder) was my first brush with Nichols and it left me more intrigued than floored as the plot was, uhm, interesting to say the least. I can only describe it as a flawed gem. It focuses on the murder of the unpopular Mrs. Faversham, whose sudden exclusion from the house to the cemetery is merely viewed as a financial windfall by her selfish, live-in relatives, but slowly the case morphs from a common garden variety murder into an ingeniously contrived impossible crime – complete with hidden relationships, motive juggling and a nifty turn on that trite plot-device of changed wills on the eve of a murder. That's the main strength of this book: a solution that not only lives up to its premise but blows it out of the water. When Green began to explain, I stopped caring about any of the tiny imperfections, cracks or internal flaws that mar this little gem. Sometimes the story that goes with a piece of antique is of more value than the piece itself. So... now that we got the conclusion of this review out of the way, I can actually start writing it.

At opening pages of this story, Horatio Green's professional interest in Candle Court, Mrs. Faversham's estate, restricts itself to her plant room, where a rare moonflower from Uruguay is on the brink of blossoming, and as an amateur gardener he’s there merely as a privileged witness. But the classic, storybook signs of an imminent assassination are all there. Mrs. Faversham makes herself everything but agreeable, turning Beryl, her son's wife, out of there favorite room the provide a bed and roof to one of her guests. Subtle little things like that would drive a lot of people to murder, except for the fact that Beryl is more than deserving of a personal tormentor and I would not have blamed Nichols one bit if he had "spiced-up" the plot with her being pushed down a flight of stairs or into the swirling river that provides a permanent background noise at Candle Court. Unfortunately, the body count begins and ends with Mrs. Faversham, with a pair of hands clasped tightly around her throat, and the illustrious moonflower is found to have blossomed prematurely! 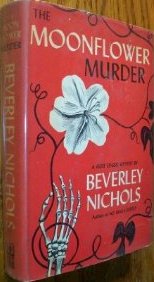 The plot is pleasantly busy, regularly throwing new developments and revelations at the reader and investigators, enwrapping both of them as tightly as in an insect in a spider's web. Green is also a fun detective who reminded another reviewer of Clyde Clason's T.L. Westborough, and, while I do not entirely disagree, he impressed me as a cross between a slightly more intelligent, but equally enthusiastic, Roger Sharingham and a toned-down Dr. Gideon Fell who only clung to his penchant for muttering cryptic remarks. He's also prone to staging little experiments to observe people's responses to it. It is, therefore, a pity he was unable to straighten out and streamline the plot better and deliver a genuine classic. Some clues were shared, others were not and some unnecessary plot threads could've easily been cutout without losing anything. I mean, what was the whole point of the convict's escape, when he was almost immediately eliminated as a suspect, or even bringing up that incident in Uruguay?

One more thing that's worth mentioning is that the book has a social conscience. Green is reprimanded by Beryl for talking to one of the servants as if he was a gentleman, but the reader knows what Green thinks of her opinion, which, as good form dictates, he does not utter out loud, and part of the solution raises an issue that would become an important one in the following decade – giving this fantastic story a surprisingly human touch. But it's not surprising that Nichols felt the need to point out the unfair treatment of people based on how or where they were born. You see, Nichols was so inconsiderate to be gay in a time when it was not done.

Tsk, tsk, Mr. Nichols. I thought you and Leo Bruce were plotting a mystery novel. No wonder we never got that crossover meeting between Horatio Green and Sgt. Beef. Oh, come on! You know it must have happened. They were contemporaries who wrote detective stories and you know how these things go. Bruce comes over see to the garden, they share a beer or two and before you know it there are two ties, a shirt and three socks drapped over a branch. Love... it's a beautiful thing. :)

All in all, I can recommend this book to readers prepared to take its flaws as well and to fellow aficionados of the locked room mystery. It’s not exactly a one-of-a-kind locked room, but it's close enough to being one and a good one at that.

Afterthought: the only thing I really disliked about The Moonflower is that it didn't provide me with an opportunity to work in a reference to The Thing in Mrs. Faversham's Attic without using a giant shoehorn.

"Most of us rather like our cats to have a streak of wickedness. I should not feel quite easy in the company of any cat that walked about the house with a saintly expression."