The Case of the Seven Bells (1949) by Christopher Bush

The Case of the Seven Bells (1949) is Christopher Bush's 35th novel starring his two series-detectives, Ludovic Travers and Superintendent George Wharton, which begins with giving the reader "a first-class and essential clue" to help them figure out why the murderer was caught. A murderer who was "clever enough for anything and the planning was perfect," but the whole scheme collapsed and the reason why it failed is that the weather was "remarkably fine" on the day the case began – while "the next few days were much cooler" and "generally wet." I love it when Bush hands out these so-called "starter clues" and one of the things that endeared him to me. 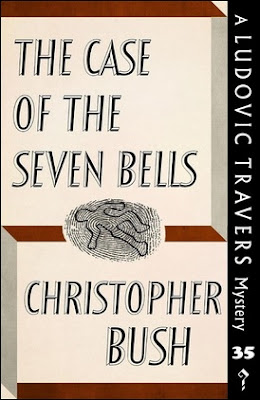 The Case of the Seven Bells opens with Ludovic Travers hanging around the office of Bill Ellice's Detective Agency, in Broad Street, when his receptionist/secretary announced a possibly client. A nervous woman, named Maudie Brown, who has a peculiar story to tell.

Maudie Brown is employed as a barmaid at one of those typically English public houses, the Seven Bells, but, every now and then, she would slip into Porelli's Café before the bar opened – to enjoy "a quick coffee and what she called a change of air." Last time she enjoyed coffee with biscuits, Maudie overheard two men "planning some sort of robbery" at "some place or other called The Grange." She described them as "a couple of flash boys or spivs," but, whoever they were, they noticed Maudie. And they followed her back to the Seven Bells. One of them tells her politely what happened to another woman who blabbed to the police "about something she'd heard," while playing menacingly with a razor blade. Ellice promises to see if he could do anything to help her, but he has a lot to discuss with Travers the moment the door closes.

There are "plenty of smart boys" in the Seven Bells area, but, when Travers goes to take a look himself, it seemed incredible that there could be such things "as razor-slashings, and spivs who laid plains in eating-houses, and frightened barmaids." Why was Maudie Brown all dolled up on her day off? Why did she use an accommodation address and where did she sleep? Not much else can be done until Travers receives an early morning phone call from Superintendent George Wharton. Summoning him to the scene of a murder in Carr's Hill.

Mrs. Wyster was a celebrated and famous film actress, "only real woman genius the English screen has produced," who was known to the world as Aubrey Grange and she was taking a rest at a small bungalow, The Croft. Practically nobody knew she was staying there. Now she lay dead, "shot at close range and no gun," in the hallway passage of the bungalow with the telephone line cut and the place ransacked. Travers sees an obvious link between the eating-house plot and the murder whereas Wharton is very dismissive of the idea, which brings us to the highlight of the story.

I mentioned in previous reviews that nobody from Bush's time nailed the dynamic between the amateur detective and official policeman quite like he did. 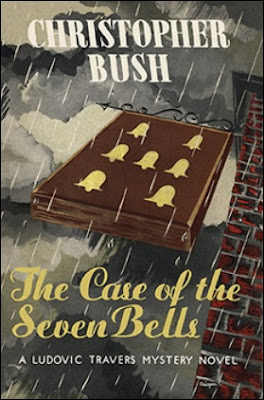 Travers mentioned in earlier novels he has the crossword kind of mind that easily lends itself to grand theorizing according to the Socratic method, "put up questions and suggest answers," which prove to be correct once in three times – that's not a bad average. But the much more theatrical and maneuverable Wharton habitually pooh-poohs him and his fanciful theories. So if one of his theories turns out to be wrong, Wharton has one more failure to bring up in future arguments, but it suddenly becomes "our theory" when it turns out well or simply calls it his idea if it's an absolute winner. But don't think Wharton is simply another carbon copy of Lestrade. More than once, Wharton has upstaged Travers by solving the case before he does.

I think it makes them possibly unique as Golden Age detective-characters and them butting heads over a particular tricky problem, in their own characteristic way, is usually one of the highlights of any Christopher Bush mystery. The Case of the Seven Bells is no exception.

Wharton believe it more likely Maudie overheard a gang of house-breakers, not spivs, because "black market stuff's their specialty." Spivs don't do this sort of job or shoot to intentionally kill, but a gang of house-breakers is not very likely either. They must have known Grange was living there and when she would be home. So why shoot instead of tying and gagging her? A burglar shooting his way out of tight corner is "rare enough." Not to mention a hanging matter. So why did it happen here? There are other strange complications. Such as a neighbor hearing the whimper of a baby on the night of the murder and their prized witness, Maudie Brown, has vanished from the face of the earth.

The Case of the Seven Bells had all the ingredients to make a densely-plotted, first-class Ludovic Travers and George Wharton mystery, but the plot regrettably is one of the most transparent, see-through in the entire series. Bush badly showed his hand here as he littered the opening chapters with alarm bells and red flags. You're unlikely to immediately catch on what, exactly, is happening, but enough to make you suspicious of certain things and be on your guard, which then goes on to spell out the solution in succeeding chapters – effectively turning the "starter clue" into a red herring of sorts. Something that could have worked had all those other clues, hints and tell-tale signs not been so blatantly obvious.

Technically, The Case of the Seven Bells is sound enough with an ambitious idea as the foundation stone of its plot and story. I half-suspect Bush intended the book to be the torchbearer of the (ROT13) snyfr vqragvgvrf trope as he shoved the question of alibis to the background, which the easily spotted solution and paper-thin characterization prevented. So only recommendable to fans of the series.