I remember reading Xavier Lechard's review of Paul Halter's La toile de Pénélope (Penelope's Web, 2001) back in the late 2000s, on his old blogspot, describing the story as "one of Halter's most orthodox detective novel" born from a challenge posed by a Belgian scholar, Vincent Bourgeois – challenging him to devise "a strange manner" to seal the scene of a crime. Xavier praised Penelope's Web as an "elegantly and soundly devised" locked room mystery that ended up looking "more like Christie than Carr." 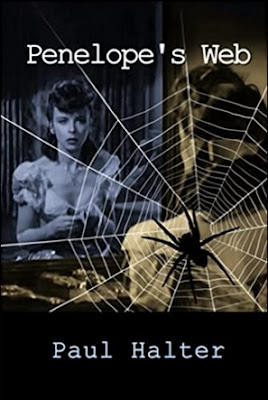 That old review never stopped to intrigue me and cemented Penelope's Web on my impossible crime wishlist. But, at the time, the only English translations of Halter's work consisted of a smattering of short stories with the first novel-length translation finally being published in 2010. Over the next ten years, John Pugmire of Locked Room International would go on to publish sixteen of Halter's novels and compiled two short story collections. Penelope's Web remained untranslated and tantalizingly inaccessible until recently. So let's cut through the tangled web of this long, eagerly anticipated translation.

Professor Frederick Foster was an entomologist who went to South America, "to study some rare species of spider," three years ago, but he went missing in Brazil and his body was eventually found on the bank of a river – murdered by a band of savages. Back home, the Foster household continued and his widow, Ruth Foster, became engaged to the local physician, Dr. Paul Hughes, who has been treating her for an illness of retina that made her practically blind. Ruth and Paul receive a nasty shock when they receive news that the body in Brazil was misidentified and Professor Foster is not only alive, but on his way back home to the village of Royston.

Professor Foster brought back more than just stories and anecdotes about his "incredible tribulations in the Amazonian jungle." What he brought back are some very rare, even hitherto unknown species of spiders and "practically tamed" one of them, which he named after his goddaughter, Penelope Ellis. Penelope is one of those unknown species with very well-developed silk-spinning organs and can spin a web faster than her sisters. Professor Foster placed Penelope in an open window of his study where she spun an fine, intricate silk web stretched across the oak window frame. Something that becomes important later on in the story.

So the situation is an uneasy one and begins to deteriorate when questions arise about his identity. A photograph of the professor turns up, but the name scribbled on the back, Peter Thompson, is that of his traveling partner. The man whose body was found on a Brazilian riverbank. Or was it? There's no denying Thompson is, or was, the spitting image of Professor Foster, but are they dealing with an impostor? A question that's not as easily answered as it should be.

Ruth is half-blind and Dr. Hughes always tried to avoid Professor Foster, because he had eyes only for his wife. Ruth's 12-year-old orphaned nephew, James, remembered him only as the uncle who read him Thousand and One Nights and Gulliver's Travels as an 8-year-old (he recently turned 12), while the professor brother-in-law, Major Edwin Brough, confessed he can't be sure either way – only Penelope believes Professor Foster is her godfather. Even if he aged, lost a lot of weight and grew a beard. So the police has to get involved and they tracked down a set of fingerprints from registry office to settle the matter. Shades of John Dickson Carr's The Crooked Hinge (1938)! But, of course, the fingerprints gets stolen during a frantic search for two escaped spiders. 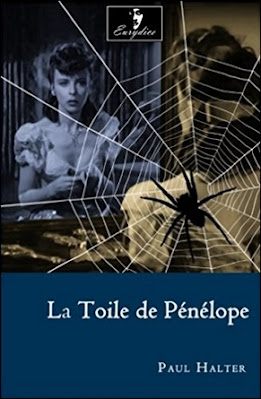 The situation becomes an impossible one when Professor Foster apparently shot himself in his study with "the only door bolted from the inside" and two, of the three, windows "more or less rusted in place." The third window is open, but covered entirely by Penelope's intricately-woven, unbroken silky web. The dark hole in his temple was still "oozing blood" when they broke down the door and there was "a strong smell of gunpowder in the room." However, the police quickly eliminate the possibility of suicide, but how could it have been murder? Dr. Alan Twist and Inspector Archibald Hurst happen to be on hand to help out the local policeman in charge, Inspector Mike Waddell.

Penelope's Web is one of Halter's shortest novels to date with the murder taking place close to halfway mark, which makes it tricky to discuss further details. Suffice to say, Halter delivered on his promise of not only finding a new way to lock and seal a room, but came up with an original, tailor-made solution to fit a very novel impossible crime. Interestingly, the how doesn't immediately reveal the murderer's identity, which was almost ruined by the annoying use of unidentifiable pronouns. Even when they made no sense to use in certain sentences. However, this hardly detracted from an overall enjoyable, clever and original locked room mystery. One that strongly reminded me of Halter's Le cercle invisible (The Invisible Circle, 1996) as it shared some of its strength and weaknesses.

While both Penelope's Web and The Invisible Circle both sport original impossible crimes with equally original solutions, but they're not exactly flawless and you can pick holes in them. For example (no spoilers), Dr. Hughes points out to Dr. Twist that there are "traces of gunpowder on the temple" indicating "the shot was fired from point-blank range," but, according to the solution, the shot was fired "through a piece of cloth." There are some other details about the locked room-trick that can be a little sketchy or make you scratch your head.

Penelope's Web is not merely the sum of its locked room-trick and Xavier said in his old review the story ended up being more Christie than Carr. I sort of agree. Penelope's Web is arguably better as who-and whydunit than as an impossible crime story as Halter expertly dangled the smartly clued solution in front of the reader's eye while simultaneously planting red herrings as a distraction. Judging the story purely as a whodunit, Penelope's Web stands as one of his stronger and more solid efforts. The locked room-trick is merely the cherry on top. You can say the same about the second murder, which gave the story a dark and tragic tinge, but a good use of a second murder that's not merely there as padding. Still a pity, because the second victim would have made an interesting detective character. Even if it was just for a one-shot.

So, yeah, I personally enjoyed and recommend Penelope's Web, but mystery readers who are still struggling with Halter might find themselves in another frustrating catch-as-catch-can wrestling match with his own unique brand of plotting and mystery writing.

Now that Penelope's Web can be crossed off my Halter/LRI wishlist, I hope Le crime de Dédale (The Crime of Daedalus, 1997), Le géant de pierre (The Stone Giant, 1998), Le douze crimes d'Hercule (The Twelve Crimes of Hercules, 2001), Le voyageur du passé (The Traveler from the Past, 2012) and Le tigre borgne (The One-Eyed Tiger, 2004) will follow soon!