Philip MacDonald was a British novelist and screen writer who was better known as a writer of thrillers as, even in his more formal detective stories, "thriller elements keep breaking in and taking over from the puzzle plot," but he produced a few genuine mystery novels – like the synthetic The Maze (1932). A detective novel, or "An Exercise in Deduction," calculated and designed to fool the genre-savvy mystery reader. 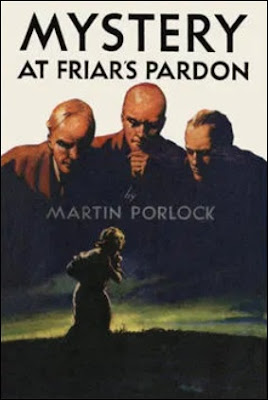 There's another obscure, long out-of-print pure mystery novel by MacDonald that has fascinated me for the longest time now.

Mystery at Friar's Pardon (1931), published as by "Martin Porlock," is not only logged as an impossible crime in Robert Adey's Locked Room Murders (1991), but seen as one of the few genuine John Dickson Carr analogs. A detective novel that apparently can be mentioned in the same breath as Theodore Roscoe's Murder on the Way! (1935), Hake Talbot's Rim of the Pit (1944) and Derek Smith's Whistle Up the Devil (1954). John Norris, of Pretty Sinister Books, noted in his 2011 review that Mystery at Friar's Pardon reads like a homage to Carr and "seems as if it were right out of the Dr. Fell series," but the book predates practically all of Carr's celebrated novels – suggesting that "perhaps this work of MacDonald's inspired Carr." Adey added more intrigue by acknowledging MacDonald "hit upon something new" by staging a drowning in "a locked, waterless room."

The book is regrettably obscure and in desperate need of fresh ink and paper, but imagine my surprise when I discovered Mystery at Friar's Pardon was uploaded to the Internet Archive as part of The Fourth Crime Club Omnibus (1937). Why, yes, I'll take one! So let's see whether or not this elusive locked room mystery lives up to its reputation.

Friar's Pardon dates back to the 17th century with the last stone being laid in 1699, "stern and yet graceful," but the man who had the house built, Sir Roger Westmacott, died two years later "under mysterious circumstances in his bedroom." So the place became the property of his eldest son, Sir Derryck, who was a soldier and didn't return until 1706. But when he returned, history repeated itself and he died in the same room as his father under mysterious, inexplicable circumstances. Understandably, his younger brother and his descendants wanted nothing to do with Friar's Pardon and tried to sell the place for generations, but they were unable to rid themselves of it until 1800.

Bertram Deaves purchased Friar's Pardon and began to renovate and expand the house, while "pooh-poohing all local stories and warnings," but he died six months after moving into the house when he was in the prime of his health and his son suffered the same fate – all in the same room. There was a doctor who swore the body of the last victim showed evidence of drowning, but his room was upstairs and there was no water in the room or any "signs of water upon his clothes or person." This only deepened the mystery. So the family sealed up the wing with the room-that-kills and installed caretakers until Mrs. Enid Lester-Greene finally bought the place. 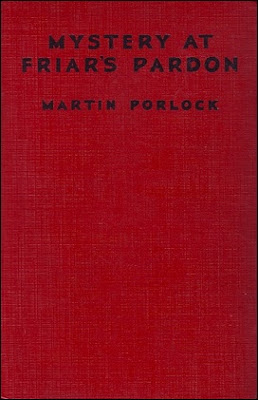 Mrs. Enid Lester-Greene is a famous novelist and playwright, known for such charming stories as Sir Galahad Comes Home and Oasis Love, who found the house of her dreams in Friar's Pardon. She not only refused to be scared away by "a lot of old wives' tales," but "in no way subscribe to belief in any supernatural influence over the house" and ordered the removal of the wall that sealed the haunted wing. Mrs. Lester-Green even decides to live in the haunted wing herself. She's not the only one who lives or stays there as a guest.

There's Mrs. Lester-Greene's daughter, Gladys, who has less personality or strength of character than her well-known, domineering mother. Major Claude Lester is Mrs. Lester-Greene's obstinate brother who sponges off his sister despite not liking her very much. Lesley Destrier is "sort of half guest and half family" who spends about seven months out of the twelve with the old lioness. Norman Sandys is Mrs. Lester-Green's well-dressed, competent secretary who's ever ready with a notebook to take down any ideas that can occur to his employer at a second's notice. There are also two notable house guests, Lady Maud Vassar and the eighth Baron Pursell of Mitcham. Lastly, there's the amateur detective of the story, Mr. Charles Fox-Browne, who needed work and accepted the post of estate manager of Friar's Pardon. Charles Fox-Browne had a varied army career as an intelligence officer and was for a time Chief Intelligence Officer to Brigadier-General Mallison's Brigade on the Somme. Something he has to rely on as the domestic strain and apparently supernatural phenomena become a prelude to murder.

Mrs. Lester-Greene is not the easiest person to be around, somewhat of a benevolent dictator, who appears to be generous with allowances, but prefers to be considered a Lady Bountiful and "see her see her protégés unhappy" than "finish being Lady Bountiful" – which would make everyone a lot happier. A situation not improved by rampant paranormal activity. Keys "plucked out from the keyhole" by invisible hands and doors locking, or unlocking, as by magic. A pair of pajamas disappear and reappear in a locked bedroom. A vase is smashed to pieces in another locked bedroom and disembodied hand with crooked fingers knocking on a bedroom window. And plenty of poltergeist activity.

The situation culminates when Mrs. Lester-Greene's calls on the house telephone from her room in the haunted wing, screaming "help... help... for God's sake help," but her bedroom window is locked from the inside. Charles Fox-Browne has to break a window in order to get in and open the door. But they're too late. Mrs. Lester-Greene's body is laid out on a couch, not a mark on her body, but the doctor determines she drowned. There's not a drop of water or damp patch in the room. Surprisingly, the local police is more than a little willing to settle for a supernatural explanation. 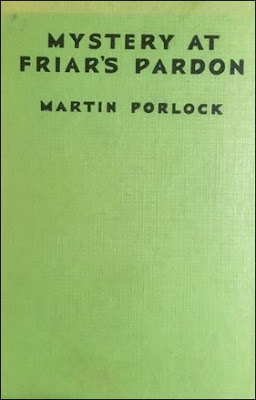 So the whole setup, while a little long, is full of promise and there's a worthy payoff in the end, but the scheme as a whole turned out to be the proverbial mixed bag of tricks. I think having just reread Carter Dickson's brilliantly plotted The Reader is Warned (1939) made all the more obvious MacDonald lacked the divine touch of the master. Let's get the bad out of the way first.

Firstly, MacDonald gave away the identity of the murderer during the first-half of the story, but not due to clumsiness, sloppy writing or plotting. Some might even completely miss it, but, to me, it made this person stand out like a wolf among sheep. I can't tell what, exactly, betrayed the murderer to me without giving away the solution, but it's something very specific and not used until decades later in a somewhat contentious detective story – namely (ROT13) Vfnnp Nfvzbi'f fubeg fgbel, "Gur Boivbhf Snpgbe"). Secondly, the locked room-trick at the heart of the crime is routine. Not as bad as a secret passage or a pair of pliers to turn the key, but not good or original enough to warrant a reputation as an elusive impossible crime classic. Thirdly, the ghostly activity never gives you the impression that's anything else but cheap trickery, because the reader is never told what's suppose to be behind all those "queer deaths." MacDonald briefly goes over the history of the house and it's unfortunate occupants, but not why the owners started to drown in a bone-dry room in a new house with no history to speak of. Did they recycle building material from an already haunted house, paved the basement floor with headstones or simply a curse? The reader is never told and so the hauntings come across as nothing more than trickery, which robbed the story of most of its creepy atmosphere. And is not very Carr-like.

On the other hand, the method of drowning in a locked, bone-dry room and how the murderer left it behind was an inspired piece of plotting. The kind of thing you would expect from a Japanese shin honkaku mystery writer with the clue of the spilled nail police being a clever touch to the drowning and locked room setup. There's another, more technical aspect to the murder, which demonstrated Golden Age mystery writers were very up-to-date on anything that could aid them in a juicy murder. Although it's a little weird to see a modern associated word like (ROT13) rnecubarf used in a 1931 mystery novel. I entirely agree with John Norris' 2011 review that the staged séance counts as "one of the best confession by entrapment scenes in a Golden Age novel." A great and very well handled ending to a regrettably uneven, but overall enjoyable, detective novel.

So all of this makes it troublesome to recommend Mystery at Friar's Pardon as a companion to Carr, Roscoe, Smith and Talbot, which is what most (locked room) readers aware of the book hope to find. I don't expect my review will do anything to fine-tune everyone's expectations, but advise you to expect something more in line with Herbert Brean, George Limnelius or one of Paul Halter's second-tier mysteries. You'll enjoy and appreciate it more that way.