"I met murder on the way -
He had a mask like Castlereagh -
Very smooth he looked, yet grim;
Seven blood-hounds followed him—"
- Masque of Anarchy

In the introductory chapters of Locked Room Murders and Other Impossible Crimes (1991), Robert Adey compiled a comprehensive summary of this particular sub-genre and underlines notable works from established novelists and writers whose names have dimmed in our collective recollection. One of these unnoticed, fleeting shadows from the past, whose career lays in the same negligent state as that of the crumbled remnants of a headstone, is a "seasoned wanderer" named Theodore Roscoe – who wrote part of his masterpiece, Murder on the Way! (1935), on a candle-lit cemetery near Leogane! If that doesn't set the mood, nothing does. 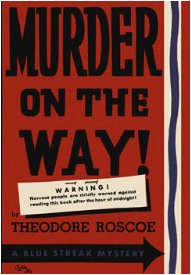 This barbarous and grotesque narrative embarks on its grim journey when the two main protagonists, artist Edwin Cartershall, who also narrates the story, and his fiancé-to-be, Patricia "Pete" Dale, receive a late-night visitant, a character plucked from the fantasies of Lewis Carroll, named Maître Pierre Valentin Bonjean Tousellines – who contented himself with the title of Comte de Limonade. Tousellines introduces himself as the solicitor of Pete's uncle, Eli Proudfoot, recently departed from this world, and invites them to tail him back to the decaying chateau of his late employer, situated in Morne Noir, Haiti, for the final rites and the reading of his will.
Uncle Eli shuffled off his mortal coil in the confines of his moldering library, where his remains were found slumped in an armchair with a bullet hole defacing his visage, and the local authority, represented here in the presence of Lieutenant Nemo Narcisse, of the Garde d'Haiti, presumes that the man robbed himself of his own life. However, the absence of a gun also leaves him with the option of murder, but only seems to have considered this possibility with the scourge of the local inhabitants firmly set in his mind – the voodoo-driven zombies of Haitian legend!
You have to keep in mind that this book predates most, if not all, of those bad, cheesy low-budget horror flicks and the zombies that reputedly stumble around in this book are lifted from folklore instead of Hollywood. Tousellines provides Cartershall and Pete with the following description of Narcisse's first suspect:

"A zombie, m'sieu, a zombie is one who has died but is not yet dead. A corpse resurrected by witch’s doctors magic from the grave. A living dead man who returns as the slave of some master, who may labor in the field or walk with silent steps on errands of revenge."

But the scenes awaiting them at the dilapidated, colonial chateau, where the rhythmic rumbling of ceremonial drumming, emanating from the wilds encompassing the estate, never ceases, can be best described as the drug-fuelled phantasmagorias of an opium addict. There's the unconventional funeral of Uncle Edi, prepared for burial according to Haitian voodoo rituals, and the reading of a will – which turns all of his prospective heirs into pawns in a game with a one hundred thousand dollar inheritance as the big prize.
The assortment of potential heirs, aside from Dale and her artistically inclined friend, could've been escapees of a freak show, especially when hurdled together in one room, and between them there are enough murders to furnish a new wing for the black museum. These seven blood hounds that follow murder in his footsteps are a British peer who has done a twenty-year stretch for murder, a tattooed deserter from the United States Navy, a Dominican with bloody hands and no tongue, an Albino youth with an attitude, a one-armed Jamaican witch and her half-wit son named Toadstool and an exiled German bluebeard who was an embarrassment to the home front. The only thing they have to do in order to procure the inheritance is simply staying at the chateau for twenty-four hours after the funeral and they can ascent the list if the person ahead of them in the line of successors leaves or croaks! Murders, resurrections, impossible disappearances, rebel uprisings and hair-raising situations tag each other in and out at a frightening and dazzling pace.
Murder on the Way! clues us in on what And Then There Were None (1939) would've been like if the names of John Dickson Carr or Hake Talbot were plastered across its front cover. Theodore Roscoe does not only share their taste for Grand Guignol, but also their gift for conjuring up an apparently demon haunted world where everything is possible – even the impossible!
At one point in the story, the second heir in line, the tongue-less Ti Pedro, is locked into the room where Uncle Eli used to store his rosewood coffin and that storage room pretty much amounts to a plastered and sealed room – without any easy entrances or escape routes. The door was locked from the outside, with the solitary key in constant possession of a police officer, while an interconnecting door was nailed shut and the only window was covered with undisturbed cobwebs, but despite these obstacles someone managed to shoot him through the top of his head. Later on, the shadowy murderer vanishes from a dead-end point in a subterranean tunnel and Roscoe explains these miracles of black magic away with the same ease as the sun shoos away the stars at dawn. The only thing that marred the pleasure for this reader was my own cleverness at picking up on nearly all the clues that helped me identify the murderer earlier on in the story, but what an enterprising and spirited murderer with a truly original scheme that anticipates a rather famous cartoon series.
This is nothing short of a bloody tour-de-force and an unapologetic flight of fancy, which does a breath taking job at merging the plot of a fair play mystery with components of thrilling tales of adventure and making it feel like a horror story. Readers who prefer their detective stories with an air of literacy are best advice to stay out of its way. This is genre fiction in its purest, undistilled form and only recommended to habitual users.
On a final note, according to short autobiography in this book, Roscoe was also the author of a detective story that just might be the scarcest title in all of mystery fiction:

"At the age of eight, he was the author of a thrilling mystery, 'The Sheriff of Red Roach Ranch,' published in a hand-bound edition limited to one copy."

I can only imagine the number on the price tag of that book, if it ever appeared on the second-hand book market.
Geplaatst door TomCat on 1/17/2012