"A theater can be a dangerous place, like all places where crowds of people gather."
- Karen Gregg (The Gold Gamble, 1989)

The plot of The Gold Gamble (1989), contrived by that architect of crime, Herbert Resnicow, has a poetic structure – since it's the farewell performance of his golden pair, Alexander and Norma Gold. It's hard to gauge, though, if these final acts were penned with their retirement in mind or whether his commitment to other projects prevented him from returning to them, before his death in 1997, which is not an unlikely scenario, as the 1990s saw him outsourcing his talents to abet the likes of Pelé and Edward I. Koch with their literary aspirations, but on the other hand, the story does read like a best-off compilation of their previous investigations – and they seem to have full-filled nearly everything they set out to do in their first outing. 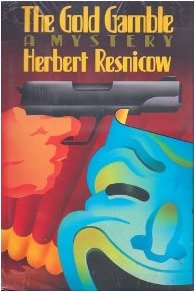