"Philip Linton, whose testimony had helped convict nineteen murderers, died in the belief that the mute testimony on the floor beside him would help convict a twentieth. He was a good cop to the very end."
- David Alexander's Murder Points a Finger, 1953.

The name Ellery Queen has always been synonymous with The Dying Message, permanent associates like John Dickson Carr and The Locked Room Mystery and Agatha Christie and The Closed Circle of Suspects, but this liaison never produced a work that became the flagship for that particular brand of detective fiction – unlike The Hollow Man (1935) and The Murder on the Orient Express (1934).
You could argue on behalf of The Tragedy of X (1932), introducing the Queenian motif of the dying message, but the moribund clue didn't turn up until the final quarter of the book and it's not one that has aged well. Its interpretation relies on a nugget of trivial, everyday knowledge that the passage of time relegated to the dustbin of history and not something contemporary readers should be expected to know. So Ellery Queen's close association with The Dying Message seems to have more to do with their prolific output than that one of their stories became a textbook example of the form. 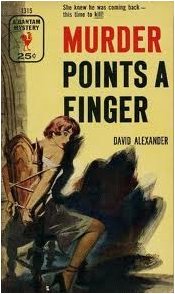 This is not a putdown of Ellery Queen, but after I had finished reading David Alexander's Murder Points a Finger (1953) I was seized by the realization that it was, perhaps, the first detective novel I read that was as exemplary for The Dying Message as Dashiell Hammett's The Maltese Falcon (1930) was for The Private Eye and Isaac Asimov's The Caves of Steel (1954) for The Hybrid Mystery.
Murder Points a Finger sets about when the hour-glass of a former police lieutenant, Philip Linton, only has a few grains of sand left in it and murder is accompanying him on the way home. Linton was a much-lauded expert on fingerprints and had spend the bulk of his years on the force in the identification department, where his expertise on the esoteric patterns of whorls, arches and loops helped secure convictions for nineteen murderers – and his cryptic dying message may put away another one.
Not long after returning home, the murderer forces an entrance and fires a bullet from a forty-five in Linton's belly before taking off again. The dying detective is painfully aware that he has precious few minutes left and takes what is closes at hand, a set of fingerprint cards, to spell out the name of his assailant and dies assured that his friend, Dabney Ashton, will figure it out. Of course, you have to accept the premise that the murderer is satisfied with the belly shot and immediately leaves without making sure that Linton is dead and unable to call for help – or leave an incriminating message. Anyway...
Philip Linton's friend, Dabney Ashton, is a distinguished theatrical performer with one or two television parts to his credit, an accomplished chess player and a ex-special agent who decoded enemy messages during The Great War, but this does not make him the perceptive debonair amateur sleuth – who picks up on all the subtle hints that the police missed. On the contrary, he's quite inept when it comes to police work, despite his knack for puzzles, and a burden on the investigating officers. Ashton is unable to correctly translate his friends dying clue, which, almost immediately, results in the police going for the simplest answer and swear out an arrest warrant against Linton's foster son, Abner Ellison. Meanwhile, everyone is on the lookout for Linton's granddaughter, Pat, who was kidnapped after she went out to dinner with her fiancé, policeman Allan Walters, on the night of her grandfathers murder and Ashton's meddling could very well have been the driving motive behind a second murder.
Needless to say, as the investigation drags on without the desired results, Ashton begins to feel that he has let everyone around him down and this provides the story with a realistic view on the infallible storybook detective, but, at the same time, it also fully embraces some of the more bizarre features that can be found in the works of members from the Van Dine-Queen School. In the background of the story, the sentry towers and battlements of Mad Hatters Castle, erected by an Albanian who amassed a fortune with cheap, knock-off hats that were copied from more expensive models, casts dark shadows over the events and inspiration for the solution is found in an old speakeasy, "Gypsy's Cosmic Tea Room," that went on after the prohibition era ended – and provides a dwelling for some of the cities most eccentric drinkers. This makes the story read, at times, like one of those half-conscious, lucid dreams in which imagination and reality merge together effortlessly and this partly prompted me into placing an order for another one of his books. But more on that when it arrives here in a few weeks time.
The solution is not a disappointing one, however, it won't kick you in the teeth and leave you stupefied, either, as any seasoned reader of detective stories will probably catch up with the murderer before arriving at the halfway mark of the book – even if you fail, like yours truly, to decipher the clever, but ultimately, simple dying message. But the predictability of the murderers identity does very little damage to the overall quality of the story, at least, there were not any serious scratches on the reading pleasure that I derived from this book.
On a whole, a very satisfying, if a somewhat unusual, detective story that ranks alongside Theodore Roscoe's Murder on the Way! (1935) and Pat McGerr's The Seven Deadly Sisters (1948) as the best mysteries I have read this month – and with that we've come full-circle! The three best detectives I devoured in the first month of this year are all exemplary stories for The Locked Room Mystery, Closed Circle of Suspects and The Dying Message as well as representing three succeeding decades.
Geplaatst door TomCat on 1/29/2012