"When the mainsail's set and the anchor's weighed
There's no turning back from any course that's laid
And when greed and villainy sail the sea,
You can bet your boots there'll be treachery."
- Shiver My Timbers (Muppet Treasure Island, 1996).

Well, this pass week, which was, to say the least, draining, did not left me with a lot of moments needed to read through Darwin and Hildegarde Teilhet's The Feather Cloak Murders (1936) at my usual pace, but I persevered and managed to squeeze this review out before the official kick-off of the weekend! 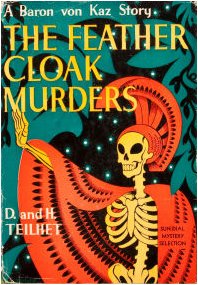 After his first adventure in the "barbaric Northern states" of America, recorded in The Ticking Terror Murders (1935), the brave Baron von Kaz embarks on an impetuous detour to his native Vienna – where he's expected to realign himself with the once trampled monarchists. But the Baron is drenched in thoughts of Caryl Miquet, a mere plebeian who played on the heartstrings of the exiled aristocrat, and when a certain Mr. Hiroshita offers him a $1000 fee to accompany him on his voyage aboard on ocean liner bound for Honolulu, Hawaii, which also has Caryl Miquet's name on its passenger list, the plan to help an emperor climb back on the throne of Austria is bumped down a few places on his lists of priorities.
At first, Von Kaz assumes that he's simply escorting a wealthy importer in possession of an expensive piece of merchandise, a jade coin emblazoned with the image of a lion, but ends up spending the crossing confined to their cabins – drinking and playing cards. The reason for their seclusion is Carl Kohler, a Hawaiian from Germanic extraction, who's eager to speak with the importer privately. However, when the Baron stumbles across Kohler's body on a deserted section of the deck, a tufted and feathered steel dart, quietly discharged from the barrel of an air pistol, stuck in his chest, it becomes apparent that there's more at stake than just a decorated gobbet of jade – which his client confirms after docking in Honolulu.
However, the first hurdle presents itself when the Baron simply wants to report his discovery of the body to the proper authority, the ships captain, but finds a skeptic who knows that he spend a considerable stretch of the voyage intoxicated – and presumes that he stumbled out of his cabin in an alcohol fuelled trance and now imagines tripping over corpses, killers and air guns at every turn. It doesn't help, either, that the body has disappeared, probably chucked overboard, when they finally decide to take a peek and only two facts speak in favor of the Baron's story: the presence of blood on the scene and the fact that Mr. Hiroshita is also silenced with a dart from an air gun shortly after their arrival in Hawaii.
But before he was shot, Mr. Hiroshita told the Baron a fabulous tale of a map that marked the location of a lost Inca city in Mexico, buried with its treasures, and later he hears of a rare red diamond that any collector would empty his bank account for as well as stories of the titular feather cloak of Prince Puakini – one of the ancient chieftains of the island. The feathers for those cloaks were plucked from birds that are now extinct and assembling them took up to two generations, which resulted in only one set of cloaks every one hundred years and an original one would fetch a small fortune on the private market.
These stories give the place a touch of Robert Louis Stevenson's Treasure Island (1883), but, unfortunately, most of these treasured artifacts turn out to be McGuffin's that are disregarded and forgotten about when the final chapters come into view – and this gives the conclusion an incomplete feeling. Notwithstanding this deficiency, The Feather Cloak Murders does not end on an entirely unsatisfactory note, since most of the important plot threads are neatly tied up in the final chapters, but the solution wasn't as impressive as the setting that the Teilhet's so evocatively brought to life.
The Hawaiian islands, on which the Baron tramps about over the course of his investigation, almost became a character in themselves and function splendidly as a backdrop for this story – providing even an ancient and concealed lava tunnel for an exciting dénouement. I feel that the book, as a whole, and then in particular its somewhat fragmented plot, benefited from this evocative surrounding and the history that came with it. It's what made the story, for the most part anyway, stick together.
I also enjoyed the character of the brave Baron Franz Maximilian Karakôz von Kaz a lot more than I did in his previous outing, The Ticking Terror Murders, in which he struck me as a capricious assortment of oddities – even though he was at his best there when he was at his worst. But here he felt a lot more approachable and human, as he was not just occupied with breaking and entering or braining an innocent shopkeeper with his loaded green umbrella/sword stick, and showed more than one side of his personality – like his genuine infatuation with Caryl Miquet or how disturbed he was when her nephew was savaged with a spade by the murderer. What emerges is a far more believable character than merely a figure of fun that's only there for laughs and to provide a solution when the time has come to wrap things up.
While this was not one of the best detective stories I have read, The Feather Cloak Murders was still a very likable and pleasant companion that could not be accused of that one unpardonable sin: namely that of being dull. It's a story that's simply in motion and this makes it disappointing that the plot wasn't any better or that it didn't follow up on all of its tall tales of treasures and lost cities. There was something worthwhile buried in this narrative, but its authors failed to bring it completely to the surface of its pages.
The Case Book of the Brave Baron von Kaz:
The Ticking Terror Murders (1935)
The Feather Cloak Murders (1936)
The Crimson Hair Murders (1936)
The Broken Face Murders (1940)
Geplaatst door TomCat on 2/03/2012