As If By Magic

"...that crocodile would have had me before this, but by a lucky chance it swallowed a clock which goes tick tick inside it, and so before it can reach me I hear the tick and bolt."
- Captain Hook (Peter Pan, 1911).

In my previous review, I briefly touched upon the fact that neo-orthodox detective stories, all of a sudden, started to hog all of the limelight in this place for themselves – which can be simply put down as a pattern that emerges in ones reading habits without malice aforethought. It's like natural selection, but driven by an ego's futile attempts to steer and control its evolvement. This is why, for the time being, the current domineering species, such as Herbert Resnicow and Paul Doherty, will continue to detract from their forbearers. But rest assured, I will never list their predecessors as extinct and for today's review I will even highlight one of them. 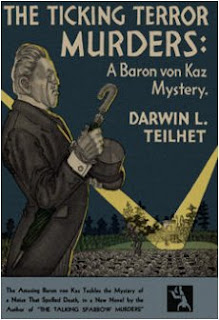 Darwin Teilhet's The Ticking Terror Murders (1935) added with Baron Franz Maximilian Karagôz von Kaz, an Austrian aristocrat in exile, another accumulation of oddities to a swelling crowd of eccentric detectives, but whereas Hercule Poirot and Henri Bencolin have a dash of continental quaintness the Baron is merely capricious – which sometimes borders on sheer malevolence. Admittedly, the Baron is at his best when he's at his worst behavior, like breaking and entering a premise for a private investigation or braining a shopkeeper with his trusty green umbrella in order to make a free phone call, but for the most time he's just an anomaly.
As I mentioned in the paragraph above, Baron von Kaz is a member of the Austrian nobility who was forced to escape his native stomping ground after a botched political plot to restore the monarch and fled to the land of opportunities to set-up as a consulting detective – and his first client is brought to him to by an American woman he met and helped before back in Vienna.
Lucille Tarn made a name as an actress before wedding herself to a rising political star, but recently she found herself having an extramarital affair with a famous screenwriter, Henry Kerby, who's being haunted after dark by inexplicable and indeterminable ticking noises. Kerby suspects that Lucille's husband, Charles Tarn, became wise of their affair and is extracting revenge with these subtle, but disturbing, night-time noises. However, the Baron believes there's something more to these tickings than reaches the ears and convinces the Hollywood scenarist to retain him to identify its source. But before he can unsnarl this problem another one presents itself: Lucille Tarn is murdered as if by magic!
While attending a performance of Dacrokoff, a celebrated magician, Lucille Tarn is asked to take place in a cabinet to make her disappear, which is exactly what happens, but when her form reappears she's sprawled on the bottom of the contraption with a poisoned hatpin protruding from her chest. The arrangement and execution of the locked cabinet trick turned out to be as clever as it's simple, but I think Teilhet's sleigh of hand made a slip when he divulged the solution at 1/3 of the book.

Technically, it's understandably why the solution had to be thrown out at that point in the book, but it would've benefited the overarching story if more had been done with it or at least procured a better spot between its covers – such as the middle portion of the book. But I have to praise the inclusion of three, highly detailed diagrams depicting every step necessary to conjure up a deceptive image that instilled the audience with the false notion of having just witnessed a murder that should not have been possible – even though it's not a complex trick that can only be comprehended with visual aids.
Plot-wise, there's a drop-off in quality after Baron von Kaz solves the mystery encompassing the magician's cabinet and unmasks an accomplice – who's promptly disposed off under circumstances that simply begged for another locked room mystery. The rest of book seems, for the most part, dedicated to filling up time with mad cows, nocturnal adventures and a kidnapping of sorts, before reaching the simple and inevitable conclusion – in spite of the fact that there were still clues to be picked up along the way.
I'm afraid that the negative underpinning of this review hasn't given a too favorable impression of this book, but let me assure you that overall I found it a very enjoyable read. As a detective story, it's just very uneven in quality which failed to deliver the goods in the end. Nonetheless, despite a faulty structure it's still worth a read – especially if you're an enthusiast of impossible crime stories.
And thus ends this slovenly scribbled critique of The Ticking Terror Murders and was planning to announce here that, whenever time would permit me, I would take another look at Herbert Resnicow. But I came across something interesting and obscure that will require my attention first. It involves a dead mystery writer and a locked room.
The Baron von Kaz series:
The Ticking Terror Murders (1935)
The Crimson Hair Murders (1936)
The Feather Cloak Murders (1937)
The Broken Face Murders (1940)
Geplaatst door TomCat on 10/11/2011