Along Came a Spider

"The cautious murderer, in his anxiety to make himself secure, does too much; and it is this excess of precaution that leads to detection. It happens constantly; indeed I may say that it always happens -- in those murders that are detected; of those that are not, we say nothing..."
- Dr. John Thorndyke (The Eye of Osiris, 1912).

According to the unwritten policy of this place, I should refrain from posting a succession of book reviews that riffles through the work of one particular author, but then again, nothing was really etched in stone – giving me leeway to indulge in a reading spree targeting the detective novels penned by Anthony Gilbert.
Anthony Gilbert was the masculine nom-de-plume of Lucy Malleson, a novelist with close to a hundred books to her credit, from mysteries to straight fiction, and part of the second wave of members to join the prestigious Detection Club, who nevertheless found herself consigned to biblioblivion. As far as I am able to determine, her stories have been out-of-print for decades and she's rarely referred to in the literature – most notably, perhaps, in recent publications. I think there are two, very common, reasons to explain this neglect of once popular mystery writers: a gross misconception of the genre or simple ignorance. 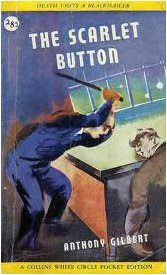 In case of the former, a writer is condemned to languish in obscurity as a punishment for something that is branded as a mortal sin in the eyes of the current establishment, such as a compulsive worship of the upper-class that mirrors their own preoccupation with the lower classes or an overemphasis on plotting, which are not strikes that can be held against Gilbert.
The novels I have read, Something Nasty in the Woodshed (1942) and The Scarlet Button (1944), are not over plotted stories that dote on the upper classes – quite on the contrary! Money and a position in society are not the cloaked harbingers of a care free, prosperous life and even good people, such as the female protagonist from Something Nasty in the Woodshed, are not spared any hardships – in spite of a financial status. Not to mention the occasional, cynical observations on society that are stealthily dropped on the characters. There's also a willingness to experiment with the structure of the detective story, such as blending atmospheric suspense with police detection, which should speak to the interest of a contemporary reading audience.
So I think it's a safe, tentative conclusion that Anthony Gilbert was simply lost from popular view, after tripping over and slipping through the cracks of time, instead of being unjustly disregarded and scorned with malice aforethought – such as was the lot of John Rhode, Austin Freeman and Henry Wade. Ah, if only she had known that writing under a male pseudonym would proof to be a handicap in the 21st century.
Anyway, I have droned on long enough and it's time to take a look at The Scarlet Button, which is an interestingly constructed detective story as well as an exhibition of Gilbert's strengths and weaknesses that also gave acte de présence in the previous novel. 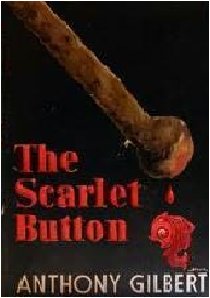 At the center of this carefully spun web of deceit, extortion and eventually murder sits James Chigwell, a master blackmailer in the tradition of Charles Augustus Milverton, who took a sadistic pleasure in taunting whoever he ensnarled in his web – and "clients" unwilling or simply incapable of playing along were faced with certain ruin and a trip down to grand central station to catch the final train of their lives. It was therefore only a matter of time before one of his regular contributors had enough and armed with a heavy walking stick young Kenneth "Ken" Jardine sets-out to squash the human spider, who fattened himself with the blood and misery of his clientele, but after sneaking into the abode of his tormenter he discovers that someone has beaten him to it – quite literarily!
Jardine escapes unscathed and unnoticed from the crime-scene without leaving traces of his presence, but still ends up in the docks facing a murder charge after courageously saving an innocent man from an uncomfortable fitting session with the hangman by divulging to the police that he was at the home of the now defunct spider not long after he was squashed – which proved that the hands of one Rupert Burk were unstained. But what he did was merely exchanging one equally innocent head for another to the public executioner and as a result one of his friends decides to consult a noted criminal-lawyer, Arthur Crook.
Arthur Crook is an amusing character, who's halfway between John J. Malone and Sir Henry Merrivale, with methods that are either somewhat questionable, highly unorthodox or downright amoral – which consists here of duplicity and supplying the murderer with enough rope to hang himself. In a way, this story can be read as a mockery of the assiduous, stereotypical storybook killer who only got caught because he had done too much, however, this is not a macabre send-up of the genre. It's a fairly dark story set against the blackouts of WWII and the brutal murder of Jardine's friend, a local working class girl, drives home the point that Gilbert was not an author of cozy mysteries.
The main problem and solution offered here are engaging and allowed for an interestingly constructed plot, but unable to fully deliver on its resolution due to a lack of an extended cast of viable suspects. This aspect of the solution could've been improved if simply more victims of Chigwell were introduced to do a danse macabre around his corpse and distract your attention away from the murderer. I actually dismissed this person out of hand (because it was too easy) and began to suspect a clever narrative device that would implicate an unknown X in a satisfactory manner – which made the actual solution a real letdown.
The Scarlet Button can be summed up as a nice try, in which the mismanagement of the central plot idea, which was not entirely without merit, crippled any chance it might have had at achieving some sort of status within the genre. However, don't assume that this is a thoroughly bad detective story, which is not the case as the build up to the solution was quite good, but the execution of the grand finale leaves a lot to be desired.
I hope that the next Arthur Crook novel will have a second-half that carries over the creative quality of the set-up, but first I will take a brief excursion into the dark middle ages of Paul Doherty's Hugh Corbett.
Geplaatst door TomCat on 10/31/2011