A Knife for a Knave

“Playing detective isn’t all fun. Somebody’s going to suffer. And it’ll be a nice somebody; all our prime suspects are good people and the victim was a bastard.”
- Lolly (Murder at City Hall, 1995)

Edward I. Koch is a former attorney at law and retired politician, who exchanged the court room for a seat in the United States House of Representatives, where he served as a Congressman from 1969 to 1977, and presided over New York City as its 105th mayor from 1978 to 1989 – and this last political tenure formed the basis for a handful of detective novels "penned" in collaboration with subsequently Herbert Resnicow and Wendy Corsi Staub.
In his foreword, Koch notes that he loves to write and "decided to create a fictional Ed Koch who could be mayor of New York forever in a series of mysteries" and that he "joined forces with Herb Resnicow, whose fertile mind can conjure up the plots of the criminals as mine moves to undercover those plots and catch the crooks." I found it hard to gauge how much ink Koch himself contributed to this novel, but the construction of the plot, as he pointed out himself, definitely bore a number of the architectural features that are telling of Resnicow's style and it wouldn't surprise me if he also did most, if not all, of the writing – as a literary subcontractor, of sorts, for the ex-mayor. But more on that later. 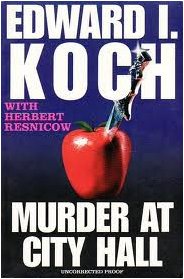 Murder at City Hall (1995) has Ed Koch exercising one of his mayoral authorities that is rarely, if ever, wielded by a governing head of a city: the authority to perform marriages. Koch has granted a friend permission to use City Hall chapel for her daughter's wedding and even consents to perform the ceremony himself, but as he legally ties the enamored couple together someone else is cutting the lifeline of Karl Krieg short – a dishonest and despised property developer. He was found in an alcove in the chapel, after most of the attendees where heading for the gala reception at the Plaza Hotel, stabbed to death with a homemade knife wrapped in a paper napkin that functioned as a makeshift handle.
The fact that the wedding chapel has one entrance, no windows and that nearly everyone who was in attendance had to pass through a metal detector makes it somewhat of a puzzle how the knife was brought into the chapel – unless it was carried inside by someone who didn't had to pass through the metal detector at all. And guess who that person was? The mayor himself! This leaves Koch in a tight situation, one that could cost him City Hall, and decides to take it upon himself to figure out the identity of the person responsible for the murder of one of his city's most hated citizens – which he does with the ardor of an enthusiastic amateur detective and with the helping hands of his friends.
Gumshoes who operate as an equal team, like the tandem of Mayor Koch and his friend Lolly in this novel, can be seen as a staple of Resnicow's detective fiction, although, I think he glutted on this when Koch's parents flew-in to help him solve this murder and save his job. But then again, this was probably done as a request from Koch as a surprise for his folks.
Anyway, there are also other aspects of the plot that are covered with Resnicow's fingerprints, such as the personality of the victim (who are seldom possessors of a sympathetic personality in his stories), the modus operandi (stabbing is his preferred method) and the comedy, but, unfortunately, it lacked one of his clever trademark solutions that would've explained the presence of the knife by exploiting the layout and architectural features of the chapel to by pass the metal detector. The actual solution was pretty mundane and uninspired, although, there was a somewhat clever, but false, solution proposed right before the real killer was unmasked and that makes me wonder if the final explanation was dreamed up by Koch and Resnicow included his own answer to the questions proposed in this book as a false solution – which showed more foresight and ingenuity than the one they eventually went for.
Before wrapping this review up, I have to make one more observation and that is how much Koch struck me as a P-G incarnation of Sir Henry Merrivale (including an associate nicknamed Lolly!) – bouncing snappy comments off his secretary and the press hounds. I have no idea how much this fictionalized Koch resembled the real man, but I love the idea that Koch came to Resnicow with a Carter Dickson novel and asked him if he could make him a bit like H.M. Hey, it would mean that he has taste.
All in all, this was a nice, lighthearted detective story from a mystery writer who revived the classic Golden Age Detective novel during the 1980s, but was, alas, unable to do that same trick in this story – which ranks a lot closer to Murder, She Wrote than any of the past masters he paid such a beautiful tribute to in the Gold and Bear series. It's still a nice read, but I think you have to be fan of Herbert Resnicow to really enjoy it.

By the way, does anyone want to hazard a guess how many times I wanted to type Edward D. Hoch instead of Edward I. Koch?