From the Files of All Souls

“All Souls Law Cooperative works like a medical plan. People who can’t afford the bloated fees many of my colleagues charge buy a membership, its costs based on a scale according to their incomes. The membership gives them access to consul and legal services all the way from small claims to the U.S. Supreme Court.”
- Ted Smalley (“The Last Open File,” from The McCone Files, 1995)

They say that behind every good man stands a strong woman, in which case Bill Pronzini can rest easy knowing that "the founding 'mother' of the contemporary female hardboiled private eye" has his back. Marcia Muller has written 29 novels and published two collections of short stories featuring her female private gumshoe, Sharon McCone, who shares her universe with her husbands "Nameless Detective." I realize that mentioning the fact that Muller took home a Private Eyes Writers of America Live Achievement Award should take priority over noting the fact that they occasionally pooled their series detectives, but I really, really love crossovers. I really do. 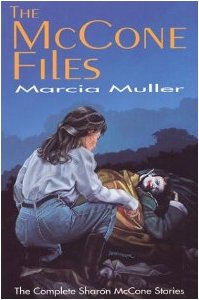