"Seeing a murder on television can help work off one's antagonisms. And if you haven't any antagonisms, the commercials will give you some."
- Alfred Hitchcock.

This place was put up to commemorate the erstwhile stories of the mystery genre, not to dump them in a shallow grave and shuffling some dirt on them to fill-up the hole, but after discussing several duds, one after another, it sure began to feel as if I was conducting a series of makeshift funerals – and understood that for the next review I had to clamber out of that bone-filled pit and scrawl a few celebratory lines on a winner. So I turned to the late William L. DeAndrea, who has yet to disappoint me, and, as expected, found myself in the middle of another praise worthy effort from his hands. 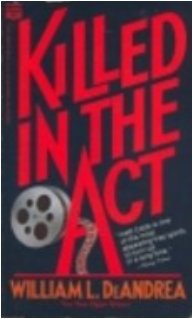 Killed in the Act (1981) has a plot revolving around the preparations and rehearsals for the 50th anniversary show, entitled "Sight, Sound & Celebration," of The Network and their celebratory television extravaganza is jam-packed with their biggest stars from past and present – including the reunion of Ken Shelby and Larry Green (a comedy/magic act not entirely dissimilar to Penn & Teller), Alice Brockway (a former on-air personality currently married to Shelby) and the Hollywood sex-bomb Melanie Marliss.
As the Vice-President of Special Projects, Matt Cobb has little to nothing to do with the hustle and bustle of their jubilee because his job description consists of keeping inconveniences of The Networks back and smothering problems before they are big enough to tarnish the stations reputations. Or at the very least, keep the damage to a minimum. But when someone steals Melanie Marliss' bowling ball (a famous prop from the series that turned her into a star) together with a stack of old kinescopes from the 1950s, the corporate trouble shooter has to get involved and everything gets progressively worse from there.
One of his friends at The Network, Jerry de Loon, got a whack on the head during the theft and seemed to have shrugged it off, but aftertelling his story to Cobb he dies as a result of complications and he was not the first corpse in this case – nor would he be the last. Before the Shelby party arrived in New York, they had to explain to the Los Angeles police department how a Pulitzer-prize winning journalist ended up floating facedown in their pool and this so-called Network Phantom seems to have it in for Shelby & Green.
After the parade of duds I struggled through, it was refreshing to read a novel from a mystery writer who was able to divide his attention between a clever plot and interesting characters as well as topping it off with an exciting climax and surprise twist – which was also more than fairly clued. Heck, it was practically rubbed into the readers face, especially towards the end, but at that point in the story I had stopped being on the alert for the presence of any possible clues because I assumed the story had come to an end by then and only thing left was a proper rundown of the events. Well, he did and more and as a result he put one over me in spite of having solved the case, which made closing this book a lot more satisfying than any of the other books reviewed on here for nearly a month.
I have to keep this review brief (you know that stuff we call time?), but I have to point out that William DeAndrea gave us a glance of how the modern GAD novel would have turned out if it had continued to evolve – instead of being ditched by publishers in favor of gritty crime stories. Everything is there: the narrative voice of the hardboiled genre and the plot construction of the puzzle-orientated detective stories, but the characterization and his style were very up-to-date and that mixture made his stories more than just mere throwbacks – and the fascinating behind-the-scenes look at The Network only makes this series even more interesting.
As I have said before, DeAndrea not only picked up the threads of tradition but also weaved new patterns with them and this is one of his better works.
The Matt Cobb series: