"Hippocrates and criminals... in the annals of crime, they have filled many pages."
- DeKok (A.C. Baantjer's Murder by Installments, 1985)

Late last month, I replenished that indoors hillside, modestly referred to in this home as my to-be-read pile, with one or two additional purchases, mostly with familiar names plastered across their front covers, but one of them sported a name that I had never heard of before: Walker Taylor. Apparently, I was not alone because even the GADWiki drew a blank when I consulted it.
So I began interrogating one or two search engines and this turned up a capsule biography of Walker Taylor, whose full name was Philip Neville Walker Taylor, describing an eventful life that began when he ran away from home as a teenager to become a cowboy and later on a Hollywood extra – as well as squeezing a living out of his pen as an advertising agent, radio scenarist and novelist. These brief lines that summed up his life mentioned that he wrote an abundance of detective stories under numerous variations of his name, like the generically titled Murder in the Game Reserve (1938) and Murder in the Taj Mahal (1948) under the P. Walker Taylor byline, which were well received according to mystery scholar and fellow blogger, Curt Evans. 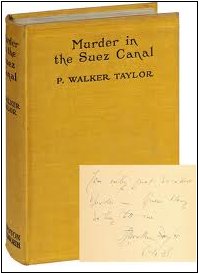 Murder in the Suez Canal (1937) is another one of his blandly designated mysteries, however, behind its austere title I found a well written novel with a genuinely intriguing premise and a plot that was not devoid of merit – even though the solution was more than just a bit under whelming. But more on that blemish later.
The story embarks with the Ecusia sailing into the proverbial troubled waters as one of its passengers, Archibald "Archie" Farrel, requires immediate surgery to fix a ruptured ulcer and Charles Wrekin, honorary Surgeon at St. Luke, converts the children's playroom into an operating-theatre – and assembles a team from scratch to provide him with the necessary assistance. You could argue that the operation was a success, but the patient never awoke from his anesthetic-induced slumber and the final diagnosis of his surgeon is "death under anesthetic," which is immediately repudiated by a member of his scratch team.
Dr. Clame, whose work, as a medical woman, consists mainly of vaccinating poor children in India against cholera and typhoid, maintains that the death of their patients rests not on her conscience and insinuates that Wrekin's probably covering up one of his own mistakes. The verbal affaire d'honneur  and medical discussion between the quarreling doctors is perhaps my favorite portion of the book.
But as a result of this blow-out, rumors begin to sweep the decks of the ship with swiftness of a tidal wave, which leaves the captain with no alternative but appointing two semi-official detectives to look into this suspicious death and the men he picks for the job are a Navy Commander, named Wraithlea, and a purple-faced magistrate from Calcutta named Judd – who greets cabin boys with a roaring flood of abuse in fluent Hindustani if they wake him before a quarter-past eight. I think this suggests family-ties to the Merrivales.
Anyway, the two men examine Archibald Farrel's entourage and sift through the events that made up the final days of his life, but they find that their location is preventing them from reaching the speedy conclusion that is desired. The local authorities of the region lack the technical expertise of institutions like Scotland Yard and the Sûreté, which forced Wraithlea and Judd to work with an incomplete toxicology report on a possible homicide without as much as a method to go on – and this gave the book a surprising touch of realism and shows how small our world has become in comparison to the 1930s. Relative distances were pretty much the same as absolute distances and in this "out-of-the-way" spot they had to be creative to overcome the hurdles placed in front of them, such as assembling a medical and investigative team from scratch. It's the lucky coincidence of the detective novels that people with a bit of experience in both fields were taking a trip aboard the Ecusia.
So what kept this book from a rank among the unjustly neglected masterpieces? Well, it has a mundane, unsatisfying and somewhat of a problematic conclusion that failed to live up to its intriguing premise and I think the motive was pulled from thin air. At least, I can't remember any hints that foreshadowed it. Anyhow, the scene of the successful operation in the children's playroom, which, nonetheless, ended with a white sheet being pulled over the patient's head, and the unknown cause of death coupled with the deceptive tranquility of the setting simply begged for something grand and ingenious. It's still a well-written novel that evocatively brings its environment alive and has one or two interesting characters trotting around its pages, but as a detective story this one fell short of the mark.
This is the third review in a row that ended on a disappointing note (a risk of randomly picking up unknown mystery writers) and therefore I will go with a guaranteed winner for my next read!
Geplaatst door TomCat on 3/15/2012