One Hell of a Job

"The surprises in life,
keep us on our toes.
Like a sock in the jaw.
Like a punch in the nose."
- The Tiger Prince (The Animaniacs).

During the past year and a half, I found myself gravitating towards neo-orthodox detective stories, cleverly constructed hardboiled narratives and other breeds of crime fiction I would've shunned, as if they were a stretch of quicksand, before I bumped into William DeAndrea – who kicked open my mind and haled it out of the pre-1960s period.
But more importantly than discovering genuine, fair-play detective stories in a familiar and contemporary setting, was, perhaps, learning how nonsensical labels, such as a "traditional whodunit" and "modern thriller," become when a talented and clued-up mystery writer takes the reigns. You can have a very modern crime novel with a social conscience and at the same time have it adhere to the basic requirements of a classically styled mystery: giving the story a plot that plays (reasonably) fair with its readers. I have discussed several of such works on here, but the one under examination today, Joe Gores' Dead Skip (1972), may be one of the best examples of the genres past catching up with the present. 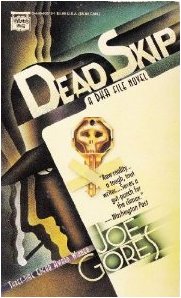 I first became aware of Joe Gores when Bill Pronzini commented on my less-than-enthusiastic review of Twospot (1978), in which he and Collin Wilcox had pooled their series detectives, "The Nameless Detective" and Lt. Frank Hastings, explaining that the book was suppose to be a three-way collaboration – until Gores backed out at the last moment and forced the remaining collaborators to rethink-and rework the entire story. As Pronzini said, "Neither of us was satisfied with the finished book. The original Threespot story should have made for a much more effective novel."
Normally, ruining what could've been an epic crossover, would have landed Gores a spot on my personal blacklist, but somehow I was intrigued and the concourse of noted mystery critics who sang his praise was impressive to say the least. Ellery Queen provided him with a fantastic blurb for his books after stating that they were "as authentic as a fist in your face" and Allen J. Hubin said it was "a detective story close to the classic style, and a detective story of vigor and intelligence." As well as receiving kind words from Anthony Boucher.
My inquisitiveness was piqued, however, not enough to go out of my way to get a copy of one of his books in my hands, but when I was perusing the shelves of a secondhand book store, last week, I caught a glimpse of his name on a spine peeking from between a pile of thrillers – and after liberating it from its plight I was able to identify it was the first novel in the DKA series and had to fork over a mere two bucks to take it home with me. 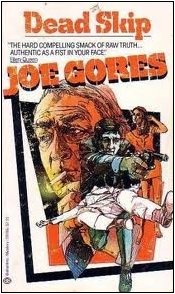 As mentioned above, Dead Skip introduces the genre to the men and women of DKA (Dan Kearney & Associates), a crew of private investigators specialized in car repossessions (i.e. repo men) as well as tracing bail skippers and other dead beats, and have seen them being compared to Ed McBain's 87th Street Precinct novels and labeled as hardboiled procedurals – a sub-genre he may very well have invented.
The plot of Dead Skip spins mainly around three of its members: Dan Kearney, Larry Ballard and Bart Heslip. Kearney is a veteran in the field and founder of the agency, who gives the brash young Ballard three days to proof that his friend and fellow field operative, Bart Heslip, was attacked before he was stuffed in the front seat of a repossessed car and pushed over the edge of Twin Peaks – driving its unconscious chauffeur straight into a deep coma.
Kearney appears skeptical to Ballard's suspicions, but in reality, he shares his conviction that someone tried to murder Heslip and gives to one of his ops, Gisele Marc, a rundown of his deductions, as a true armchair detective, after letting the eager gumshoe loose on the criminal elements of the city. You can hardly mistake this series for a throwback to the traditional whodunit, but the plot unravels itself as such and there's more than enough detection to keep every smug classicist, who fancies himself as an amateur Philo Vance, occupied until the final chapter. Gores neatly summed up their approach to crime in a few lines.

“Damned tough to stay out of the way of an agency like DKA if they really wanted you. You had to change your name, dye your hair, keep your kids out of school, quit your union or your profession, tear up your credit cards, abandon your wife, not show up at your mother’s funeral, run your car into a deep river, quit paying taxes, get off welfare. Because every habit pattern was a doorway into your life, a doorway that skip-tracers and field agents with the right key could open. The right clue, he supposed, in the detective-story sense.”

The fact that Gores, like one of his heroes, Dashiell Hammett, had first hand experience in the field lends a touch of authenticity to their proceedings, but for all its leaning on investigative procedurals and old-fashioned detective work this was still a very modern and hardboiled novel. The crimes they encounter are those you expect to find on those mean streets and the multi-ethnic cast of characters, fixed and one-offs, reflects today's society and their creator understood, like some of his contemporaries discussed on here, that using up three-quarters of your book to establish one or more characters is a bit excessive.
Instead, we get quick, but convincing, snapshots of the people Ballard comes across as he proceeds through the pile of case files that Heslip left on his desk and he even meets the master thief Parker along the way – the anti-hero from the novel Donald Westlake penned under the alias Richard Stark. This crossover-chapter is also included in the Parker novel Plunder Squad (1973). Coincidently, fellow blogger Patrick is on a Westlake reading binge and has reviewed several of his novels – including two featuring Parker.
Dead Skip also honored a fine-old hardboiled custom when the murderer greeted Ballard with the warm kindness that only a loaded gun can provide, but how he's saved from that tight situation was less typical and put a smile on my face. It's always reassuring to see that an author is not above a wink at the field he's working in. The explanation was also good and the clueing reasonable fair, which left a thoroughly satisfied reader in its wake and the only annoyances were the many typos in my edition (e.g. care and skill instead of car and skull), but not nearly enough to spoil an excellent read.
The DKA series:
Dead Skip (1972)
Final Notice (1973)
Gone, No Forwarding (1978)
32 Cadillacs (1992)
Contract: Null and Void (1996)
Stakeout on Page Street (2000; short story collection)
Cons, Scams and Grifts (2001)
Geplaatst door TomCat on 3/27/2012