Not All That Glitters is Gold

"So many out-of-the-way things had happened lately, that Alice begun to think that very few things indeed were really impossible."
- Lewis Carroll’s Alice's Adventures in Wonderland (1865).

I always put in an effort to compose a preface for the reviews published here, because I prefer a quick warm up to jumping in cold, but the problem with critiquing out-of-print and un-heard of detective stories is that, once in a while, you come across a writer whose name is completely encrusted with the stains of time – making it somewhat of a trial to find info to write a proper introduction.

Joseph Bowen is one of those unremembered names whose memory has been slowly obnubilated with grime and dust, as one decade succeeded another, and the only part of the man's legacy that is still legible is his name on the cover of The Man Without a Head (1933). Its story takes place in the sleepy village of Taos, situated in New Mexico, where a local boy, named Manuel Cortina, who holds the position of deputy sheriff, is confronted with a brutal murder by decapitation in the sealed and dilapidated home of one of the towns most eccentric citizens. 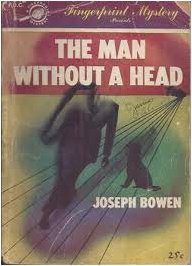 The ill-starred, but necessary, victim in this yarn is Edward Ponsonby, who, in a far and forgotten past, was one of the more important men in the region and entertained well-positioned individuals at his home, but, as the years brought the unwelcome comforts of a coffin closer, the man and his house fell into decline. Ponsonby's weakened position within the community also made way for rumors and the most persistent one is that he has a hoard of stolen gold stashed away, somewhere in his crumbled down abode, but his own behavior also fans the fires of town gossip as he's involved with two of the local women – one of them a bootlegger and the other married with a second lover on the side.

Suspects aplenty, you would say, when the deputy sheriff of Taos, who's holding the fort in absence of the sheriff, finds himself confronted with not only the decapitated and mutilated remains of Ponsonby, but also with the problem of how the murderer gained access and fled the scene of the crime with a door that was locked from the inside and windows that were covered with undisturbed cobwebs – not to mention the fact that a half-savage guard dog roams freely about the premise. Unfortunately, after this tantalizing problem is set-up, it begins to deteriorate until it resembles the crumbling, ramshackle home of the victim.

Bowen gently picks up the entire premise he had set-up over the course of fifty pages and discourteously dumps it in the trashcan, when, shortly after the reader has passed the halfway mark, Manuel Cortina receives a note from his colleagues that tied the fingerprints on the blood-spattered axe to Thomas Jenkins – one of the four miners left alive who reputedly brought their stolen gold to Ponsonby. You see, rumor has it that he betrayed them, even sullied his hands with blood, in order to keep all that gold and pitted the four men against one another and this ended with a prolonged jail sentence for Jenkins.

Of course, this clumsy attempt at hoodwinking the reader has given the entire game away and even a novice can make an educated guess at what really happened.

SPOILER (select to read): the plot of this book basically rips-off and sews together the solutions of Conan Doyle's The Sign of Four (1890) and The Valley of Fear (1914), which Bowen, perhaps subconsciously, confirmed when he referenced Sherlock Holmes towards the end. No other fictional detective is mentioned, except for the maverick detective.

Admittedly, I was expecting a surprise like that from the outset, but the manner in which Bowen approached the plot, and bungled it, just screams sheer incompetence and this only got worst when he decided it was finally time to let the reader in on the secret of the tightly locked front door of the murder house. One of the few good parts in this book were the descriptions of the rundown house that was completely inaccessible from the outside, but this only made it more of a let down when Cortina came up with an uninspired, run-of-the-mill solution and not a very original one at that! If you're a writer and you want to insert a locked room in your mystery, but insist on explaining it away with a routine method, at least give it a novel twist (c.f. Anthony Boucher's The Case of the Solid Key, 1941).

As a reviewer who loves detective stories, I always try to accentuate one or more positive attributes of a bad or average mystery novel, be it a cast of well-drawn characters or a clever locked room trick, but I can't think of a single really good thing in this case – and this also put an emphasis on all of its short comings such as the unconvincing characters and setting (with exception of the house, but we only get a good look at it at the beginning of the story).

Well, now that I think of it, there's one positive thing I should mention and that is that Joseph Bowen, in spite of all his bungling and short comings, had his heart in the right place. I think he genuinely wanted to write a baffling detective story in which the sleuth shares all his clues with the reader, as they close-in on the truth with each passing chapter, but, in the end, his best was simply not good enough.

So no recommendations this time, I'm afraid.
Geplaatst door TomCat on 3/03/2012