Murder in Any Language

"It's an imperfect world; always will be, as long as human beings are around. And only a fool thinks there's such a thing as a perfect crime."
- Gil Grissom (Max Allan Collin's The Killing Game, 2005)

The Boekenweek (book week), held each year in March, ever since its inception in 1932, is an annual "week" of ten days that is dedicated to Dutch literature. A well-known writer, who earned his or her place on the printed page, usually Dutch or Flemish, is asked to write a book, as a rule these are novella-length stories, that is presented as a Boekenweekgeschenk (book week gift) to everyone who purchases a book or becomes a member of a library – and in 1973 this honor was bestowed on Bertus Aafjes.
Bertus Aafjes (1914-1993) was a famed poet, novelist and world traveler, but, thanks to that peculiar sense known as hobby deformation, I always associate him with a wonderful series of historical mysteries featuring the venerable and sapient Judge Ooka – an 18th century magistrate who presided over Edo. 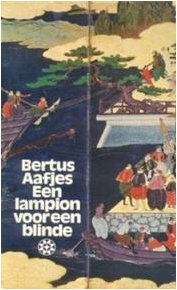 Before Aafjes sat down to write the book week gift, he had produced four volumes of Judge Ooka stories and was now commissioned to pen a fifth, however, there was one stipulation: it had to be adaptable for television. This left the poet of crime in somewhat of a quandary, since there were few Asian actors in the Netherlands at the time and therefore the focus of the story had to be somehow on his compatriots. Luckily, there was a stretch of time in Japanese history, known as Rangaku (Dutch learning), when the borders were as tightly closed as the door to Dr. Grimaud's study and the only Europeans who were allowed passage were Dutch traders. During those years, the Dutch enclave of Dejima was there umbilical cord to the outside world and through this contact they kept taps on the Western progress in science and technology – as well as art and literature.
Well, that takes care of one problem and resulted in Een lampion voor een blinde (A Lantern for the Blind, 1973), in which Judge Ooka is en route to Dejima to escort an envoy, De Hofstoet, from the Dutch enclave back to Edo – where they will give their homage to the Shogun. Judge Ooka is a student of Rangaku and this enabled him to communicate with the people in charge of the Dutch factory, however, his studies were not enough to fully prepare him for this meeting. Big portions of the first half of this novella concern themselves with contrasting Dutch with Japanese culture and they are engrossing if you enjoy history, but this is, after all, a detective story and soon the first problem arrives at the horizon – and it's not Commadore Perry's ship.
The last ship that arrived from Amsterdam, De Liefde, brought two heelmeesters (surgeons), the experienced Bading and the young Oranje, and one of them will be appointed as surgeon in Japan – while the other will be shipped off to a settlement in Siam. However, they both want to stay in Japan and each claimed that the other stole a letter, during their voyage, which confirmed their position as surgeon on Dejima and destroyed it. This makes it impossible to establish who's telling the truth and the decision is now up to the Opperhoofd, Captain Simon Slingeland, nicknamed The Red Oni from Holland, when they reach Edo, but the silent rivalry between the surgeons has set the tone for their journey – and during one of their first dinners Ooka makes a terrible mistake that will result in the death of one of them.
One night, Ooka tells them how he hanged two murderers on the eye-witness testimony of a blind woman and this immediately prompted an observation from the surgeons how they could've committed the perfect murder – if only they had known that the woman was blind. The judge realizes that he has made a horrible mistake, but is unable to prevent a murder. Nevertheless, when it happens even he's surprised at the devilish ingenuity on the part of the killer. It's not Oranje or Bading who was felled with a bullet, but the Opperhoofd, Slingeland, and Bading accuse Oranje of the foul deed backed up with the testimony of a blind maid.
The girl was unable to understand what was said before the shot was fired, since they spoke Dutch, but she recognized the voice and mannerism of Oranje. You can probably guess what scheme Bading had in mind, but the best part is that nobody was really fooled and knew, or suspects, what really happened. But it's impossible to proof. The perfect crime! And the only disappointing part of the story is, perhaps, that Ooka resorted to a bluff to ensnarl the murderer instead of hatching one his Machiavellian traps, but let's not split hairs over a minor imperfection in an otherwise engrossing and charming story.
Een lampion voor een blinde is not only one of my favorite Dutch detective stories, but also one of the best inverted mysteries, set during a very interesting period in history, I read and deserves to be translated – along side all those wonderful short stories.
This is the second book reviewed for the 2012 Vintage Mystery Challenge: Dutch Delinquencies:
My VMC2012 list:
Een lampion voor een blinde (A Lantern for the Blind, 1973) by Bertus Aafjes
De moord op Anna Bentveld (The Murder of Anna Bentveld, 1967) by Appie Baantjer
De onbekende medespeler (The Unknown Player, 1931) by Willy Corsari
Voetstappen op de trap (Footsteps on the Stairs, 1937) by Willy Corsari
Een linkerbeen gezocht (Wanted: A Left Leg, 1935) by F.R. Eckmar
Spoken te koop (Spooks for Sale, 1936) by F.R. Eckmar
Dood in schemer (Death at Twilight, 1954) by W.H. van Eemlandt
Fantoom in Foe-lai (The Chinese Gold Murders, 1959) by Robert van Gulik
Het mysterie van St. Eustache (The Mystery of St. Eustache, 1935) by Havank
Klavertje moord (Four-Leaf Murder, 1986) by Theo Joekes
Het geheim van de tempelruïne (The Secret of the Temple Ruins, 1946) by Boekan Saja
I also reviewed one of the short story collections in this series, which you can read here.
Geplaatst door TomCat on 2/09/2012