A Series of Unfortunate Events

When Curt Evans, under the moniker of The Passing Tramp, set off on his solitary expedition to roam the derelict legacies of the neglected mystery writer of the past one of the first dilapidated careers he wandered pass was that of J. Jefferson Farjeon – a copious writer from the Golden Era who fell by the wayside. I will refrain from summarizing his excellent introduction to Farjeon, but suffice to say, I felt compelled to check out these remnants for myself.

One title in particular caught my perusing eye, Holiday Express (1935), which Evans provided with this capsule synopsis:

“In this train mystery thriller the protagonist is a wonderfully-characterized child, an ingenuous young boy, and the book is written as if he himself had written it.”

“Holiday Express is really cute, by the way. It comes complete with misspellings! Farjeon does a brilliant job of assuming the mindset of his young protagonist.”

If you've been keeping tabs on this blog, you might have bumped into the high opinion I have of Gosho Aoyama’s Case Closed (a.k.a. Detective Conan) series or picked up a few lines from my soliloquy praising Craig Rice's Home Sweet Homicide (1944) in the comment sections, which makes it, hopefully, unnecessary to explain why this book ended up with a train ticket to my bookshelves as its final destination. 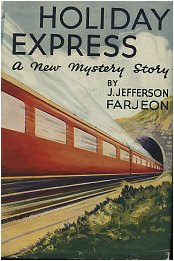 The Holiday Express, whose compartments are as jam-packed with gargoyles as the famed Orient Express that stranded in the pages of one of Agatha Christie's most famous whodunits, departs for Tom, a fair-haired boy no older than twelve, as the start of an uneventful seaside holiday with his parents and sister, but the characters he meets aboard the train toppled any plans he might have had for sand castles or reading the latest Edgar Wallace thriller after swimming. First of all, there's a girl, named Joan, whom Tom refers to in his narrative as The Love Interest, who seems to have garnered the unwanted attention of her strange assortment of fellow travelers – which comprises of a fat man, a guy with a scar across his face and a chap with a monkey.

Tom and Joan's adventure begins innocently enough, as the former tramps up and down the train, slipping in and out of compartments and bumping into the key players along the way, but when he tries to return a bag that Joan dropped on the platform it gets pinched from him and its rightful owner kidnapped! So what does a boy of barely twelve do in such a situation? Tell his parents or inform the ticket collector? Nope. Tom bails from a moving train into a dark tunnel and begins chasing the kidnappers with only his D.I. (Detective Instinct) to go on.

It would be criminal to spoil his experiences and endurances, as he treks through the countryside, but it's an exciting and wonderful journey fraught with dangers and peculiar characters as he's determined to save Joan from the clutches of her captors – and this makes for a captivating read. Yeah. That was a horrible, forced and cringe-worthy pun. My well-meant apologies.

Anyway, what really makes this book a fun read is not necessarily that it's a dangerous joyride, full of thrills and action, but the narrative voice of the young protagonist – which is not only cute, as Curt Evans mentioned, but engaging as well. Tom tells more than just his story; he involves the reader by talking directly to them and explains, for example, why he withheld certain information or events in order to enhance the dramatic effect of the story. You almost feel like Bastian who reads about Atreyu's journey in The Never-Ending Story (1979), except there aren't any Luck Dragons or Rock Eaters to be found roaming around the tracks of the Holiday Express.

When I picked up this book, I expected to find a predecessor of Eoin Colfer's Half-Moon Investigations (2006), but found, instead, something that amounts to a missing link to many of the detective stories, adventure yarns and cartoons with teenage protagonists that I enjoyed – or at least it felt like that to me.

I love Aoyama's Detective Conan, Colfer's Fletcher Moon, Stevenson's Treasure Island (1883), Rice's Home Sweet Homicide, The Real Adventures of Jonny Quest and Mitchell's The Rising of the Moon (1945) and this novel felt like the link that connected them all together. But then again, that may be a hallucinatory by effect from the nostalgia rush I had when reading this book and penning this review. Hey, I'm a suffering chronophobiac. These nostalgic mood swings can hit you like a sledgehammer!

All in all, Farjeon did an admirable job in capturing and assuming the mindset of his boy protagonist and marooning him on a world inhabited with trouble. The ensuing game of hide-and-seek between Tom and the gang will not fail to get your undivided attention from the moment the story departs until it comes to a stop at the final terminal. In short, this book is just fun.

This review and the one preceding it were rather short and compendious, but you can put that down to the whims of that tyrant on the wall known as a clock, however, I hope to babble on endlessly again in my next review. So let the reader be warned!
Geplaatst door TomCat on 2/16/2012