Now You See Him, Now You Don't

Appointment With the Hangman (1935), penned by T.C.H. Jacobs, a prolific British writer of tall tales of thrills and deductions, commences with a prologue, in which Michael O'Conner is sentenced to seven years of penal servitude for his share in the heist of a parcel of the finest diamonds that were ever delved out of the African mines – and their value is estimated at eight hundred thousand pounds. He was offered a reduced sentenced in exchange for the name of his partner in crime, but O'Connor has different plans in mind for the man who betrayed him and one of the police officers reflects that if he ever saw the inside of a prison again it was to keep an appointment with the hangman. 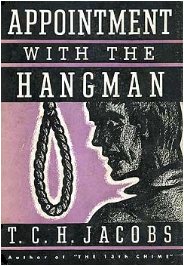 The locality for the first chapter changes from a gloomy prison cell to a Cornish hotel, situated at the seaward end of a cove, where the owner, David Lock, is an underling of Kaspar Khron – a theurgist who can perform supernatural feats such as traveling to the fourth dimension. When this part of the story opens up for business, the hotel begins to slowly fill itself with guests who want to attend one of Khrone's séances. There's a Miss Tingle, who's as devoted to Khrone as Lock, Jimmy Buller, an undercover journalist, Sir Manfred, a retired judge and believer in the occult, Reginald Ruffles, a hare-toothed young man who doesn't seem to be too bright, and Dr. Hamilton – who's a skeptic and determined to find a rational explanation for the miracles that he's about to witness.

This part of the story, counting a hundred pages or so, has the tendency to come off confusing and slightly erratic due to the introduction of the aforementioned characters – some of who turn out to play a role in two separate storylines involving the purloined stones and those who enwreathe the miracle worker. Sorry to say, this is also turned out to be the only interesting part of the book.

Jabocs captives his readers for a short duration with a slew of apparently supernatural phenomenon: Khrone's white Chinese cat, Chan, appears, for a brief moment, to be endowed with the ability to speak with a human tongue while his master levitates in front of an awestruck audience before slowly disintegrating in front of their eyes and eventually completely dissipates from a locked room. He also walks on air and subdues a malevolent elemental spirit. Unfortunately, these are mainly unconvincing, second-rate parlor tricks that you might expect from a third-rate conjurer who tries to impress a bunch of uninterested kids at a birthday party. The only exception is how Khrone disintegrated himself. That was actually a clever and original trick, but then again, every hack magician with some loose change in his pockets can purchase a good trick and I have nothing but scorn for the manner in which he explained the levitation part.

SPOILER (select text to reveal spoiler):  mirrors and wires were eliminated early on in the story, which left Jacobs limited imagination with only one option: Khrone actually levitated. Yup, everything else was fake except for the part he was unable to explain. Ugh. What a hack!

The Detection Club should've dispatched an envoy to his home to discuss that part of the solution with him, and with that I mean that Dorothy L. Sayers wags a disapproving finger at him while John Dickson Carr and John Rhode are smashing his typewriter to pieces.

Anyway, not much else of interest is happening at the hotel. O'Connor's storyline fizzles out after passing the halfway mark and the diamonds are relegated to the status of a McGuffin. There's also a poisoning plot hovering inconspicuously in the background, but nothing is done with that until its time to send some of the characters off to the gallows to meet their appointment with the hangman.


I have the feeling that Jacobs attempted with this novel to play the role of Victor Frankenstein. He cut and sewn together a number of different parts of the genre, hoping to create a monster of a mystery, but ended up with a hump of in-animated, decaying meat and shame should hang like a hangman's noose on him for submitting this botched experiment to his publisher. A very early contender for worst detective story read in 2012!

If you carefully read between the lines of this review, you'll notice a lack of enthusiasm for this novel and I was seriously tempted to turn this review into a mock guest post, in which I let Jafar, from Disney's Aladdin, review this book by posting a clip of him singing You're Only Second Rate. The lyrics really fit the theme of the book and perfectly sums up my opinion of it.

And once again, a dissapointing read has translated itself in a shoddily written review. Oh well. And let me know what you think of the increased font size!
Geplaatst door TomCat on 2/12/2012