"The world is full of obvious things which nobody by any chance ever observes."
- Sherlock Holmes (The Hound of the Baskervilles, 1902)

Glancing back at the previous reviews, penned in this series, I noticed that I prefaced each of them with a mournful remonstrance against the publishing schedule of Viz Media or lamenting the fact that older detective fans are finding it difficult to warm up to this splendid series – which is a repetitive cycle that needs to be broken. There's just one problem: the spark of inspiration was engaged elsewhere and left me here with nothing more than a vast expanse of blankness (i.e. nothing) to lead into the review. 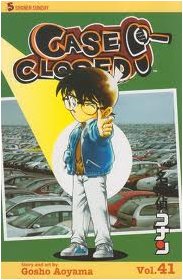 So this left me with only one recourse: shout outs! When you have finished reading my commentary on the stories collected in the forty-first volume of Case Closed/Detective Conan you might also want to check out The Study Lamp and The Ingenious Game of Murder.
Darrel, who also takes a look at little known mystery writers who were expunged from popular view, maintains the first blog and managed to dredge up a name, from the genre's murky past, that even John Norris and Curt Evans never met before – which is no mean feat! Arun is the game master of the other blog and the mysteries that wander into his crosshairs are of the short story variety. Short stories are often overlook, but on his blog they get an opportunity to bask in the same spotlight as their novel-length companions.
And now, on to the review!
Sidelined
This brand new volume opens with a story that picks up the thread that was dropped at the end of the previous collection, in which the famous Sleeping Moore flubbed a ten-million-yen case and burned through most of the dough before he had actually earned it – leaving him and his daughter in a world of trouble. Luckily, for them, his ex-wife, ace-attorney Eva Kaden, takes it upon herself to solve this case for them, but she has to compete with an old high-school alumni, Vivian Kudo, who also happened to be Conan's mom. Unfortunately, for the reader, they come across as a bunch of Mary Sues and the only surprising aspect of this story was how uninspired and unconvincing the plot was. A poor start of an otherwise interesting volume.
"Darkness there, and nothing more"
After the mess that Richard Moore left is cleaned up, Vivian Kudo decides to treat her son and the brats from the Junior Detective League on a special pre-screening of Samurai Kid II, but, once again, murder intervenes and leaves the pint-size detective with a baffling conundrum: how could a murderer silently navigate through a darkened and cluttered room? The solution is a variation on a timeworn trick, but it perfectly fits in with the background of the story and was well clued.
The Body in the Porsche
The police have closed off the Touto Department Store after the body of a murdered man was discovered, inside a parked Porsche, in the underground car park and Conan has to piece together this puzzle in order to lift the cordon. It's a tricky and a somewhat farfetched solution, but it shows that gimmicky tricks a la The Chinese Orange Mystery (1934) work a lot better in comic format than in prose. However, the main attraction of this story is the reemergence of the Black Organization, who seem to have been on their tails like a shadow from the start of this volume, and they may have finally stumbled to their secret!
This also sets-up the next story arc, in which Conan and Anita visit her sisters old residence, serving now as an illustrators studio, in order to retrieve a message she may have hidden there, but that is something that will be revealed in the next volume. Oh, but before they can pick up the hidden message they have to solve another murder case. One of the current residents, believe it or not, was poisoned around the same time those two dropped in on them.
All in all, this was a good volume, especially for fans of the ongoing storyline, involving the Men in Black, but Aoyama seemed a bit off with most of the stories here. The motives, for example, seemed as if they were introduced as an after thought and the tricks impressed me as complex for the sake of being complex – without even as much as a touch of his usual genius (his quality/output ratio is amazing). Only the excellent second story formed an exception to this pattern. It's still a decent volume for the fans, but not one that was a good as usual, however, every once in a while you come across a volume that performs a bit below par. Oh well, the main story in the next volume promises to be a blast (murder on a ghostship during a dress party)!
FYI, it's still my one-year anniversary in the blogosphere today and the next review will, hopefully, be up within the next few days and it probably won't surprise you if I tell you I will take a look at another impossible crime novel.
Geplaatst door TomCat on 2/19/2012