"It was now that the scene became suddenly of another world, a place of visions and chimeras, hideous because unexpected, terrifying because unexplained. Wide awake and in full possession of my faculties as I knew myself to be, I was at that moment the central figure of a nightmare."
- John Marriott (The Sleeping Bacchus, 1951).

Over the past few weeks, there have been brief periods of clarity in which I questioned the veracity of my hastily and overenthusiastically drawn decision that put a copy of Robert Adey's Locked Room Murders and Other Impossible Crimes (1991) in my covetous claws. It's tantamount to supplying an anxious pyromaniac with a box of matches, a can of lighter fluid and a derelict building to frolic around in and then act surprise when you notice the fiery tongues licking at its structure – after the first fire engines pulls up on the curb. Not to mention that this niche of the blogosphere has been doing an excellent job in itself, especially as of late, in forcing me to continuously rearrange my wish list. I mean, how can you ignore a review like this? 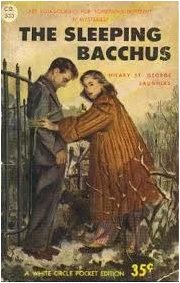 Hilary St. George Saunders, perhaps better known under the penname he shared with John Palmer, “Francis Beeding,” took a rather unconventional approach when he laid the groundwork for his novel The Sleeping Bacchus (1951) – which was originally a French mystery by Pierre Boileau. Saunders stumbled across a copy of Le Repos Bacchus (1938) in a Parisian bookshop and cheekily asked its author permission to emend and rewrite the book in English, which, needless to say, he got and from this arose a classic tale of a debonair gentleman thief portrayed on the canvas of a grand detective story.
The purloining of an invaluable objet d'art commonly fills the pages of a short story or relegated to the grade of a sub-plot and when such a theft takes top priority in a novel, it's usually in a caper. But this book is not an off-shoot of the Rogue School of Fiction, in which we tread on the heels of a gentleman about town as the charming fellow relieves overstuffed bankers and icy widows, dripping with diamonds, of their hoarded wealth, but one that has its roots firmly planted in the grounds of that nightmarish wonderland, "with all the mad logic of a dream," that writers like John Dickson Carr and Hake Talbot used to frequent.
Ex-war veteran John Marriott receives a pressing message from his uncle Walter Thresby, a famous art collector, asking him to go on his behalf to Montreal to supervise the purchase of a painting after Thresby received a distressing message (i.e. blackmail note) from an old acquaintance – a thief nicknamed "Zed" who once before intervened in one of Thresby's attempts at obtaining a picture.
But before Marriott could lift his heels, Thresby is robbed of the showpiece of his collection, Leonardo da Vinci's "The Sleeping Bacchus," which was spirited away from his locked and secured gallery under baffling circumstances and despite catching one of the thieves they are unable to find a trace of the picture. More miracles are afoot in this story: one of the thieves returns to the estate, retrieving a cylinder from the grounds encompassing the gallery, has a run in with Marriott, who ends up tied to a fence (see the cover), and proceeds over the moors towards an "unclimbable" fence and conquers it in a matter of seconds – which could only have happened if he phased through it like a ghost. A third impossibility involves the vanishing of a Black Maria (a police van) with its occupants.
I think this story perfectly demonstrates the fallacy of Van Dine's Rulebook that states that there must be a corpse, none to be found between the covers of this book, and shows the allurement of the impossible (crime) that can turn, if properly handled, even a simple domestic problem into a genuine puzzler. But as much as I dote on these locked room mysteries, I loved the second half of the story, in which "Zed" reveals himself in a wonderful scene to John Marriott and his uncle, even more and enjoyed the cat-and-mouse game that ensued – as the former tries to relieve them of a King's Ransom in exchange for the sleeping deity while the latter attempt to retrieve the painting from its unlawful owner. Pierre and Raoul, two veteran buddies of Marriott, who eventually solve the theft and explain the string of seemingly unexplainable events that have plagued them, are assisting them in this endeavor.
The disappearance of Da Vinci's painting and the ghostly intruder, who braved an impregnable fence the way a phantom would've done, are satisfyingly explained – even though I feel a bit iffy about the fairness of them. But then again, my reading of this book has been very fragmented and perhaps missed out on one or two of the finer details that were given.
On a whole, this is an excellent, but atypical, detective story that deserves a spot in the gallery next to the masterpieces crafted by John Dickson Carr and Joseph Commings – acknowledged grandmasters of this form. But it also deserves praise for introducing a wonderful and striking villain. I know the person behind the "Zed" persona is not suppose to garner sympathy from the reader and should even be considered annoying, but I found myself unable to feel any aversion and even cheered this bandit on. It might be misplaced sympathy, but who's complaining when the fun keeps piling on?