From the Gullet of the Serpent

"Always remember, it's a trick. Keep that in mind and you can figure out how it's done."
- Columbo (Columbo Goes to the Guillotine, 1989)

One thing that has confounded me, ever since I read about it, years ago, is how the man who delivered Sherlock Holmes into this world, the embodiment of scientific and logical reasoning, turned to the paranormal – suspending his rational faculties and empirical enquiry in order to wrap an aching heart in the false comforts of spiritualism. Well, confoundedness is perhaps not the best word to describe how I think of Conan Doyle's innate longing for life beyond the grave, roused after having laid so many loved ones to rest, but it's not what you'd expect from a man of science and medicine. However, this confidence in the existence of ghosts and fairies, professed by a man who, ironically, was also one of the leading lights in a nook of the literary world that adopted the same skeptical stance towards mediums as one of their biggest detractors, Harry Houdini, turns into a charming characteristic when juxtaposed with the questionable claims made by one of his fellow composers in crime around that same time.
Elsa Barker was a minor name in the publishing industry, who lived abroad during the years leading up to The Great War, but ensured that the memory of her name would linger on with the publication of Letters from a Living Dead Man (1914) – a collection of epistles dictated by a Los Angeles court judge named David P. Hatch after his death in 1912.
During the year of Hatch's passing, Barker was in Paris when she begins to feel "strongly impelled to take up a pencil and write" and churned out a stack of letters, which were all signed with an anonymous X – or at least so it appeared. But when this discerning woman of letters learned that X was also a nickname for a judge, back in the United States, she astutely drew the lines to connect the scattered dots and came to the only sensible conclusion: she had become a receptive medium for messages from the spirit world. Over the next five years, Barker ghosted two more compendiums of Hatch's letters, War Letters from a Living Dead Man (1915) and Last Letters from a Living Dead Man (1919), and a book composed of free verses, Songs of a Vagrom Angel (1916), dictated to her by an angel. No. I'm not making this up.
These books made quite a splash in mediumistic circles around the globe and there seems to be a resurged interest in them now, but, at the time, the veracity of them was called into question and their intermediating author slowly evanesced from the printed pages after the hype died down. But during the late 1920s, Barker made a grand reentry into the publishing world and this time took a stab at the popular detective story – penning three novels that featured the celebrated crime expert Dexter Drake and his chronicler Paul Howard. 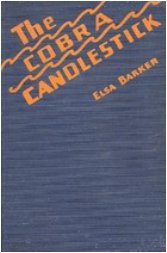 The Cobra Candlestick (1928) was their first recorded outing in the field of criminology, at least, one that filled the pages of a full-length novel and the opening chapters suggest strong influences from S.S. van Dine and Conan Doyle, but without falling into the trap of becoming a carbon copy of the originals – and nearly all of their faults were barred from this novel. The first chapter has the tone of a Van Dine novel as the narrator, Paul Howard, reminisces over the case of the cobra candle stick, which he describes as the strangest case they worked on since he took up the position of Dexter Drake's personal assistance two years previously.
Dexter Drake is not a dilettante who began meddling in murder cases merely to pass the time between cocktails, collecting rare artifacts and quoting obscure passages from curious volumes of forgotten lore, but established himself as an independent consultant who earned the admiration of Scotland Yard and the Sûreté – among other respectable police organizations around the world. Howard describes him as a debonair man of the world with black eyes that weigh everyone on invisible scales and he turns out to have an extraordinary faculty for languages, however, he lacked the insufferable character traits that would qualified the murder of Philo Vance as a justifiable homicide. Anyway, regardless of his considerable intellect and talent, he comes across as a nice and respectable person with a great deal of respect for professional policeman, who, in turn, are competent professionals instead of the bumbling, ineffectual idiots that Doyle interjected into the genre.
The case commences when a messenger, named Percival Crumbie, arrives at their abode with a hastily scribbled note from his neighbor, Madame Marshbitter, containing an urgent plea to immediately come down to her home, situated in a rural area of Connecticut, where her only son was murdered in the library under inexplicable circumstances.
John Marshbitter was on his own in the library, poring over his notes, when a well-aimed blow crashed through the roof of his temple, killing him almost instantaneous, but the exists of the room were under constant observation by various family members and guests of the house. Marshbitter's mother-in-law, Mrs. Frew, was lounging on the couch in the hallway, his son and daughter, Ted and Mary, were on the veranda outside and the man who rented their summer house, Nicholas Pogue, was in the next room playing on the piano facing an interconnecting door and they all swore that nobody left or entered the library during the time of the murder. 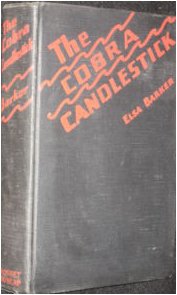 This makes for a tantalizing problem, especially for such a distinguished and lauded detective as Dexter Drake, but a prior commitment necessitates his presence in Washington and he sends Paul Howard ahead of him to lay the preliminary groundwork for his investigation. Consequently, the Great Detective is absent for a large portion of the book and this struck me a conscious nod to The Hound of the Baskervilles (1902), which, in turn, also gives Howard and Sergeant Doon an opportunity to shine as detectives – and upon Drake's return they are able to present him with a lattice work consisting of facts, clues and red herrings.
What complicates John Marshbitter's murder is not necessarily the seemingly impossible nature of his death, but determining the truthfulness of the witnesses stationed at the exits of the library and the opportunities they had at their disposal to sneak in and deliver the fatal blow. This gives the book more of a how-was-it-done feel than that of a locked room mystery, however, it's a nifty idea to leave it undecided whether or not the characters are facing a classic locked room problem, which is even further complicated when the suspects began to drag red herrings across the trail – making it even harder to separate the real facts from the fabricated ones. I also found it amusing that every type of letter that can mystify a detective story turns up in this book: anonymous letters, threatening letters, unfinished letters and hidden letters.
The outcome is a gratifying and complicated plot, which does a surprisingly competent job at directing attention away from the obvious suspect and dropping clues that played fair with the reader. The only blotch on the solution is that Dexter Drake withheld one piece of information that would've told you how the murderer escaped the closely observed library, but then again, once you suspect this person and have familiarized yourself with the facts you can, as an experienced reader of detective stories, pretty much guess how this trick was pulled off and roll your eyes at it. Much more rewarding is putting the sequence of events, leading up to the murder, in the correct order to form a complete and coherent picture of what happened at the Marshbitter estate.
All in all, this book turned out to be pleasant surprise and was worth the gamble I made when I purchased it. The book modeled itself on detective stories from previous eras, but with most of their weaknesses, clichés and stock-characters absent and with shades of the ingenious plotting that became synonymous with detective stories from the 1930-and 40s – as well as a playing reasonably fair with the reader. There are still a fair amount of imperfections to be found in this book, but, in the end, it was far above any expectations I had of it.
The Dexter Drake and Paul Howard Mysteries:
The Cobra Candlestick (1928)
The C.I.D. of Dexter Drake (1929)
The Redman Cave Murder (1930)
By the way, I was planning to lay off locked room mysteries until, at least, February, but then a special package arrived a week or two earlier than expected and I simply have to dig into them as soon as possible.
Geplaatst door TomCat on 1/14/2012