A Tough Nut to Crack

"What description of clouds and sunsets was to the old novelist, description of scientific apparatus and methods is to the modern Scientific Detective writer."
- Hugo Gernsback.

Raymond Chandler once said of Dashiell Hammett, one of the trailblazers of the Hardboiled School, that he returned murder in the capable hands of those individuals who were not faced by the seamier side of life – committing crimes for a reason and not to provide a body to reinvigorate the reader's interest in chapter XII. The mean streets supplied them with the simply means for murder that excluded the hand wrought dueling pistols, curare and tropical fish, however, quite a few of their literary decedents tugged the hard-bitten private eyes on their sleeves into a more classically furnished environment.

Over the course of forty books and stories, Bill Pronzini drew a detailed picture of the life of his nameless gumshoe, resulting in one of the most realistic and well-rounded characters in the genre, but he still stumbles over murders that could have sprang from the imagination of John Dickson Carr (c.f. Hoodwink, 1981). Henry Kane's The Narrowing Lust (1955) has his "private richard," Pete Chambers, confronted with an apparent suicide in a secured room with all the doors and steel shutters locked from the inside and Michael Collins' one-armed shamus, Dan Fortune, grapples with the handle of quite a different locked door problem in the short story, "No One Likes to Be Played for a Sucker." 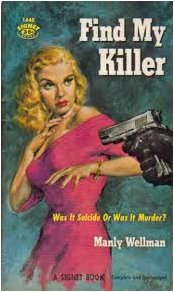 Manly Wellman's Find My Killer (1947) is another excellent sample of taking the tough, street hardened private eye, with a take-no-nonsense attitude, and assign him to a case that should've been entitled The Pistol Murder Case signed by S.S. van Dine.

Find My Killer opens with Jackson Yates, an ex-policeman operating on a free-lance basis, dropping by at the office of J.D. Thatcher, a lawyer who turns out to be a woman with eyes that are two different shades of blue, hoping to procure an open spot as a bodyguard for one of her clients. Unfortunately, for him, the services of a bodyguard are no longer required and he's not the only one who's miffed about it. Yates finds one of his would-be-contenders for the job harassing Thatcher and quickly disposes of him in a good, old-fashioned bare knuckle fist fight. Impressed with his quick and effective performance, Thatcher offers Yates a partnership on a job that could very well put a $5000 check in their pockets.

Richard Ealing offered this bounty, written down in an official codicil that was attached to his will, to everyone who can find his killer and deliver the proof needed to secure a conviction, but the problem is that his death is being written-off as a suicide – which is sort of a problem when you intend to tag someone for murder. Consider the facts: Richard Ealing drew his last breath in the gunroom, after a slug from a derringer, a short-barreled pistol, hit him in the chest and the weapon was still clutched in his hand. Paraffin tests showed the presence of gunpowder residue on the dead man's hand and the door of the room was locked from the inside. A tough nut that has to be cracked if they want to slap either his much younger wife, her lover, his personal physician or any of the other stock-in-trade suspects with a murder charge and cash in their just reward.

Wellman delivered with this novel a text book example that shows how to intersperse hardboiled sequences, in which, for example, our narrator has to go to blows with a dunderheaded homicide cop, with a cleverly conceived plot that contains big chunks of clues – both real and false. Although the clue to the murderer's motive wasn't given until quite late in the book.

Anyway, what makes this book, IMHO, special is that the structure of the plot rests on forensic science, such as ballistics and pathology, placing the story somewhat awkwardly in the Scientific School of Detection. But these scientific elements or cleverly exploited, on both sides of the table! As a matter of fact, it's done so well that I can almost forgive him for the routine solution and off-hand explanation of the locked room angle, which was the only plot thread that did not came true to the promise that its premise made and a bit more originality, in combination with the forensic portion of the solution, would've turned this into an impossible crime novel to take notice off.

Otherwise, it comes recommended for being a perfect specimen of what was conceived before the shotgun wedding between the Golden Age Detective Novel and the Hardboiled Private Eye Story.
Geplaatst door TomCat on 1/25/2012