Earlier this month, I returned to Brian Flynn with the first novel from the third set of Dean Street Press reprints, Cold Evil (1938), which began promising enough until it all fell apart in the last two chapters – translating into a lukewarm review. Flynn has an excellent win/loss record in my book with only four misses to his name. So the odds were in my favor the next time around, but were they good odds? Time to find out! 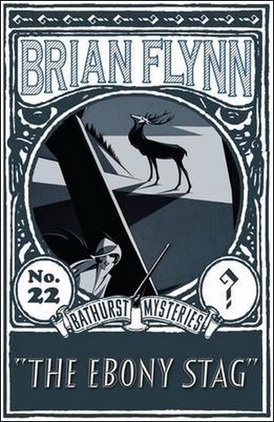 The Ebony Stag (1938) is the twenty-second title in the Anthony Bathurst series and begins three weeks after a gruesome and still unsolved murder in the village of Upchalke. One of those small bungalow retirement communities on the west coast of England.

Robert Forsyth was a 73-year-old rate collector and was brutally attacked on an early October evening in his bungalow, The Antlers, which left quite a mess. A terrific blow to face cut his lip and loosened his front teeth, but the cause of death was "a great gash just above the breast-bone" inflicted by strange, unidentified weapon and every article of furniture near the dead man was spattered with his blood. There are two more peculiar features to the case placing it well above your common, garden-variety murder. A small, carved figure of an imitation ebony stag that used to stand on Forsyth's mantelpiece was "smashed to smithereens" without apparent reason and there's an impossible angle to the murder – which nobody saw fit to mention or point out to me. I would have started this third round of reprints with The Ebony Stag instead of Cold Evil!

The front door of the bungalow was bolted and the backdoor locked and bolted, but the key to that door was missing. However, it hardly explains how the door was bolted. Only possible in the bungalow was a small, partly open scullery-window that big enough for a small child to worm through, which is how they were able to open the front door without breaking it down or smashing a window. Admittedly, the locked room-trick is not all that spectacular, poorly motivated ("...to mystify the police") and only a tiny piece of the puzzle that's not given too much attention. But it counts as an impossible crime. And needs to be included in that inevitable, fourth supplement edition of Locked Room Murders.

So the local police get nowhere Major Marriner, Chief Constable of Remenham, turned to Sir Austin Kemble, Commissioner of Police, but New Scotland Yard is overstretched. Sir Austin has to turn to his friend, Anthony Lotherington Bathurst, who has garnered a reputation as a "well-known crime-expert." And he's pretty much given a freehand to investigate the murder on his own. An amateur detective's daydream come to life!

All three agreed he would have a much better chance of picking up valuable information incognito. So he goes to the village as Mr. Lotherington, "an artist hoping to execute two or three picture commissions during his stay by the waters of the Chal," to poke around Forsyth's circle of acquaintances and cronies. Forsyth had three so-called intimates, Randolph Skipwith, Leonard Burns and Andrew McCracken, who used to spend a lot of time together playing cards or sharing a drink or two at the local inn, The Tracy Arms – earning them the nickname of "old chinas." Among his less frequent visitors and acquaintances were such notables as Reverend Charles A. Sellon, the Vicar of St. Veronica's, and the village physician, Dr. Innes. Mrs. Margaret Swan is an old friend who used to visit Forsyth about once a month. Lastly, there's a young journalist, Cyril Mulrenan, who enjoys a private income and shared Forsyth's liking for amateur-dramatic work. Bathurst gets his most valuable leads from several people outside of "Forsyth's chosen friends and his mere acquaintances." 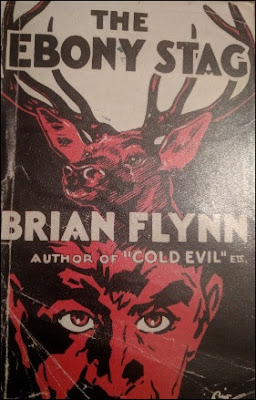 Bathust has a change encounter with Wilfred Hatherley, chief Audit Clerk to the County Borough of Easthampton, who's a former colleague of the victim and what he reveals puts an entirely different complexion on the case. A complexion allowing Flynn to indulge in his pet trope, namely the false-identity, because the Forsyth he knew "had his teeth extracted two or three years before he retired." So who had been murdered in the bungalow and what happened to the real Forsyth? Don't worry. This is all revealed early on in the story. A second outsider is Captain Falk Stromm, late of the Swedish Navy, who came to England aboard a Swedish timber ship, the Vaar, to enjoy a holiday. But he and Captain Vass helped Bathurst out of tight corner or two over the course of the story. I should perhaps also mention the second victim, who counted as an outsider, because that murder proved to be one of the vital puzzle pieces that ultimately betrayed the murderer.

Needless to say, The Ebony Stag is Flynn's return to his pleasantly busy, knotted whodunits and not only concerns an impossible murder with a strange weapon and false-identities, but also has a very well hidden, cast-iron alibi and eight-decades-old coded message – which Bathurst refers to as the "stag" cryptogram. A cryptogram linked to a long-ago, nearly forgotten maritime disaster and a treasure of lost gold. Flynn practically threw every well-known trope at the story with various degrees of success as he eventually had to pick what aspect of the plot to concentrate on. And his attention mostly went to the triple-W: who was the victim, who killed him and what happened to the real retiree? The locked room is merely side dressing and the cryptogram only comes into play during the final stages of the story. Flynn put too much on his plate. But, just as a whodunit, it was very well done and an entertaining detective novel from start to finish.

Steve Barge, of In Search of the Classic Mystery Novel, who rediscovered Flynn and wrote the introductions to the reprint editions, reviewed The Ebony Stag in 2020 deeming it to be a "very entertaining and a gripping read" – but "not his strongest work." I agree. But don't let our technical nitpicking get in the way of a good, solid and fascinating read. Highly recommended to everyone who's already familiar with Anthony Bathurst and Brian Flynn!

A note for the curious: The Ebony Stag has a locked room, false-identities and alibis, but the smashed figure of the titular stag, sort of, works as a dying message. Although done by the murderer and unintentionally provided Bathurst with the first of many clues. So detective story tropes were very much on my mind when another, rarely used trope seemed the materialize. Namely the rival detective. Wilfred Hatherley brings Bathurst into contact with his boss, Frederick Gulliver Sharpe-Lodge, who's the Borough Treasurer of Easthampton. Bathurst "had never met a man like this before," but the most astonishing thing is that he tells Bathurst Hatherley had solved "the mystery of a secret Trust Fund" and cleared up "the St. Angela's kidnapping case in less than a month." This not only smacked of rival detectives, but of a crossover! Flynn wrote a second, short-lived series about a character named Sebastian Stole under a pseudonym, "Charles Wogan." I wondered if he might have written a third series under another name. Maybe even a series of short stories. Curiously, Flynn is one of the few mystery writers (especially from his time) who apparently never wrote any short stories. So I poked around the web to see if I could find any obscure detective novels or short stories with characters named Wilfred Hatherley and Frederick Gulliver Sharpe-Lodge. Nothing so far. I advise to keep those names in mind in case you ever come across a story with an audit clerk and treasurer as the detectives.