One Deathless Hour (1981) by Roger Ormerod

During the 1970s, Roger Ormerod crime-and detective fiction featured two different series-characters, David Mallin and George Coe, who had their respective first appearances in Time to Kill (1974) and A Spoonful of Luger (1975), but Ormerod decided to bring them together in Too Late for the Funeral (1977) – which has them "approaching the same case from entirely different directions." A crossover that marked the beginning of their partnership. Over the next five years, Mallin and Coe appeared side-to-side in novels like The Weight of Evidence (1978) and More Dead Than Alive (1980). 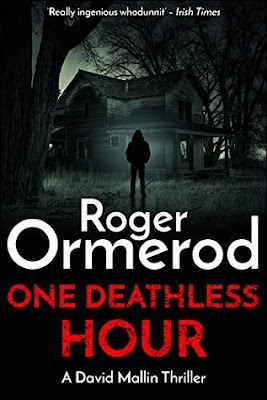 I don't think unifying two series has ever been done before like this in the genre. There were occasionally crossovers (Stuart Palmer and Craig Rice) and sporadic cameos (H.C. Bailey's Reggie Fortune and Joshua Clunk), but never a merger to create a new series. So it's possible Ormerod actually delivered something new under the sun with Mallin and Coe's partnership.

I should have started with the earlier novels and worked my way through the crossover novel, but I'm chronologically challenged and the later titles lured me with their promise of locked room murders, impossible crimes and head scratching alibis – tropes that I find really hard to ignore and resist. And today is no different!

One Deathless Hour (1981) is the last entry in the series and not merely marked the end of David Mallin and George Coe's recorded career, but the first-period in Ormerod's writing as he completely shed the traditional private eye format. During the next two decades, Ormerod's mystery novels gained an even more traditional slant with sharper writing, better characterization and finely-polished plots. The Hanging Doll Murders (1983), The Key to the Case (1992) and A Shot at Nothing (1993) are retro Golden Age mysteries with a new coat of paint, but the neo-classicist in Ormerod was already present in his private eye fiction. Subject of today's review is a perfect example of Ormerod's increasing devotion to good, old-fashionably plotted detective stories.

Victor Abbott is the personnel manager at one of the new factories on the industrial site of a budding town, Watling, who's a member of the Watling Small Arms Club. Abbott comes to Mallin and Coe to help him "provide an alibi for nine o'clock on Tuesday evening." Story he tells the two private eyes is either the flimsiest tissue of lies ever told or the plain, unbelievable truth.

One Tuesday evening, Abbott went to the clubhouse to try out his new pistol and parked his Triumph Dolomite with all the windows open on account of the hot, stifling weather. When he returned two hours later, Abbott found the body of man sitting in the passenger's seat with his face against the car's fascia clock and "a bullet hole in the back of his neck," which had blown half his face away and soaked everything in blood – preventing immediate identification. Abbott tells Mallin and Coe he suspects the victim could be Charles Colmore. Someone he has "always hated" as Colmore is the reason why his first marriage ended and he remarried his ex-wife, Dulcie. So, understandably, he desperately needs an alibi and hammers on a very specific time. One minute to nine. Mallin suspects the bullet wrecked the fascia clock and Abbott noticed the time, but the police is not showing the two detectives all of their cards. This is where Abbott's story becomes hard to swallow. 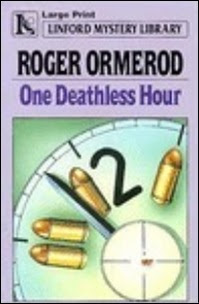 During those two hours of solitary target practice, Abbott only needs an alibi for those couple of minutes around nine o'clock evening. Miraculously, he had a very curious visitor shortly after the man outside was shot. A young, incoherent man who was "waving one of those stupid imitation plastic guns" and demanded guns. So he shot off the tip of the youths left earlobe! This happened barely two minutes pass nine and Abbott wants them to find this witness "to be produced... only if the police makes a charge." A very dodgy story, to say the least, but it gets stranger!

Mallin and Coe alternately narrate chapters as each tackle a different end of the case. Mallin begins with "roaming the pubs for a blond youth with one earlobe missing," which quickly brings him into contact with the local police. Meanwhile, Coe travels to Bentley Hall to interview Dulcie to discover whether she had now become a widow, but complicated the case even further when he finds the body of Colmore's mistress, Marilyn Trask – shot and killed with the same high-velocity twenty-two. The police were able to exactly pinpoint the time of the murder: eight minutes to nine on the evening Colmore was shot in the parking lot of the Watling Small Arms Club. This presents the investigators with a tricky problem described in the story as "a rank impossibility."

A problem that can be boiled down to "how two people could be shot by the same person, at roughly the same time, sixty miles apart," but, while it looks like an impossible crime, even I couldn't label it as one. This is an alibi-puzzle in the spirit of early period Christopher Bush with two closely-timed murders complicating the problem, but Ormerod completely inverted the concept of manufacturing alibis. The problem here is not destroying seemingly cast-iron alibis, but trying to figure out why they never materialized. Closing the time-gap between the two murders is the key to the solution. Naturally, the possibility of (ROT13) zhygvcyr zheqreref be na vaperqvoyr pbvapvqrapr have to be taken into consideration. Neither of which are used to explain the murders, but both have a role to play in the solution. Very playful. But there's something else about the solution I admired much more.

Ormerod refused to go with the obvious explanation for the two shootings "one hour's drive apart." The plot synopsis of One Deathless Hour suggested an impossible crime and already had an idea how it could have been done, which was mentioned and apparently confirmed in Chapter 5. Only to be shot to pieces as a false-solution when the police finally began to share information with Mallin and Coe. A piece of information that made Colmore's murder "almost unmovable from one minute to nine" and practically anchored to the crime scene. What worked against the story was the shoddy, sometimes unfair, clueing and that the ending needed a touch of suspense to punch it up a bit.

That makes One Deathless Hour a typical, early period Ormerod mystery novel. A mystery novel with several solid or even innovative ideas, but very rough around the edged and sorely lacked the polish of his "90s mysteries. However, Ormerod began to drastically improve around the early-to mid 1980s and learned how to utilize his plot ideas to the fullest of their potential. Something he became so good at that it made And Hope to Die (1995) feel like a genuine, modernized GAD-style country house mystery and not a botched, cliche-ridden and unfunny send up. And he did it with a small, almost bone dry pool of suspects and a plot that hinged on a very old dodge. You can see this shift slowly beginning to take shape in his Mallin and Coe series with the previously mentioned More Dead Than Alive reading like precursor to Jonathan Creek.

So One Deathless Hour comes recommend to either fans of Ormerod or mystery readers with a particular interest in picking apart, or putting together, tricky alibis. My next read is going to be another Ormerod from the late eighties or nineties.