The Money Supply: "Karmesin and the Meter" (1937) by Gerald Kersh

Gerald Kersh was a British naturalized American writer and one of the more popular and prolific storytellers of his day, hammering out thousands of articles, dozens of novels and numerous short stories like a sloshed conveyor belt, but enjoyed most of his popularity with his short stories – many of them "horrific or fantastical in nature." There's one character who appeared in seventeen of Kersh's short stories and garnered him some very famous fans such as Rex Stout, Basil Rathbone and Sir Winston Churchill.

Karmesin (pronounced carr-muh-zin) debuted in the eponymously-titled "Karmesin," published in the London Evening Standard on May 9, 1936, who may or may not have been inspired by a real-life acquaintance of Kersh. 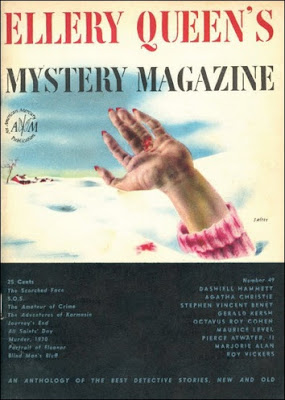 Karmesin is a middle-aged with a "vast Nietzsche moustache," light brown with tobacco smoke, "which lay beneath his nose like a hibernating squirrel" who regularly meets with Kersh to tell him tall tales of his past criminal escapades – which are "so outrageous that they cannot be true." The question Kersh always asks himself whether Karmesin is "the greatest criminal" or "the greatest liar of his time," but you cannot help liking the man. Karmesin is the kind of man, "if he stole your wallet," you would say, "I'm sorry there's not more in it." You would rather be swindled by Karmesin than by anybody else. So the series is the Rogue's School answer to the armchair detective story! More importantly, one of the stories is listed in Brian Skupin's Locked Room Murders: Supplement (2019) with a promising-sounding locked room-puzzle, to say the least.

"Karmesin and the Meter" was originally published as "Karmesin and the Big Frost" in the 1937/38 Winter issue of Courier and reprinted under variously different titles in Argosy, The People and Ellery Queen's Mystery Magazine. Finally collected under the current title Crippen & Landru's Karmesin: The World's Greatest Criminal—Or Most Outrageous Liar (2003).

The story begins with Karmesin visiting Kersh when his gas-ring goes pop and doesn't have penny in his pocket to feed the gas meter, which made Karmesin recall the time he swindled a French gas company for thousands of francs.

Years ago, Karmesin contracted a severe attack of influenza in Paris, while temporarily short of money, confining him to a bed in an abominable little rented room in the atrocious cold of one of the severest winters on record, but he had no money to heat the room – only a threadbare blanket to give him the illusion of warmth. But during one of his fever dreams and cold shivers, Karmesin hit upon an idea that would both heat his room and put some spending money back in his pocket. On the next day, his gas lights were burning, the gas radiator was glowing and he had stopped shivering. But at what price? Several weeks later, the man from the gas company came to empty the meter, but, when he removed the padlock, the meter was empty! Not a penny had been paid for the consumed gas. Karmesin told him he had no idea what he was talking about and to "go to the devil." So the meter was padlocked and resealed.

Two weeks later, the collector returned without another official, examining "the seal on the padlock and found it intact," but the box was again empty. Even though the lights in the room were glaring and the stove red hot! But the padlocked was protected with "one of those complicated lead seals" that's not easily be tampered with. So they replaced the meter with a new and different model, but the same song and dance was repeated for a third time.

Just as he expected, one of the directors of the gas company came to visit him to ask what kind of tricks he has been playing with his meter, but the answer to that questions comes with a prize-tag. If they're not willing to pay up, Karmesin is going to tell the public how they can consume as much gas as they want without paying a single penny. Needless to say, they were more than willing to do business.

"Karmesin and the Meter" is not a traditional detective story and therefore not traditionally clued, but, if you take the circumstances of the story into consideration, you can work out the general idea behind the meter-trick. An ultimately very simple trick, but, as Karmesin wisely says, "all truly great crimes are simple." A marvelous reimagination and reapplication of an old impossible crime dodge. I enjoyed it! Very much recommended. And I'll definitely return to the other stories in Karmesin: The World's Greatest Criminal—Or Most Outrageous Liar.