During the first years of Nazi occupation of the Netherlands, Bruna published two detective novels by an unknown, pseudonymous author, "Vanno," who crime fiction collector Wim van Eyle identified as Charles van den Dool and the war likely ended more than just his writing career – reportedly executed in 1944 as a member of the Dutch resistance. However, I've been unable to find anything to corroborate the report of his execution. So take that as you will. 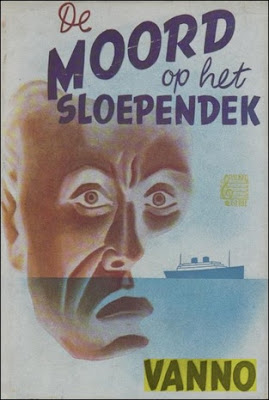 Fortunately, I stumbled across Vanno's second detective novel, De moord op het sloependek (The Murder on the Boat Deck, 1941), which not only sounded promising, but delivered most of the goods. A much needed uptick in quality after my previous two excavations of the Dutch detective story, Dick A. van Ruler's Moord op een negatief (Murder of a Negative, 1963) and B.J. Kleymens' In de greep van de kreeft (In the Grip of the Lobster, 1965), turned out to be paper thin affairs.

The Murder on the Boat Deck is, as the title suggests, a shipboard mystery and entirely takes place aboard a luxury cruise ship, the Princesa Marya, which lifted anchor in Venice, Italy, embarking on a holiday trip in the Aegean Sea – along "the smiling shores of Yugoslavia" and "the beautiful, ancient edifices of Athens." There are two detectives aboard on a well deserved, long overdue holiday. Inspector Barney D. Weston, of the New York Metropolitan Police, who's a typical, hardboiled homicide cop occasionally hampered by a short-fused temper. Weston is accompanied by a friend and "a detective of some notoriety," Charles Venno, whose methods of deductions is described by Weston as "screwy, quasi-psychological lectures" comparable to a "fantasy sleuth from the detective novels." But he gets results. And their fellow passengers are determined to turn their last three days aboard into a busman's holiday.

Rex Corbin is a manufacturer of undisclosed goods and his chronic jealously not only makes his wife, Elsie Corbin, terribly unhappy, but makes her very susceptible to the charms of the cruise's troublemaker. Allan Hunter is a land surveyor and, as someone aboard described him, a "damned, self conscious womanizer." Hunter is very unhappy as he spend years in a remote corner of Venezuela as a land surveyor for an oil company, living in a primeval forest away from civilization, which is why he's determined to have some fun. Robert Jones is a lean, sinewy and funny looking man who accompanied Tom and Mary Vane on the cruise. Daisy Mitchell is a holidaying secretary who had a brief, but intense, holiday romance with Allan Hunter. Ted Randell is a writer who mockingly confides in Venno and Weston that he would be ashamed to use what happened on the Princesa Marya as a plot for one of his books, because it has "the level of a dime store detective novel." But he has important information to share with the two detectives. Vanno and Weston also get help from a lonely, middle-aged passenger, Miss Alice Ferris, who hungers for adventure and romance, but even she has to admit the movies pale in comparison to "these wonderfully frightening and yet so terrifying-exciting events" that surround a real-life murder. Gordon Waller is a representative on holiday and has been chasing Mrs. Corbin during the entire trip, but now had to look on as Hunter threatened to snatch her away from him and her husband. There also two school teachers, Dorothy Campbell and Louise Coburn, and a businessman, Aloys F. March. But the trouble really began with another passenger, Dr. James R. Holton.

James Holton is an ethnologist who's asked why there's a small, snakeskin tube attached to his watch chain, like a good luck charm, but, even more importantly, what's inside it – which turns out to be a miniature model of a poison smeared arrow. Curare, to be precise. A very potent poison that kills within seconds when enters when it enters the bloodstream! So a very dangerous object that has to be carefully handled, but, somehow the tube with the poisoned arrow disappears. Everyone simply assumes it had been mislead somewhere, but, later that evening, they discover there was a much more sinister reason why it got lost. 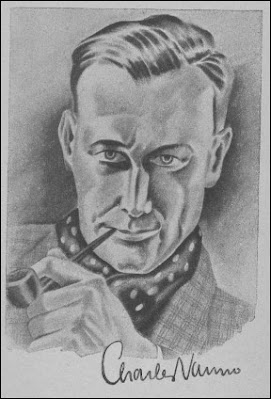 The murder is preceded by an late night, shipboard game, called "Paspoort," in which everyone has to draw a piece of paper from a hat. All but one of the papers has the word passport written on it and they have to scatter and hide in couples, while someone playing the customs officer is tasked with finding the person who drew the blank paper. However, the game is merely an excuse to fool around the boat deck. This naturally leads to some tension among the participants.

Later that night, the group decided it was too late and warm to go to bed. So they agreed to wait until sunrise and go for an early morning swim, but Hunter told them he was going to shave first ("I have a beard like a robber") in his cabin. The rest of the group placed deck chairs in front of the cabin door to talk and tell jokes, but, a few minutes later, they hear a heavy thump inside. Hunter inexplicably died without a sign of a death struggle and only the pale, bluish tint of the face betraying he didn't die naturally. The ship doctor determines he was poisoned with curare, which not only ended Venno and Weston's holiday, but presented him with a seemingly impossible poisoning in a cabin with the door both blocked and watched by a whole group of people!

They neither find a trace of poison or the stolen arrow in the cabin, which poses a real puzzle as both the ship doctor and the medical literature aboard that death was a question of seconds. Not minutes. Hunter had been alone in his cabin for several minutes when he was poisoned. So how was it done? A poisonous puzzle that leads to two false-solutions, but Vanno and Weston belong to the category of fallible detectives as they overlook some pretty obvious flaws in their solutions – one of them pointed out by a potential suspect. Nonetheless, I very much enjoyed these bits and pieces of theorizing and constructing false-solutions. Only to see them get demolished like sandcastles. This time, the false-solutions didn't outshine the real solution! Although one of the false-solutions, implicating the ship doctor, could have been explored a bit more in depth as there are many variations possible on that idea. For example, Hunter could have become actually sick and the doctor, who has a ghost of a motive, could have pricked or scratched Hunter when he looked him over. Hunter could also have had some kind of stomach problem, like ulcers, which would open the possibility of introducing curare into his bloodstream via the stomach by way of a curare laced drink. This perhaps could have delayed death a few minutes. Maybe...

Nevertheless, the actual poisoning-trick is more practical (considering the murder weapon) and something I should have immediately caught, but imagined something from the period completely wrong. What tripped me is that it was fairly mentioned, but not described in detail. Not that it was necessary at the time. But some reader's today might miss it. Needless to say, the impossible poisoning-trick is one that Paul Doherty would no doubt approve of.

The Murder on the Boat Deck is not merely a shipboard locked room mystery, because there are two more murders and various plot-threads to keep Vanno and Weston hopelessly tied-up, while only having a few days to clear everything up – before having to hand over the case to the Yugoslavian authorities. A prospect nobody is looking forward to. While not every plot-thread knocks out of the park and the ending misses that Agatha Christie, rug-pull-like effect Vanno (the writer) was aiming, I was nevertheless impressed how everything dovetailed together. A scheme that started out as a subtle and relatively crime slowly collapsed under weight of the cussedness of all things general. There was something else I really loved about the solution. When the who-and why began to dawn on me, I wondered why the murderer didn't kill Hunter during a quiet moment and dumped the body in the sea. It seemed like the simplest and safest approach to accomplish what was taking shape. Well, the ending answered why that scenario didn't happen.

Vanno evidently put some thought into the plot. Even though he didn't think every single thing through to its logical conclusion. Such as the possibilities suggested by the false-solutions, but regardless, The Murder on the Boat Deck turned out to be a pleasant surprise and a solidly plotted detective novel complete with false-solutions and a locked room murder – which I honestly didn't expect to find in this mystery. I merely picked it because of its cruise ship setting. Who doesn't love a good shipboard mystery in sunny climes? So my only complaint is a stylistically one. The Murder on the Boat Deck was published in 1941 and has old-fashioned, now very dated, spelling littered with extra e's and ch's. Secondly, the characters are supposed to be Americans, but act and talk like Dutch characters. However, this has nothing to do with wartime censorship, like with Italian detective story, because pre-1950s Dutch detective fiction more often than not had foreign characters and settings. This is why there was a call in the fifties for the Dutch detective story to have Dutch characters, crimes and setting.

So, on a whole, Vanno's The Murder on the Boat Deck is a welcome addition to that too short list of genuine, Dutch-language Golden Age detective novels. And, while only a second-string mystery compared to the best of its American and British counterparts, I'm always beaming with pride whenever I come across one that does a decent job of holding its own. Hopefully, I'll be able to add more Dutch mysteries from the 1920-40s period to the big pile in the future, because they have become a little easier to find.

You can legally download (PDF) The Murder on the Boat Deck from the Delpher website for private use or as study material. Over the past year, or so, they uploaded a modest, but interesting, selection of vintage Dutch detective novels. So I'll be rooting around in their collection for hopefully something good and unjustly forgotten. Wordt vervolgd!