Several months ago, I probed A Talent for War (1989) by Jack McDevitt, an American science-fiction author, who specialized in futuristic archaeological and historical science-fiction mysteries asking that age-old question, "what in heaven's name is going on here" – strongly influenced by G.K. Chesterton's Father Brown. McDevitt prefers the how-the-hell-was-it-done over the whodunit and cites he has "always been a devotee of the locked room murder" with Chesterton's "The Arrow of Heaven" (The Incredulity of Father Brown, 1926) as a personal favorite. So you can probably understand how a pure science-fiction writer appeared on my radar. 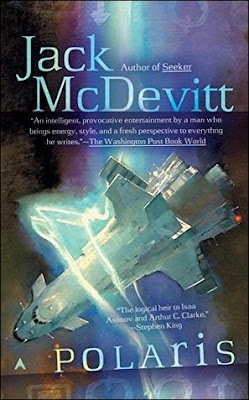 McDevitt's admiration for Chesterton's detective fiction found an expression in his series about a space-faring antique dealer, Alex Benedict, who plies his trade among the stars and settled worlds a hundred centuries in the future. Trouble usually knows where to find him through his business dealings in rare and valuable space age artifacts or sticking his nose a little too deep in a historical mystery.

Alex Benedict was introduced as a one-and-done deal in A Talent for War, but the various characters, fascinating premise and the vast, richly detailed setting would have been wasted in a standalone and so he was brought back in the 2000s – adding seven novels and two short stories to the lineup. I believe these additional novels is what earned McDevitt a comparison with Ellery Queen as most of his attention in the first novel was directed to an impressive and convincing piece of world-building. A multi-world civilization, spread out across the stars, populated with a thousand billions human beings and one other intelligent species, the Ashiyyur, that humanity has come across during its exploration of the Milky Way. But there are still some serious limits to the technology that allowed humanity to colonize distant planets. And the humans who inhabit those planets are still very human. They left behind more than ten thousand years of history, space age urban legends and a ton of unsolved mysteries.

There aren't that many examples of world-building in the traditional detective story. You have Christopher St. John Sprigg's Death of a Queen (1935), Peter Dickenson's The Poison Oracle (1974) and Seimaru Amagi's Ikazuchi matsuri satsujin jiken (Deadly Thunder, 1998). Robert van Gulik's reconstruction of Tang Dynasty-era China in his historical Judge Dee series has been likened to the world-building more commonly associated with the science-fiction genre. So I'm always impressed when someone can make an entire, living and breathing, civilization appear out of thin air.

However, as impressive as the world-building was in A Talent for War, I was glad to discover there was an actual detective hook in the second novel with an intriguing central puzzle. A puzzle that can be summed up as the Mary Celeste in outer space!

There were fifteen years between the publication of A Talent for War and Polaris (2004), which came with a notable change. The books are now narrated by his assistant and superluminal pilot, Miss Chase Kolpath. She has been with him since the Corsarius affair, twelve years ago, which "led to some rewriting of history" and "a small fortune for Alex." This time, they're confronted with another problem that was left open ended in the history books. 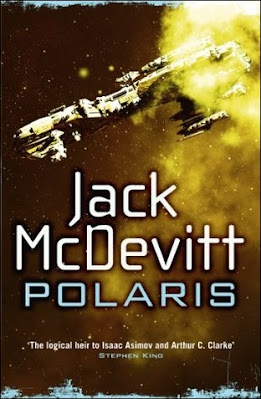 six of the most celebrated people in the Confederacy" boarded a luxury, the Polaris, to accompany a scientific expedition to a 6-billion-year-old star, Delta Karpis, "drifting quietly through the great deeps with its family of worlds" – now counting down its final hours. A year previously, a white dwarf entered the planetary system, "scattering worlds and moons," became "a dagger aimed directly at the heart of Delta Karpis itself." So there are several ships closely observing the approaching destruction, which is both spectacular and tragic as one of the planets is the home of "large animals, living oceans, and vast forests." But has this closely observed collision anything to do with what happens next? Polaris is ready to make the jump back home and Captain Madeleine English tells the communication officer at the Indigo Station, "departure imminent," but the starship never appeared on the other side.

Another starship was dispatched to the last-known position of the Polaris and was discovered a week later, substantially off course, without a trace of the VIPs or crew! There's no sign of a struggle or evidence of a hurried departure. Someone, or something, eliminated "the sole witness the investigators might have had" by shutting down the ship's AI. This suggested to some people "the existence of a supernatural power out there somewhere" that's "capable of invading a sealed ship before an alarm could be sent." Since there was no real answer to be found, the incident passed into the realm of conspiracy theories with the most popular explanations inevitably involving a third, unknown race of aliens. Even ghosts enter the picture as people claim to have seen spirits on the now renamed ship.

Sixty years later, Alex Benedict and Chase Kolpath have discovered and are in the process of exploring the ruins of a giant, eighteen hundred years old Shenji outstation orbiting a blue giant on the on the edge of Confederacy space. The locations of many of these outstations were lost to time and finding one will get the attentions of archaeologists, historians and collectors. Such as Winetta Yashevik, archaeological liaison at the Department of Planetary Survey and Astronomical Research, who plan to open a new wing to mark the sixtieth anniversary of the Polaris incident. Survey is planning "a two-week-long extravaganza" with a banquet and an auction to sell off some Polaris artifacts that were locked in storage for decades. Alex and Chase seize the opportunity to pick some choice items for themselves with the outstation as exchange, which is both a stroke of luck and a harbinger of doom. A huge bomb explosion at the Survey destroyed the entire Polaris collection except for the artifacts currently in Alex and Chase's possession. That's where the problems really begin for the two antique dealers. 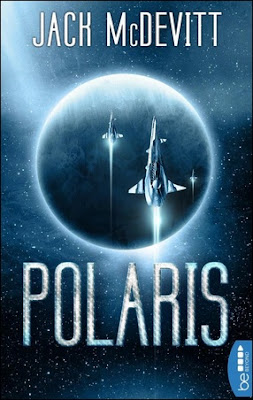 The customers who bought the artifacts receive strange visitors, one aptly named Flambeau, who show great interest in the artifacts, but nothing appears to be stolen or anything to suggest criminal intentions – besides, you know, the bombing of the Survey. But this changes when an attempt is made to get Alex and Chase out of the way. More than once. So, naturally, they begin a deep dive into history as they interrogate virtual rendered avatars of the people ("a projection backed by a data retrieval system") who went missing and talks with some very old witnesses and somewhat lonely AI stuck on a distant outstation. While they're rooting around in the past, they come across a string of missing persons with dodgy records and even some (suspected) murders. More importantly, two hot button issues of the future begin to drift to the surface.

Firstly, one of the VIPs on the Polaris, Professor Tom Dunninger, had devoted his life to cracking the secret of life extension, or practical immortality, "who was reported to have been on the track of a major breakthrough" before boarding that doomed starship. There were rumors that "a few immortals were actually created" who were still out there somewhere. Stuff of legends. However, it got the professor in the crosshairs of some people and groups who believed it would lead to even more over population, which might seem silly when you've got an endless, practically empty, universe to explore and colonize. But there's a logical reason given for this concern. Technically, they could move people from a densely populated world to the virtually empty super continent on Sacracour, but the 1064 superluminals of the Confederacy has an average passenger capacity of twenty-eight people. Just try moving even a fraction of the eleven billion people on Earth to Sacracour with those numbers. So not everyone was happy with Dunninger's work during a time when people already had an average lifespan of more than a hundred years. Secondly, there's the mind wipe and personality adjustment technology used to give incorrigible criminals an entirely new identity, psyche and memories, which comes with more ethical exclamation and question marks than the death penalty. I'm honestly surprised its use was implemented without a huge conflict or an outright, multi-world war. I think mind wipes is something people would go to war over, if it was forced on them.

So the backdrop here is as alive as in the first novel, but what about the mystery? The detective pull of the plot? You have to keep in mind that Polaris is not a traditionally-structured, or plotted, detective story, but the central puzzle was pretty good with the problem of how the people disappeared from the derelict Polaris counting as a legitimate locked room mystery – although one with a relative simple and routine solution. Still a very well presented and handled impossible situation. Much more inspired was the motive behind all these incidents and one person in particular turned out to have been the victim of a truly hellish crime, which definitely had a Chestertonian touch. Something that reminded me of "The Worst Crime in the World" from The Secret of Father Brown (1927).

Polaris definitely benefited from not having to setup an entire section of the universe, populated with two technically advanced species with tens of thousand years of history between them, which made for a stronger and more focused science-fiction mystery. I very much look forward to the third entry in the series, Seeker (2005).

Notes for the curious: I couldn't cram this in anywhere else, but one of the little touches to the backdrop that made the setting so convincing and alive is the distribution between alien life and intelligent, technologically advanced species. There's humanity, the Ashiyyur and the fifty-thousand-year-old ruins on a now inhospitable planet, which were once "humanity's only evidence that anything else had ever gazed at the stars" (mentioned in A Talent for War). There's plenty of life to be found on the planets. Alex and Chase visit the previous mentioned Sacracour that has an eight billion year old bio-system complete with "walking plants, living clouds, and, arguably, the biggest trees on record." Polaris also provides an answer how humans can settle all these living worlds without getting sick and dying. Apparently, the viruses and germs on most worlds are incompatible with humans with an occasional exception, like Markop III, where "viruses and disease germs loved Homo sapiens." I doubt this is scientifically accurate, but that's where the fiction in science-fiction comes into play and appreciate the attention to detail. This is something McDevitt easily could have glossed over without anybody noticing.