Back in 2013, Ho-Ling Wong introduced the traditional mystery corner of the web to James P. Hogan's Inherit the Stars (1977), a science-fiction novel that's at its heart a detective story, but on a scale that's impossible to do in a conventional, earthbound mystery novel – landing a comfortable spot on the Japanese Tozai Mystery Best 100. Hogan's Inherit the Stars left behind a who's who of the classic and modern detective-and crime story. Even science-fiction author and part-time mystery novelist, John Sladek, had to eat dust with his almost universally beloved Invisible Green (1977) trailing far behind Hogan's hard science-fiction tale. Something smelled fishy! 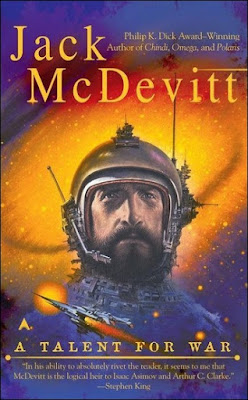 A closer inspection of Hogan's futuristic puzzle of 50.000-year-old human remains in a spacesuit discovered on the Moon proved to tick "about every single box that we want to see filled" with a "slow, devious, torturous and extremely clever unraveling of a complex puzzle." So we shamelessly appropriated Hogan's Inherit the Stars from the science-fiction genre.

Needless to say, I was not adverse to reading more of these archaeological space mysteries, but only found Ross Rocklynne's 1941 novella "Time Wants a Skeleton." A whowasdunin centering on an out-of-time human skeleton found inside cave on an ancient asteroid. But nothing more came to my attention until recently.

Jack McDevitt is an American science-fiction author who specialized in archaeological and historical novels set in the far-flung future that often have a detective hook. McDevitt came to my attention as some of his work has been compared to Ellery Queen and probing a little deeper discovered that he credited G.K. Chesterton's Father Brown as hugely influential on shaping his Alex Benedict series. This comes with the caveat that McDevitt is not "an enthusiast about detective stories in general," but loves "the magic of Father Brown" that have more to do with "trying to figure out what on Earth happened" than simply whodunit and cites one of Chesterton's well-known locked room mysteries, "The Arrow of Heaven" – collected in The Incredulity of Father Brown (1926). So he belongs to the school of thought that believes the how of a crime is often more interesting than the who. A school that has Dorothy L. Sayers as its headmistress and John Rhode as its main lecturers.

So why not give McDevitt a shot and, if I like the series, boldly go where I've seldom gone before by dabbling in some chronological reading.

A Talent for War (1989) is the first title starring Alex Benedict, an antique dealer, who lives and operates about 10.000 years into the future when "a thousand billion human beings" had settled "several hundred worlds" that formed a troubled Confederacy of planets. The story opens with the news that the flagship of the newest class of interstellars, Capella, had "slipped into oblivion" along with twenty-six hundred passengers and crew members, which failed to reenter linear space. Something that has happened before and none has ever reappeared. So everyone aboard is pretty much lost forever. And legally dead.

One of the passengers was Alex's uncle, Gabe Benedict, who left his estranged nephew his
entire estate and a historical puzzle dating back to "the last great heroic age" which has "provoked historical debate for two centuries." Two hundred years ago, an ever-expanding humanity came across an alien civilization, Ashiyyur, which resulted in an armed conflict between possibly the only technological cultures in the entire Milky Way. Christopher Sim was a history teacher from Dellaconda who became the leader of the Resistance and from the helm of his "immortal warship," the Corsarius, "spearheaded the allied band of sixty-odd frigates and destroyers holding off the massive fleets of the Ashiyyur," which eventually turned the tide as the other planets began to recognize the danger – driving the aliens back to their sullen worlds from which they came. But this victory came at a price. During his famous last stand, Sim was betrayed and abandoned by his crew with the name of navigator, Ludik Talino, becoming synonymous with cowardice. The names of the other deserters were lost to history and so is what exactly went down during that decisive and historically significant battle. 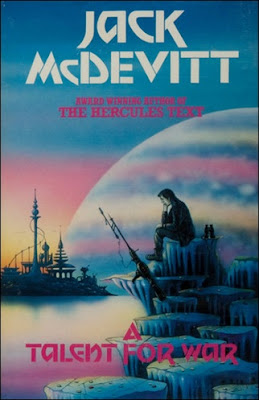 What did Gabe Benedict, an amateur archaeologist, knew that sent him tracking off into a region of space, known as the Veiled Lady, two centuries later? What is the connection with secretive journey of the CSS Tenandrome?

CSS Tenandrome is a big survey ship "involved in exploration of regions deep in the Veiled Lady," a thousand light years from Gabe's home planet, which returned under very mysterious and hushed circumstances. This churned the interstellar rumor mill. Officially, it was reported the ship's Armstrong units were damaged, but all kinds of rumors were flying around alleging it was either a plague ship or there was a time displacement that severely aged the crew members. There even rumors that the ship came across a new race of aliens or "an ancient fleet adrift," but "something among the encrusted ships" had "discouraged further examination" and returned home.

Alex has to take a deep drive into history to not only figure out what really happened two-hundred years ago, but what his uncle knew that could rewrite history. Admittedly, this makes for an engrossing, but slow-paced, read that takes some time to finish.

Alex has to gather and track down a ton of historical records, online and offline, war-time poetry, notebooks and watches simulated reenactments as well as visiting distant worlds, a historical society and even interviewing a representative of the Ashiyyur. But everything moves very slowly with only three points of action in the entire story. One very brief with the other two being saved for the end of the story.

So most of the story has either Alex sifting through information or talking with people, which is approach exceedingly rare in the detective genre and don't think it even has a name. I suppose you could call it a "research novel" with Katsuhiko Takahashi's Sharaku satsujin jiken (The Case of the Sharaku Murders, 1983) as the only example that comes to mind, but done on a much smaller scale than A Talent for War. The Case of the Sharaku Murders merely deals with an academic search for the true identity of a mysterious woodblock print artist who was briefly active during the late 1700s under a pseudonym. This makes the puzzle component of the plot is difficult to discuss, because it's as vast as our own star system. However, I was very impressed with the amount of world-building that was done. A massive, multi-worlds world that felt like it's actually populated with a human civilizations.

Over the years, I've read a tiny sampling of science-fiction mysteries and one thing always surprising me is that the earliest titles sketch a picture of the future in which culture and technology has stagnated or even regressed. Manly Wade Wellman's Devil's Planet (1942) takes place on a drought-stricken Mars in the 30th century, but technology is clunky with references to only 19th and early 20th century literature and culture. David V. Reed's Murder in Space (1944) takes place in mining community around an asteroid belt, but courtroom photographers still use flashbulbs and John Russell Fearn's The Master Must Die (1953) has snail mail between Earth and Mars. One stamp is enough to cover the cost of sending a letter from Mars to Earth. What a difference half a century makes! 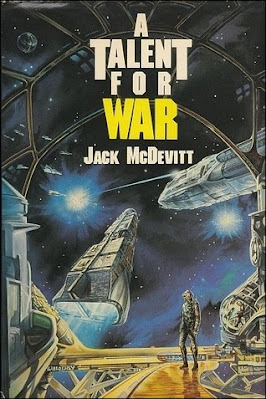 I'm not an expert, of course, but I thought technology was much more convincingly handled here with Alex's conversation with an A.I. version of his dead uncle being eerily predictive of the very recent developments with a controversial deepfake technology digitally resurrecting dead relatives or friends. I also appreciated that the Armstrong Drive was not used as a magic wand to simply transport between the stars, because there are some serious limitations as to its reach and maneuvering that required a ship "to materialize well outside star systems" – which "left the traveler with a long ride to his destination." A trip to Andromeda was still off the table. But what I really appreciated where the little historical and cultural touches in combination with current affairs playing out in the background giving you the idea all those worlds truly are swarming with humans.

Every chapter begins with an excerpt or quote from a fictitious piece of future literature, philosophy or commentary on the war and wished McDevitt had told more about the history and myths surrounding the various settled worlds.

Alex reminiscent about his own home world that "only an historian can tell you now who first set foot on Rimway," but "everybody on the planet knows who died in the attempt" and trying to find the wreckage of Jorge Shale and his crew was the first archaeological project of his life. But he never did. Alex also visited a settled water world, appropriately known as the Fishbowl, which shares its binary star system with a planet that was once the home of an intelligent species, Belarius. A now inhospitable place which houses fifty-thousand-year-old ruins that were "humanity's only evidence that anything else had ever gazed at the stars" before their running into the Ashiyyur. Belarius has been largely given up as it's "an incredibly savage place" crawling with "highly evolved predators" in its dense jungles. What a great backdrop that place would be for an archaeological, space age mystery novel. Something halfway between Agatha Christie and Predator!

But more important is that long-ago battle and the symbol Christopher Sim has become to the Confederacy, which is just as important two centuries later as there's a political crisis brewing in the background of interstellar proportions. Earth is holding "a referendum on the matter of secession" and there are constant clashes along the Perimeter with the Ashiyyur. So hostilities with the Ashiyyur might be "the cement that binds your Confederacy together" and "stem the political power of separatists." This makes finding answers to a 200-year-old mystery potentially dangerous and highly explosive.

McDevitt wrote an imaginative, richly detailed and engrossing story that constructed entire worlds with its own history around the central puzzle with the only drawbacks being the slow pacing and not having quite the detective pull of Hogan's Inherit the Stars. But you can probably put the latter down to having to setup an entire universe while exploring one of that interstellar civilization's many stories. So you can expect a review of his second novel in the not so distant future.