"You're not going to let him get away, are you?"
- Spike Spiegel (Cowboy Bebop, Episode 10: Ganymede Elegy)

David V. Reed was an American author who primarily left his mark on comic books, such as writing for Batman during the 1950s and co-creating the villain Deadshot, but he also tinkered with fiction and his work was published in various popular magazines – which included such publications as Amazing Stories, Fantastic Adventures, Astounding Science Fiction and Argosy. He seems to have been fluttering between the pulps and the slicks. 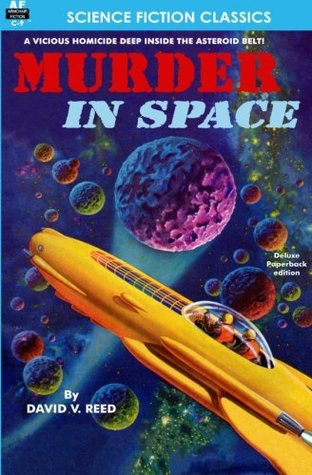 Murder in Space (1944) was one of Reed's experiments in fiction and originally appeared between the covers of Amazing Stories, but this hybrid-tale was doomed to drift to the darkest, deepest regions of literary obscurity. Sadly, I can see how this story failed to make an impact or leave a visible impression on any of the genres Reed attempted to incorporate into his story.

The book attempts to transplant a semi-hardboiled crime story with touches of the legal thriller, courtroom drama and even the Western to the edge of our solar system.

Regrettably, this mish-mash of genres fails to take off and is as poorly handled as the bits of speculative science, which showed asteroids capable of hosting life, but even I know space rocks usually lack the delicate atmosphere of a place like Earth – coming on top of a strange blend of contemporary and futuristic technology. On the one hand, the reader is expected to believe the solar system has been colonized with a vast array of advanced spaceships, but, on the other one, courtroom photographers apparently still use flashbulbs. Anyhow, I'm getting ahead of myself here.

The backdrop for Murder in Space is a settlement on a planetoid, named Mirabello, which is a lush mining community, with "its twin golden suns" blazing "merrily from a sky of flawless blue," and the place has the tendency to be a prosperous, peaceful space colony – extracting all of its prosperity from orium deposits in the surrounding asteroid belt. One of Mirabello's most well-known prospectors is Scotty Purdon: who owns the Silver Spoon Mine, "the famous bonanza," which is a well-kept secret and only Purdon knows its exact location. But, one day, Purdon fails to return from one of his regular mining expeditions and the person who is held responsible is the owner of the Wylie Lode.

Before he came to Mirabello, Buck Wylie served a prison term of six months for "killing a man in a gunfight over a mine in Tyuio," but the old gunslinger settled down to honest life when he found riches in the Wylie Lode. However, when Purdon's spacecraft was found in free space, "empty and drifting," a demolition bomb with a time-fuse was recovered from the vessel, which had a score of identifying marks tracing the explosive back to Buck. The bomb is a good example of the discrepancy between certain bits of technology in this book: the explosive was found on a futuristic spacecraft that could traverse the asteroid belt, but the fuse of the bomb needs to be lighted like a stick of dynamite.

In any case, Buck is hauled in front of a judge to be indicted for murder and the shadow of public suspicion came with a powerful enemy: John Murchison is a personal fiend of Purdon and the publisher of the local newspaper, The Mirabello City Twin-Sun, which he has uses a platform to form public opinion against the accused. So Buck's beautiful sister, Sue Wylie, engages Mr. Terwilliger Ames, Attorney at Law, to defend her brother. 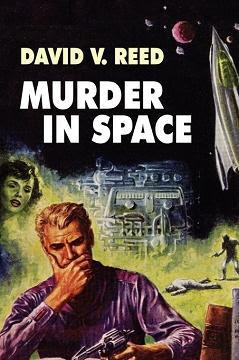 Terwilliger Ames came to the small mining planet from New York, but he soon comes to the realization that colonial space law is differs from regular law. One of them is that they don't "necessarily need the production of a dead body to indict and convict for murder." After all, the act of murder "is a simple crime when millions of miles of free space surrounds one" and a body can be disposed of "in any one of a dozen convenient hiding places in space" – which makes it hard to insist on a corpus delicti in every instance. Unfortunately, this interesting legal problem that space exploration and settlement brings with it is never fully explored and the body is exactly where it is expected to be. And this hidden location is eventually found by examining the fuel use and distance traveled by the spacecraft. I'm afraid that's all of the significant detective work done in this book. It's literary the furthest the plot got from moving beyond the set premise.

There is not much else of interest happening in this book: Ames runs into some snags, get shots at with a ray-gun, gets fired, faces possible legal repercussions and hears of a second murder, but everything slightly promising is dumped by wayside as soon as they're introduced into the story. Well, I guess Ames' excursion and adventure inside the asteroid belt resulted in one or two decent scenes, but was obviously done to give the story a Western flavor and show, once again, the hand of the painfully obvious murderer – who had already been confirmed guilty by the halfway mark.

The final portion of the book is an overlong, drawn-out courtroom scene, in which Ames, once again, goes over all the known facts in the case and lays a (simplistic) trap for the murderer based on a futuristic detection-device – which will provide the reader with a final groan. You'll know why when you read this one for yourself.

If I would put it nicely, I would say Murder in Space under performed in every possible way imaginable, but, to put it bluntly, the story is atrociously bad and poorly imagined. The plot is painfully obvious and drawn-out. Its vision of the future is poverty stricken and never went beyond the basics of rocket ships and ray-guns. Not a single reason is given to care about any of the characters. Honestly, the single genuine accomplishment of Murder in Space is that it can be mentioned in the same breath as Manly Wade Wellman's Devil's Planet (1942) and John Russell Fearn's The Master Must Die (1953) and The Lonely Astronomer (1954) as precursors to Isaac Asimov's Caves of Steel (1954) and The Naked Sun (1957). That and the fact that the book has made me want to revisit Cowboy Bebop. So that's positive, I guess.

Well, let's end this review on a semi-positive note by pointing out two recent reviews: the reason for lifting Murder in Space from my TBR-pile was a recent review by John Norris of The Bloody Moonlight (1949) by Fredric Brown – a much beloved writer of both detective stories and science-fiction. Secondly, I previously reviewed The Mystery of the Shrinking House (1972), which I enjoyed vastly more than the subject of this blog-post.

Finally, I hope to uncover something better for the next review. So stay tuned.
Geplaatst door TomCat on 7/17/2016