"You see... assuming this to be murder, we have to go look for a motive."
- Dr. Gideon Fell (John Dickson Carr's The Case of the Constant Suicides, 1941)

As was noted in my review of Death at St. Asprey's School (1967), I suffer from a chronic lack of enthusiasm for Leo Bruce's secondary series, revolving around the sleuthing activities of a history teacher, named Carolus Deene, which always struck me as the antithesis of his Sgt. Beef stories – an excellent series of bright, humorous and clever parodies of the detective story. On the opposite side of the spectrum, you'll find the dark, moody and plodding affairs of the Deene books.

Now, I do not mind that a darker, grainier and plodding mood replaced the light-hearted and comedic approach in Bruce's second series. That's not my (main) bone of contention with these stories. 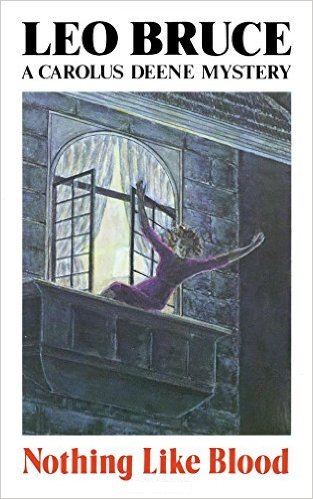 It is that, whereas the Sgt. Beef novels have pleasantly paced, naturally flowing narratives, the story progress in the Deene stories stagger, from one chapter to another, like a rusty automaton – which could have been a forgivable offense if it weren't for a severe deficiency of originality. I've read three books from this series and two of them have plots that leaned very heavily on recycled or even "borrowed" material, but this is, reportedly, par for the course for this series.

In the comment section of my review of Death at St. Asprey's School, Nick Fuller, who blogs (far too infrequently) at Escape to Adventure, opined about the Deene series that they are, at best, "very small beer" with dreary settings, plodding interviews and "gimmicky plots cribbed from better writers." Not exactly what a publisher is looking for in a potential cover blurb! I also found it slightly discouraging, but there was one specific book I wanted to sample, no matter what, for which I had a very obvious and predictable reason: the story in question was listed by Robert Adey in Locked Room Murders and Other Impossible Crimes (1991). Hey, I said it was obvious and predictable.

Nothing Like Blood (1962) is the eleventh Carolus Deene novel and this time the tangled mess of trouble is brought to him by an old friend of his mother, Helena Gort, who "had been one of those adventurous women who made arduous journeys in dangerous places" and "wrote lively books about them," but her temporary residence at an English seaside guest house proved to be one of her strangest experiences – where everything appeared to be rather sinister.

The place is called Cat's Cradle and the house is a long, plain-looking structure perched on a rocky headland, looking out over the sea, which has its cliff-side on the eastern side of the home. It was recommended by acquaintances of Helena Gort, who had a very comfortable stay, but when Helena arrives she finds all of her fellow guests on edge.

Some of them were very jittery and "an atmosphere of suspicion and intrigue" permeated the air. The source of all of the unspoken suspicion and unease seemed to sprang from the death of one of the guests, a Mrs. Mallister, who had passed away two months previously of heart disease. It was hardly an unexpected passing: Mrs. Mallister "had been under a sentence of death for some time" and she had been on her deathbed for days when the end finally came. So everything seemed above board, but was there anything more to her death? After all, there are "heart attacks and heart attacks." Or so the rumors go!

Well, Helema decided to keep a diary and the first half of the story consists of these diary entries, which are used to flesh out the problem, setting the stage for an impossible murder and introducing the characters, but the characterization is a bit of a weakness in this one – because all of the characters are defined by their eccentricities or lack thereof. There is, for example, a retired colonial bishop, named Grissell, who has the habit of lapsing into anecdotes, but can never remember whether his stories happened in such places Basutoland or Bloemfontein or Zanzibar or Zesfontein. It's somewhat annoying when used as a recurring and defining personality trait.

The diary entries cover chapters 2 to 9 and ended when the story began to drag itself out, which was also the point when Bruce introduced the locked room angle of the plot. It was a sure-fire way to get my attention.

A pair of holiday-makers from a nearby camp decided to take out a rowing-boat for a spot of moonlight peddling, but when they came close to the house they saw one window "lit up like a stage" and a woman was seen smoking cigarette on the stone balcony – when, all of a sudden, she took a dive over the edge. Right on the rocks below. Nobody else was seen on the stone balcony, the door to her bedroom was locked and the only key was found on the body. So, as to be expected, the Coroner's Inquest returned a verdict of suicide, but the explanation that proved this apparent suicide to be murder was surprisingly clever, original and well clued. A very simplistic trick, but one that's clever and fresh.

I expected an entirely different kind of explanation based on the presentation of the crime and the series reputation for cribbing plots, which made me settle down for a solution that was very similar to those from an episode from the Cabin B-13 radio program, namely "The Bride Vanishes," and The Whistling Hangman (1937) by Baynard Kendrick. As a consequence, I also settled down on the wrong culprit, but this may've, somewhat, saved the book for me. My very mundane, dime-a-dozen explanation was proven completely wrong by a far more competent solution that showed a bit inventiveness and was very well clued. It was even hinted at how it was possible that the murderer appeared to be invisible to the witnesses. The way in which the supposed suicide was tied to the apparent natural death was also somewhat off the beaten track.

So these (connecting) parts of the overall plot were pretty good, but, sadly, they're stuck in an unengagingly written, slow-moving and mediocre novel, populated with cardboard characters, which made for a very average and uneven mystery novel. Simply put: the plot deserved a better story.

Well, I'm not sure if and when I'll return to the Carolus Deene series, but my next Leo Bruce is going to be one of the last two Sgt. Beef novels on my TBR-pile, which are Case Without a Corpse (1937) and Neck and Neck (1951). Hopefully, I'll pick something better and easier to write about for my next review. Don’t touch that dial!
Geplaatst door TomCat on 7/25/2016